A rebound after divorce is the last thing you want to be in a man’s life. So, if you’re worried you are dating a man who is on the rebound, here’s what you can do. 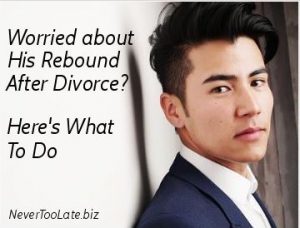 You’re looking for a serious relationship and you think you found the guy. Yay! Yet, there are a few little things that make you nervous. Sometimes everything is totally amazing, and other times you feel a little distance.

He did just get divorced and you wonder if this could be a rebound after divorce. He seems fine, but divorce can be rough emotionally, financially and more. So, how can you know?

Signs of a Rebound Relationship

First you need to know what to look for as signs of a rebounder. Here are a number of clues that indicate you could be in trouble, because he’s not really ready for the kind of relationship you want.

There are men who come into your life fast, creating a whirlwind that sweeps you off your feet. He wants to see you all the time which is very romantic. Finally, you feel desired, wanted and sexy. This is hot! After a long dry spell or one dud after another, this guy is a refreshing change.

Trouble is, when a relationship comes out of nowhere, it often fizzles out just as fast. He might need the attention, want to feel romantic or desired again himself, or just wants to be adored by a new woman to be sure he’s still got it. None of that bodes well for your heart girlfriend.

If you are thinking long-term, it’s your job to put the brakes on and prevent things from moving too quickly. You can hold him off a few days each time he asks you out, saying you aren’t available tonight, but what about Thursday?

Take time to vet a man to be sure he’s a good match before you rush in and get your heart ripped out.

2. He Doesn’t Want to Be Alone

Does he really want to see YOU or is it that he can’t be alone? This happens to men too, not just women. If he seems a little clingy or stays in touch day and night, that is not healthy behavior, especially early on in dating.

In fact, the clingy factor is a huge warning sign that he’s not emotionally healthy or independent. A new relationship can be just a distraction to avoid dealing with his emotions.

3. He Can’t Stop Talking about His Ex

This is a massive red flag! Don’t try to help a man get over his ex or heal from the pain of his divorce.  Whether he hates her or has nice things to say, stay away! If she’s still on his mind, he doesn’t have room in his heart for you too.

Women who take this on are usually dumped as soon as he’s feeling better. Then he goes on to marry the very next woman! Happens all the time. He won’t want to be reminded of his wounds and that’s exactly what you represent. Don’t do it.

4. His Divorce Isn’t Final Yet

When you date a man who is not yet divorced, he hasn’t taken time to heal. Even if he’s been separated for a while, he’s still married. I don’t care what he tells you. Everyone, man or woman, needs time to process the emotions of dissolving a marriage.

A man who is separated most often wants to play the field or can’t handle his wife’s rejection, so he has to prove that he’s still a desirable man. I myself was a victim of this and even though Jeff said all the right things, he ghosted me soon enough.

5. He Doesn’t Have Time for You

Some men like the idea of dating you, but they can’t seem to find the time. Even if things start out well, a rebound relationship tends to last 2-3 months. At that point, he may be faced with multiple priorities and none of them are you.

He says he cares, please be patient, and he wants to be with you. He just needs to finish ____ (fill in the blank – painting his house, a big work project, his taxes, etc. ) It doesn’t matter what the  excuse is. His actions clearly show he’s not ready or he’d be with you.

Don’t believe his excuses and don’t be patient. Move on to find a man who is ready now.

If you are even asking yourself this question, that’s a sign too. Your intuition or gut instincts shows up for a reason. Pay attention to those nudges from spirit that you might not be in a good situation.

I wish I had paid attention when my intuition told me Jeff didn’t care about me. But, I pushed away that inner warning, thinking it was just my fear. WRONG. The message was clear as day, but I didn’t listen and boy was I sorry.

Is the First Relationship After Divorce Always a Rebound?

This is a really good question and I did a bit of research just to be sure.  According to Psychology Today, there is newer research that says rebound relationships might actually be healthy. Now, the article doesn’t say they work out. But here’s what it does say…

Apparently, dating again without waiting too long, helps you build confidence about being “dateable.” That makes sense. So, if you are willing to date after a few months of recovery, (vs. years), people seem to be more comfortable with intimacy, trust and safety in being in relationship. That’s pretty interesting!

Are Willing to Be Casual?

Perhaps it all depends on your own status. If you’re just getting back out there, casual dating could be just what you need vs. trying to get serious quickly.  Go slowly and get comfortable with men and dating again. That’s how to get your sea legs back. Later, you can look for lasting love.

If You’re Serious about Lasting Love, Do This

On the other hand, if you are ready right now for a serious relationship, avoid the recently divorced man and you’ll avoid the entire rebound question. That’s just smart dating strategy and an empowering mindset that will keep you on the right path to find the love you crave.

Some women tell me they can’t help who they fall in love with. That is so not true.! If you know he’s recently divorced, or it hasn’t been finalized, and you want lasting love – move on IMMEDIATELY. Don’t let yourself get to know him and end up in love.

What’s your status? Are you serious about finding an epic love, but can’t seem to find a man who wants the same? Maybe there’s something getting in the way. Why not book a complimentary call with me? Let’s find out what subconscious blocks might be keeping you single and how I can help.