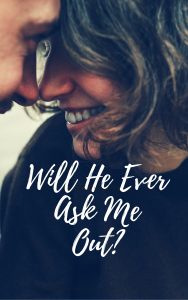 We had great conversations and have a lot in common. Nothing intimate happened for a couple months. We have many mutual friends so we end up at the same parties and get togethers. If he knows I’m going to be there, he will be there and ensure we end the night together.

He mentioned a while back that he didn’t think he was ready for anything serious. I told him I was looking for more of an emotional connection with someone. A few weeks later, we ended up sleeping together.  He texted me the following night to ask me about how my team did that day.

He doesn’t text me very often. It seems like he needs liquid courage to do so. If I text him he responds. He engages on my Facebook page regularly and didn’t do this before we were intimate.

His last relationship ended in February and he said she was pushy and controlling. His prior marriage was with a pushy woman as well so I haven’t initiated contact much. I really want this man to ask me out. I’m not sure if he’s being cautious because of his relationships or if he isn’t into me like I thought he was.

I would think that if all he wanted was sex he would disappear after he got it. While he does pop up here and there, he doesn’t make a move. I think he wants me to pursue him because that’s what he is used to.

My gut tells me not to pursue. I’m wondering if a man sometimes takes more than a week or two to sort out his feelings, especially if he didn’t think he was ready for anything serious. I feel he does like me and is attracted. What are the chances he’ll come around and ask me out and how long might that take?

Men are easier to understand than you might think. You just have to know how to “read between the lines” of what they say and do.This is one of my specialties – radically simplifying how to understand men.

First and most important he told you he did NOT want a relationship. When a man says this PAY ATTENTION BECAUSE HE MEANS IT. Believe it for this guy and believe it any time you hear this in the future. Men never say this if they don’t mean it. It’s the most honest thing he’s probably said to you.

So, not taking the next step to ask you out isn’t because he’s cautious or doesn’t like you enough, he just doesn’t want to have a relationship and that’s often what dates lead to. It’s so much easier to just bump into you and let it just be something that happens.

You say he’s used to pushy women. That’s because he rather not be responsible for what happens. This explains why you’re getting the feeling he wants you to pursue him. He can then absolve himself and say, “Hey, I told her I didn’t want a relationship but, she pursued me.” That’s why you are SO SMART NOT to DO IT. Don’t pursue men – it only leads to heartbreak.

He might be stunted emotionally – maybe for life, maybe just for a while. But here’s the most crucial question of all – how long are you willing to wait for a man like that? He is not whole – something is missing or not completely right. He may be a great person and a great guy, but that doesn’t mean he’d be great in relationship.

I’m not saying he doesn’t like you. I’m sure he does like you and is attracted or he wouldn’t stick by your side or sleep with you. But you want more than a man who finds you attractive – you want a relationship that lasts and deepens and he’s simply not capable.

Yes, there is plenty you like about him. But he’s missing the most essential element for a man you want to be in relationship with – DESIRE for a relationship. He doesn’t want it or he would do something about it. To make you “his”. This is why he bumps into you rather than scheduling dates.

Sadly there is absolutely NOTHING you can do because he needs healing and only he can take the needed steps.

The best thing you can do is come to grips with reality of the situation and who he really is. Have the self respect and awareness to recognize a lost cause. Rely on your own emotional maturity and skills for self-preservation to let go and move on.

There are other, better men out there who do want a relationship. Please go find one. I’m so very sorry to say this guy will never make you happy because he CAN’T. The answer to your question, “Will he ever ask me out?” sadly is NO.

1 thought on “Will He Ever Ask Me Out? Understanding Men”