If you’re asking, “Why won’t he tell me the truth?” and feeling frustrated with the man you’re dating, this post will help clear that up for you and more. 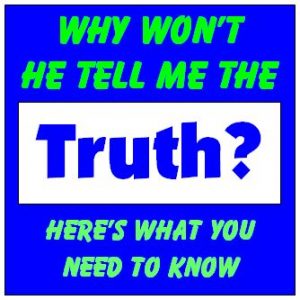 So you are seeing this man and he’s gotten a bit distant. You feel like something is wrong, in fact, you KNOW something isn’t right, but you can’t put your finger on what is going on. So you get up the nerve to ask him. Something like this comes out of your mouth:

“Why are you being distant?”
“Is something wrong between us?”
“Is there something you’re not telling me?”

Of course he says it’s nothing. He denies that anything is wrong at all. If you push further, he might blow up or worse, get even more distant. Why won’t he tell you the truth?

Sometimes you’ll tell a man you need to talk and that can be the kiss of death in terms of having a conversation. He seems to be totally avoiding you at this point. Ouch!

Women tell me they come right out and ask the man they’re seeing if he wants to break up or stop seeing each other. Again, this kind of question is often met with denial So, you feel worse and know you’re not getting any where. How are you supposed to fix this if he won’t talk to you?

Seriously, Why Won’t He Tell Me the Truth?

This painful question just keeps floating through your mind. Your curiosity gets the best of you and you end up thinking about this all day eventually. It seems so simple if he’d just ANSWER YOUR QUESTION.

Actually by the time you get to this point, his honest response, “Yes I want to break up,” would almost be a huge relief. Or if he’d admit he was cheating. At least you wouldn’t be in limbo-land any more. You’d know the truth and you could move on. It would hurt for sure but you can’t take it any more.

But, why won’t he tell me the truth?

Most men hate to admit they’re about to cause you pain. They don’t want any big emotional scene. Nor do they want to be the mean guy, even if they are pursuing another woman.

So here’s what they do – they AVOID YOU. They stay clear of the topic, become scarce, and change the subject. Whatever will get you off track works for a man like this because the LAST THING HE WANTS IS TO DISCUSS IT.

This is also why some men behave so poorly right before a break up – they act out hoping YOU’LL BREAK UP WITH THEM. Sorry to say, this is standard procedure for countless men at any age.

Please, stop trying to make things work. If you are prepared (and I hope you are) when things get this bad, your best move is to pull back too. It’s time for you to become scarce as well. Focus on yourself. Think about what will make you happy and do it.

For example, take really good care of  yourself. Get a massage or a mani-pedi. Go out with the girls. Watch chick flicks and eat ice cream. Read a new book or those magazines you never get to. Tackle one of those projects on your list. Do something creative. You have plenty of choices when you focus on YOU.

What does this do for you? It takes the focus off him and what you cannot fix. And it gives him a chance to step forward because if he was ever going to do it, this is his opportunity and he knows it. So if he’s not cheating on you or hoping you’ll leave him, he’ll sure know something is up when you go silent.

Breaking from your normal pattern of desperately trying to get him to talk will be a shock and send him a clear message. You won’t put up with his nonsense. And this gets communicated without saying one word. The silent treatment is as old as the hills, but still can produce results.

I’m not saying your man will definitely come back to you and try to work things out. But he might. And truly this is the only shot you have. Continuing to force the issue will not deliver any results. None that you actually want anyway.

His Reason Why Doesn’t Matter

Most women really want to UNDERSTAND WHY.  Why is he acting this way? Why won’t he tell me the truth? How come he is avoiding me? Why won’t he talk about it? But these questions will never be answered. You need to focus on why do you put up with such treatment? Who is he to behave this way around you?

It’s All About You

When you start to realize you cannot change men or make them do anything, you start to see the wisdom on focusing on you. What makes you happy? It sure isn’t him if he’s acting this way, avoiding you and not telling you the truth.

To keep your dignity, it’s time to realize the power to change your situation lies totally within you. That means you might need to leave him. Because you DESERVE BETTER. Why would you put up with a man who won’t be honest, won’t talk about things and treats you poorly?

The one thing you can change is YOURSELF. Walking away is the  most empowering thing when a man will not tell you the truth. This allows you to free yourself up so that when you are ready, you can go out to find love again with a better man.

How do you know you found a good match? You’re with a man who WILL talk things over. He’ll stick around to work things out. A good man shows that he cares by apologizing if needed. He values you and doesn’t want to risk losing you.

The right man for you treats you like gold and his word is like gold too. He keeps his promises and you trust him. Thankfully, he follows through and means what he says to you and others. A man who is consistent and shows you respect as you do for him. He lets you know he cares through his actions, not just his words.

My dating advice is to stop worrying about, “Why won’t he tell me the truth?” Turn this around if he’s acting this way, because that means he’s already half way out the door. Then pull back yourself and take care of #1 – that’s you babe.

This is the way to react to a situation with dignity. You’ll not only keep your self-respect, but build it in relationships. Hold your head high and know you are destined for a better man who will treat you in a loving manner because that’s his nature.

Be true to yourself and let a man go who won’t tell you the truth or talk about things. He’s not the only man on the planet. I promise.

9 thoughts on “Why Won’t He Tell Me The Truth?”