Wondering, “Why won’t he ask me out?” Many women go through this but here’s what you most need to know about understanding men who aren’t clear about their intentions. 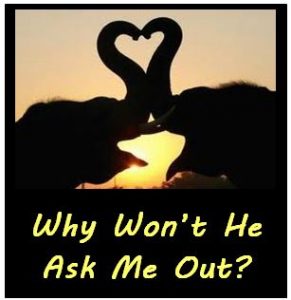 Why Won’t He Ask Me Out? That’s the Question

I sent a man I had met a few weeks previous a Christmas card asking him out for a drink sometime. We had chatted and kissed before I left unexpectedly. He texted me on the Tuesday evening the day after I posted it. We got on well with a few texts. Then he thanked me for the card and said he admired my courage.

I asked him if he was interested in going for drink. After a couple more texts he said we could organize something. I said jokingly that I had chased him enough and it was his turn. He said, “Ha Ha! I get the hint. OK talk soon, take care .”

It’s been 6 days and nothing. I assumed he would contact me or am I supposed to contact him? Why won’t he ask me out?

Thanks for your help,
Day 6 in Sussex”

Dear Day,
I know you feel confused so let me clear this up quickly for you. I’m going to make understanding men simple and keep in mind I do have compassion for you.

It’s time to stop chasing men. You can see it doesn’t work. His texting means nothing. You met him before and kissed, yet he didn’t call to see you again. Right there that tells you something about his interest level. He’s not into you enough to ask you out.

Like many single women today, you thought you’d get the ball rolling by asking him out. After sending it, he certainly would have asked you out if he was interested. However, he just commented that you had courage for asking. He flirts but doesn’t make a move. I’m sure that’s not the response you hoped for. And it’s not the sign of a man who wants to date you.

Then you told him you were done chasing him. Still nothing on his part. Six days have gone by without a peep so what does that tell you? If you’re still wondering, “Why won’t he ask me out?” it’s because he’s not interested.

Flirting and Texting Mean Nothing

A man’s flirting and texting show you he finds you attractive and may want female attention. But neither one indicates he actually wants to go on dates or is interested in something more. Only one thing lets you know a man is interested – when he consistently asks you out on weekly dates.

Your best bet is to meet men online, the apps or out and about and flirt with them. Then see who asks YOU out. If a man flirts and texts, but doesn’t ask you out within 7-10 days, drop him and stop texting. He’s going to waste your time, string you along, and potentially break your heart.

Flirting and texting are meaningless without him taking steps to see you and ask you out on dates. Check out this post which goes into detail about why men text. or this post on why men are vague about setting up dates.

Men Do Not Suddenly Become Who You Want

These men are not going to suddenly change or become serious about you. Stop asking yourself, “Why won’t he ask me out?” or hoping men will change. Don’t chase men, trying to get the ball rolling because you think they’re shy or busy. It’s not true and it won’t work.

It’s time to let go of thinking you’ll ever date this man and meet some new guys who demonstrate interest. Not by flirting or texting or kissing you, but by asking you out on weekly dates.

How to Know a Man Is Serious about You

I suggest you qualify men before getting attached to them. Observe his behavior and actions to meet you over a number of weeks. You are looking for a man who stays in touch, asks you out consistently [at least once a week], and has similar values. Any time you start asking, “Why won’t he ask me out?” that’s your clue he’s the wrong man.

The best thing is when enjoy each others company, laugh together, and have good conversations. A man who watches out for you, starts to include you in his life, introduces you to friends and family – these are all indicators that he’s serious about you.