This woman asked, “Why won’t he ask me out?” She can’t understand why he’ll Skype but won’t meet her. Find out what’s going on and get help with understanding men.

Please Tell Me Why Won’t He Ask Me Out? 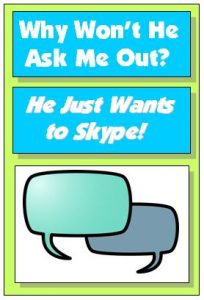 I met a guy on a dating website two months ago. We spoke on Skype for 3-4 days since he was out of country at the time and it was clear we have a lot of things in common. He asked me out on a date at karaoke but the day before the date we had an argument and I blocked him.

A month later he messaged me on the same dating website (I had a new account), asking me about how I am etc. We spoke again and since then we have been talking for over 3 weeks on a daily basis. He is rather busy, but I don’t believe in all this time he couldn’t find few hours to meet me.

Yesterday, he made some vague plans to meet over the weekend but nothing happened. So I told him that I don’t understand his behavior and we had a fight. I mean, he prefers to be at home on Skype for hours with me, instead of meeting me somewhere in person. What’s his deal?

Thanks for your help,
All Skyped Out”

Hi All Skyped Out,

The point of meeting men online and then dating is to separate the pretenders from the genuine prospects to find the right man for a lasting relationship. I see a number of things that should have caused you to disqualify this man as having real potential.

Reason #1 to Disqualify – Won’t Meet You
Given that objective, think about your experience with Mr. Skype. What have you learned from his behavior so far? He rather Skype from home than go on a live date with you in person. Is that the kind of man you want a relationship with? No way!

You want a man who wants to spend quality time with you – going places, seeing things, having dinner, listening to music, hiking or walking, dancing or snuggling in front of the TV. You are looking to enrich your life with romance, not spend time on the phone or computer Skyping.

Reason #2 to Disqualify – Fighting
I’m not sure what happened before that first date that caused a fight, but I would think that would also disqualify Mr. Skype. Do you want to date a man you fought with and blocked before you even met? That doesn’t make any sense to me.

Reason #3 to Disqualify – Won’t Make Time for You
I can’t help but think he would have cancelled your first date if you DIDN”T have that fight. He doesn’t really want to  meet you or he absolutely would have found time in two months. How ridiculous! Men who don’t have time to meet you are playing a game and wasting your time.

When a man is genuinely interested, he wants to meet you usually within seven days. Next time some guy wants to Skype, text or chat longer than seven days without meeting on a real date, don’t allow it. Suggest you meet to see if you click. If he has excuses, block him and move on.

Reason #4 to Disqualify – Vague Plans
When a man makes vague plans with you, he’s leading you on. He might be waiting to see what his best options are or he’s hoping to keep you interested by stringing you along. Either way, he’s again showing you he’s NOT Mr. Right.

A man who is genuinely interested, makes real plans with a day, time and place all spelled out. He makes an effort because he WANTS TO SEE YOU.

Reason #5 to Disqualify – Out of the Country
I have no tolerance for lying. I don’t really believe this man was “Out of the country” when he first contacted you. Why was he looking on dating sites while away from home? Sounds fishy to me.

Most people get online when home, not when away. My bet is he doesn’t live near you at all and so that’s another reason why he hasn’t met you in two months. Maybe he lives out of the country.

I advise all my clients not to bother with long-distance men – from far away states in the USA or other countries. Mostly these are men who are not truly available – they just want an ego boost by keeping you interested. They have no plans to ever enter a true loving relationship.

Even if they bare their souls and share intimate details about their lives, that still doesn’t mean they want a complete or real relationship.

Lastly, there are a lot of scammers pretending to be on business trips or in the US military and giving all sorts of reasons why they can’t talk on the phone or see you. Don’t even get started with a man who has limitations. Most of the time, they just want pen pals or emotional support, but some will want money. Be wary of this!

Why Won’t He Ask We Out? – The Real Reason

So what’s really going on here is this man is stringing you along. And you, having hope and trying to be positive, have fallen for his nonsense. When you get frustrated about trying to meet a man – that’s your single biggest red flag – DON’T BOTHER!

It’s time to dump him and move on. He’s clearly not available, might be married, might live far away, might not want or be capable of a relationship. Walk away, block him again on your phone and don’t be tempted by future contact from him.

There are better men, real men who want to meet a great woman like yourself. The more men you meet, the better your chances of finding a good man and the right man for you. He’s out there so make yourself available.