Home » Blog » Understanding Men » Why Is He Still Online Dating If He Really Likes You?

If he likes me why is he still online dating? Why would he do that when he says he’s into you? Find out six reasons why in this post and what you need to know to handle the situation. 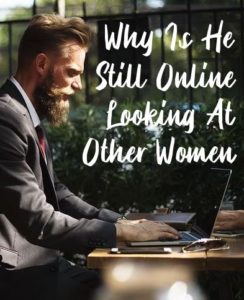 You met a great guy and things seem to be going well. Most weeks you see him more than once and he stays in touch by texting and calling.

You get along well and enjoy each other’s company. As you get to know him, you learn more about what you like about this man.

But, here’s the thing that’s starting to bug you. He’s still going to dating apps or sites. You think, “If he likes me why is he still online dating?” Good question!

This is such a confusing problem because you can tell he really likes you, so why is he still looking online? It sure is disturbing.

Why would a man keep his profile active or why is his profile is still active if he’s falling for you?

1. He Needs the Ego Boost

Some guys just can’t let go of the ego boost they get from connecting with women online. This is something only quantity can deliver.

They like interacting even if they have no intention of dating the other women. This is a self-serving date and shows a lack of emotional maturity which can be true for a man of any age.

Asking yourself. “If he likes me why is he still online dating?”  Then know he’s actually telling you something in a backhanded way.

If he’s still looking after two or three months, he’s not so subtly letting you know his ego comes first.

He might think of you as a “placeholder”. Both men and women are guilty of dating people who they enjoy spending time with even though you know they aren’t ideal or aren’t likely to fall in love.

So, he might like you and enjoy your company even though he is still actively looking for a better match.

If he recently divorced or just ended a relationship, chances are he’s not going to settle down right now.

He wants and actually needs to play the field and enjoy dating a variety of women. Men at this stage don’t want any restrictions or a woman to have expectations of him.

They say things like, “I’m not looking for a relationship, but I”m happy to get to know you and see what happens.” Walk away from any man who says this if you seek lasting love.

If you wonder, “If he likes me why is he still online dating?” this could be the reason.

4. He Doesn’t Want to Be Monogamous

There are plenty of men who have no intention of being monogamous. They like the player’s life and enjoy meeting lots of women and having their pick.

Hey, that’s his prerogative, but you don’t have to date a man like this. If you even think he’s a confirmed bachelor or a player, move on.

There are men at any age who might be slower to commit. And until the point when he IS ready, he’s going to continue looking.

He’s keeping his options open just in case he sees someone else who might be better. This is often referred to as “candy store mentality” where men think there might be a better woman just around the corner.

In fairness, men are often naturally slower to commit than women. That doesn’t mean your guy won’t come around.

Decide for yourself how long you are willing to wait for exclusivity. You might want that right away or you might be OK with waiting for six weeks.

Stick to your time frame and move on if he doesn’t come around or you’ll find yourself in love with a man who is still seeing other women.

Stop asking yourself why “If he likes me why is he still online dating?” and instead move on to find a man who IS ready to commit.

6. You Don’t Have an Agreement 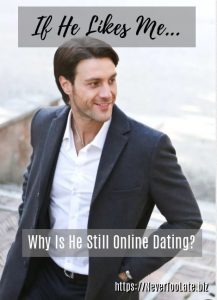 Never assume the man you’re dating isn’t seeing anyone else just because YOU AREN’T. Exclusivity needs to be discussed and agreed upon.

When to bring up exclusivity depends on the woman and your age. Over 40, there is no reason to hesitate on discussing this aspect of dating.

He’s not some 20 something guy you’re going to scare off. If a man over 40 runs when you ask about exclusivity, good! He wasn’t going to commit anyway.

Some women won’t sleep with a man until they know they are exclusive and he’s not going to be with any other women.

If that’s the case, then you might not wait 3 months. When he suggests sex, and he will, you can handle that in a couple of ways.

How to Get to Exclusivity

Don’t keep wondering, “If he likes me why is he still online dating?” Do something about it! How you go about this is extremely important.

Don’t make the mistake a lot of women make by attacking him or approaching this with harsh words.

All men have delicate egos and you wouldn’t want to be spoken to harshly either.  So, choose your words carefully. Here are three options to try.

Be Coy at First

If you say, “That does sound like fun, sometime soon,” that’s a playful and captivating way to put him off.

You’re letting him know you’ve thought about it, which he’ll find exciting. But, you are also saying you aren’t ready yet, without speaking the words. This keeps the chase alive.

Ask for His Advice

You can tell him (in an “innocent” way) that men are still asking you out on the dating sites and apps and you aren’t sure what to say. If you try this, you have to be willing NOT to say another word until he speaks first.

In negotiating (which s actually what you are doing) the person who speaks first loses the negotiation, so don’t utter a peep till he talks.

If he suggests you both take your online dating profile down at this point – great! If he is quiet for a long time or stumbles awkwardly, he is likely undecided.

And if he asks what you want to do or tells you to do whatever you feel is best – he’s not interested in exclusivity with you.

In this case, stay true to yourself and your desire for monogamy. Should you decide to just go for it, you’ll have nothing left to negotiate with.

Before you sleep with him is THE ONLY TIME you have power and it can be nearly impossible to move towards an exclusive relationship with a man like this, even if you’ve fallen in love.

When things heat up and you’d like to sleep with him, that’s the time to speak directly about exclusivity. Don’t keep wondering, If he likes me why is he still online dating – this is your time to find out.

You are clarifying an intimacy boundary for him. You can say, “I only sleep with a man once we become exclusive and pursuing a relationship to discover if we’re a good long-term match.”

However, avoid saying this on the first few dates because clients have told me some men say yes to exclusivity so they can sleep with you. But then disappear anyway.

This conversation only works after four or five dates, so the man has already shown consistent interest in you.

If He Likes Me Why Is He Still Online Dating?

Whatever you do, do not ignore this. It’s time for understanding men and if he’s still looking, he’s NOT loyal to you.

This won’t somehow magically change over time. If you talk about monogamy and he continues to look online, be honest with yourself.

The right man for you will not only accept exclusivity but will WANT you to be his one and only. And if the man you’re seeing doesn’t do this, admit he’s not the right man.

He might have many qualities you like, but if monogamy isn’t one of them, he’ll never be loyal. Do NOT settle here or you are sure to end up broken-hearted.

13 thoughts on “Why Is He Still Online Dating If He Really Likes You?”