A reader wrote in asking, “Does Online Dating Work?” Here’s her story and my answer on why it does work if you know what to expect. 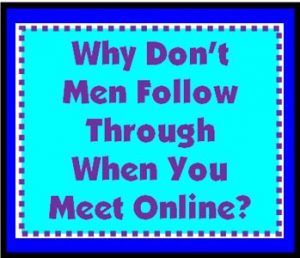 I’m a 52 year old divorced who was in a 14-year mostly disastrous marriage. Never thought I’d end up in this situation, looking for love again, but here I am. My problem is that I seem to be in a pattern with men online in which they will seem interested, pursue me, then when I agree to meet them, or give out my email address, or sometimes even just respond, they are gone.

I met one man and he called me a couple days after, said he wanted so much to get to know someone like me, asked me to dinner, but never called again. I’ve been on ChristianMingle.com, eHarmony (horrible), Our Time and now Plenty of Fish. Recently, a man from Plenty of Fish pursued me that seemed to have all the traits I like in a man, so after talking online for a week, he asked when we could meet and all I said was “next week?”. He responded “OK” and disappeared.

I admit in the beginning of each of these encounters I have to warm up to the idea of meeting them so I don’t respond right away to their messages (maybe hours or even a couple days) so it’s not like I come across as needy and desperate.

I just can’t figure out what I’m doing wrong. These are men in their 50’s and I was hoping men this age would be grown up. I look around me and wonder that it can’t be this hard or no one would be married. I will say that the reason I married later in life was because I ran into this pattern when I was younger.

I would appreciate your insight very much. Thank you.”
Marie in Minnesota

Thanks for sharing your questions – this is such a good inquiry because it happens to so  many women.  This is why I stress the importance of learning about online dating to women who read my blog. Knowing what to expect will help you deal with this situation more easily.

Not All Men Want to Date
What you are experiencing is completely normal It’s what any woman can expect from online dating. You’ll be contacted by plenty of guys who just want to email, chit chat, fantasize, text you forever, etc. But, for whatever reason, they are not serious about dating or maybe not serious about you.

Online Dating Is the Same as Any Other Way to Meet Men
Think about this like going to a singles dance. At a dance, out of all the guys in the  room, how many might ask you to dance versus ask you out and take you on a date? Same thing goes for a friend’s party. You might meet and talk to several guys. One or two might ask for your number. And none might follow up.

So online dating is exactly the same as any way you meet men. Some guys are serious, but most guys don’t follow through. That’s just how dating is.

You Aren’t Doing Anything Wrong
The main point here is this is normal and doesn’t mean you are doing anything wrong. It’s great not to act desperate. However, I encourage you to answer within 24 hours if you are genuinely interested in a guy. Letting a few days go in between might feel like rejection or a lack of interest to a guy. I agree you don’t have to answer within minutes, but even hours is fine and 24 hours is the outside.

Now that doesn’t mean that if you weren’t online recently and then went and noticed an email, you can’t answer men if it’s been longer than 24 hours. It’s just a rule of thumb. Remember, there are plenty of other women out there he can turn to or who may answer, so I don’t recommend holding off for long.

In addition, I also recommend exchanging only a few emails before meeting. A week isn’t too long, but you could also try two or three emails versus more. This way, you could potentially meet more men.

Look into why you need to warm up. What are your concerns? What is behind your resistance? What are you afraid of? Uncovering this will help you better understand what is standing in the way of meeting the right man for you. But now, at least you now know the answer to does online dating work is Yes!