Asking yourself why doesn’t he like you back? If it’s been a while since you last dated, you might not realize the 11 reasons why you simply aren’t a good match. Read on to find out what is preventing him from liking you and why you need to move on. 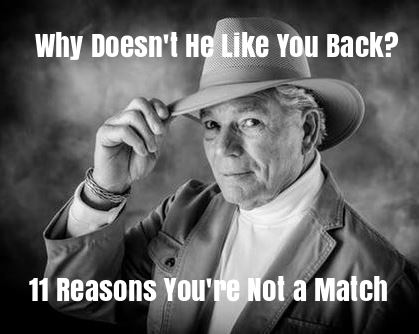 When you start seeing someone new, waiting to find out if he likes you back can be so difficult. The same is true for just having a crush or meeting a man once and wanting more. it takes two to tango, so you NEED to know if he’s interested.

And when it becomes obvious that he’s not interested, the painful questions begin. First you want to know why doesn’t he like you back? You’re attractive, smart, fairly fit, easy to talk to, so what gives? What could he possibly want that you don’t have?

You might never discover exactly why you weren’t the one for him, but I can give you 11 reasons why he might have chosen to keep looking. Some are about him and some are about you and how you interact with him right from the start.

1.You’re Not His Type

People look for different qualities in a date. That’s why it stands to reason you won’t be the woman for every man – in the same way all men aren’t right for you. You get that right? Sometimes you’re just not a good fit and there’s nothing you can do about it.

I’m sure you’ve heard about playing hard to get. There’s definitely truth to this strategy with men. I’m not saying you need to be impossible to get together with – that can turn a man off fast. But a little resistance makes you a challenge and interesting.

And that’s why when you make things too easy for him it’s a turn off. Maybe this will help you understand this. Most women complain about men who are too nice. You’ve probably met a man like this yourself. And his over-eagerness to please turns you off. He’s too easy so there’s no mystery if he likes you, no excitement and no sexual chemistry.

So, when you change plans at the very beginning of dating to make yourself available or let him know any day of the week is free for him, what’s the fun of that? It appears you have nothing else going on in your life and you end up looking DESPERATE.

Don’t serve yourself up to him on a silver platter making it too easy. Offer one or two nights you are free and let him make other suggestions if those don’t work with his calendar.

3. He Has Unreasonable Standards

Anyone can be guilty of this. When your standards are too high, you could easily end up single. That goes for men as well who might not be realistic with the qualities they seek. For all you know, the man you met, dated or want to meet is ridiculous with his demands for the right woman.

So, if he passes you by thinking the perfect woman will be next, it’s his loss. If you’re wondering why doesn’t he like you back, this is a man not to bother with.

4. You Got Friend Zoned

It happens for a variety of reasons – sometimes you end up in the friend zone. Perhaps you sound too much like one of the guys. Perhaps you seem competitive with him. Or maybe you remind him of someone else.

How you end up there doesn’t matter as much as the fact that you’re not going to get out of the friend zone and will need to move on. When asking why doesn’t he like you back, appealing to him only at the friend level is a problem.

Either a man finds you sexually attractive or he doesn’t. There are only two choices which means if it turns out he doesn’t find you attractive, there’s not one darn ting you can do about. As the Millionaire Matchmaker, Patti Stanger says, “The penis does the picking.’

With women, we’re different. With time, attraction can grow as a man does something sweet or endearing or he just treats you so well you can’t help but feel his magnetic charm affecting you. I’ve seen this happen over and over again.

One of my clients wanted nothing to do with bald men. Then we talked about it, she went out with a bald guy and fell in love! He had so many of the qualities she wanted she found a way to see past his lack of hair to see the amazing gentleman he really was. But, sorry, this doesn’t work with men.

Sometimes a man is just not ready for anything serious. He can sense you are, or he listens when you tell him, so he figures you won’t be open to something casual. Honestly, this is for the better. The last thing you want to do is date a man, fall in love hoping he’ll change and want a serious relationship. Why – because that doesn’t happen.

If a man comes right out and tells you, “I’m not looking for anything serious” or “I need my space but am willing to get to know you,” these are strong signals he doesn’t want a relationship. As a woman who values herself, it’s up to you to believe his honesty, know you can change him and move on. Women who don’t do this are left confused about why doesn’t he like you back.

You might meet a man you’re into, but he sees something in you right away that tips him off how you’re not compatible. A quality man is not going to hang around and waste your time or his. He’ll just move and  not call again.

This can be true even if it seems you both hit it off. Or he might text you for a while because you’re fun and have a quick wit. But, he’ll honor his assessment of you and not ask you out again.

8. He’s Into Another Woman

When you are using online dating sites and the apps, you are both meeting and dating several candidates at the same time This is to be expected and appropriate. The relationship begins once he asks if you want to be exclusive or you bring it up and he agrees.

That’s why it’s possible he’s already met a woman he likes, but is still checking out other options.  Women do the same thing right? This is normal for the early stages of dating and certainly explains the question, “Why doesn’t he like you back?”

Maybe you’re tired of being alone and dating and you just want to find the right guy already! Sometimes, being over anxious does come across as trying too hard. It’s very bit as unappealing as making things too easy for him.

Trying too hard can include too much eye contact on a date, too much head-bobbing agreement, or laughing too hard at his jokes. Other possibilities are texting too much, asking him to call you, or coming up with numerous suggestions on what you can do together. This is also similar to coming on too strong.

The best strategy is to simply relax and see what happens. Don’t push it. Hang back to see what he does to win you over and spend time with you. That’s how you know he’s interested – not from his texts or what he says.

10. You’re Divergent on Religion and Politics

Right now in the USA, our politics are highly polarized. This is why I strong urge you not to discuss politics at all. You can post your preferences in your profile – that’s the perfect way to let someone know which side you are on.

However, even if you are on the same side, talking about politics is NOT romantic. The same thing is true about religion. If you’re wondering why doesn’t he like you back after discussing either topic, now you know why you didn’t get a second date – or maybe a first!

There are men today who are still conservative and want a “good woman”. So, if you happen to be a sexy babe and dress less conservatively, you might turn off a small segment of single males. This is especially true for religious men or men who were brought up with strong religious ties, even if they no longer participate.

You could tone down your style. Or you could admit that you can’t appeal to everyone and be who you are! If you chase away a religious man because of your cleavage or tight pants, then he wasn’t the right man for you any way.

And there you have it – 11 startling, yet common answers to the question, “Why doesn’t he like you back?” The best thing you can do when looking for the right man for lasting love is not get hung up on some guy you’ve just talked or texted with, or only had a handful of dates. Learn how to let it go and stop driving yourself crazy.

The truth is even if you asked him directly, he wouldn’t tell you the truth. And he might not even be able to articulate why you weren’t the one for him. There’s no way to change this fact so drop it. Then move on and meet some new men so you CAN find the right one. He’s out there if you keep your eyes, mind and heart open.

In case you are now wondering how to know if he does like you, this post will spell it out.

For more info on possible dating mistakes you might be making, get a copy of my Free book 7 Dire Dating Mistakes that Ruin Your Chances for Love