Home » Blog » Understanding Men » Why Doesn’t He Call Sooner for the Weekend? 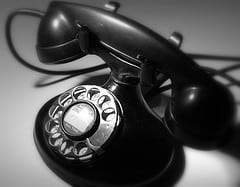 If the question, “Why doesn’t he call sooner?” is on your mind, here’s how to handle this difficult situation.

Does this happen to you? You meet a new guy for coffee and have a great first date on the weekend. He was easy to talk to, had a good sense of humor, and had good answers to your questions. You feel tentatively positive.

You go out and have another great date. Fabulous! Maybe this hasn’t happened in a while for you. Its so great to talk to a man who you can have a great conversation with. You smile, you laugh, you share similar ideas about life. This is good!

Then you don’t hear from him again all week except for some texting which is fun, but come on! This time, you can’t take it. You want to know what’s going to happen for the weekend. You just can’t stand this waiting game. You assume of course you’ll be seeing each other. And you are craving the answer to that question, “Why doesn’t he call me sooner?”

So you decide to be bold and just call him. What’s the big deal right? This is the 21st century and modern times. When he answers, he seems happy to hear from you. When you ask about the weekend, he says he hasn’t given it much thought yet. You tell him you are trying to make plans so you need to know when he wants to get together.

The good news is he suggests Saturday night and you are psyched! Another great date – that’s three! Things are going great now and you have some momentum. Then the next week ticks by with a few fun texts, but not much more. Thursday arrives and you start wondering, “What the heck? Is he not going to plan ahead again? Should I call him again? Why is he acting like this when we have such a good time?”

So, Why Doesn’t He Call Sooner?

Good question. As a dating coach for 10 years, I’ve got some answers for you about why he doesn’t call that might help clear things up for you. These are possibilities and not all of them will likely apply. But, you’ll get the idea.

1.  “He’s just not that into you” as Greg Behrendt says in his book by the same name. That simplistic answer cuts deep but has a great deal of validity. While you and your date may have a great time, it doesn’t mean the same thing to him as it does to you.

2. He’s not in relationship mode. While he certainly enjoys your company, he’s more relaxed about seeing you and this is not his top priority.

3. Last weekend you were free at the last minute, so what’s the big deal about making plans? You’ve probably got very little going on.

4. He’s not a planner and sort of lazy. Why make plans when he can get the women to call him and take care of it?

What’s a Woman to Do?

I know you are anxious to see him. I know it seems harmless to make a simple phone call to ask about weekend plans. But, DON’T DO IT!

1. If he’s not that into you, you might as well know as soon as possible. You delay finding this out if you don’t wait to see when he’ll call without your interference.

2. If a man doesn’t have the same dating agenda as you, for example, he’s into casual dating and you are seeking long-term love, again, you might as find out sooner rather than later. Don’t pick up the phone – wait to see what he does which will tell you a lot more about his agenda.

3  If you call a man because you are impatient or think its not a bid deal, THINK AGAIN. The last thing you want to do is give a man the impression that you have nothing else going on. That won’t make him want to pursue you. That doesn’t create mystique or make him curious about what you are up to.

When you have a full life on your own (or appear that way) you are much more attractive to men. Is this a game? Well yes, and one that’s not going away. It’s simply human nature to want what is less available – so don’t be available at the drop of a hat for the first 5-6 dates.

4. If he’s lazy and you don’t mind being in charge and doing everything in the relationship yourself – then go ahead and call him every weekend to see what plans you can come up with. But don’t get mad later when you are tired of being in charge of everything. Keep in mind that you trained him this way from the start so you’ll have no one to blame but yourself when you get sick of it.

The Best Dating Strategy is to Make Plans for Yourself

Don’t want to wait around till the last minute for him to make a plan? Then don’t do it!

Make plans of your own and go about your life. Find fun things to do with friends. When he calls at the last minute, you can say, “Oh that sounds like fun. Too bad I already have plans. Maybe next week. (Or I’m free Sunday or Tuesday) You can feel free to offer an alternate time which let’s him know you are interested. But, he’ll also get the message that he needs to make plans in advance. And if he truly has interest and wants to date you, he absolutely will do just that.

6 thoughts on “Why Doesn’t He Call Sooner for the Weekend?”