Home » Blog » Understanding Men » Why Doesn’t He Ask Me Out? And What Can I Do?

“Why doesn’t he ask me out?” Does that question plague your mind about a certain man? Find out what is likely going on and what you can do. 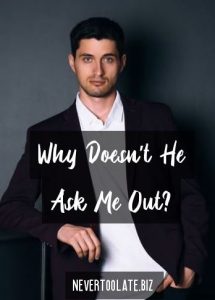 Tell Me! Why Doesn’t He Ask Me Out?

Has this happened to you?

There’s a man you see often at work, church or with a group of friends. He’s always flirty and seems interested. He might go out of his way to stop by your desk or sit beside you at a social gathering. The two of you really click and have a great time whenever you see each other.

So you wonder, (and rightly so) “Why doesn’t he ask me out? It’s so confusing! He might even talk about getting together or asking you out. But, he doesn’t take that step. No date ever gets set up. With some men, they might set up the date, but always cancel.

Arrrgh! What the heck?!? What is going on in his mind that keeps him from following through and asking you out?

Here’s a little peek inside a man’s mind about why this happens. You might be surprised and think these reasons couldn’t possibly apply to you. Let me tell you right now – yes, they do! Even if the situation is a little bit different. These are the reasons why he’s NOT following through.

Attraction Is Not Enough

Keep in mind this has NOTHING TO DO WITH ATTRACTION. Yes, he finds you attractive or he wouldn’t flirt or talk to you. Yet, his strong attraction does not mean he has any serious romantic intent. If he wanted to date you HE WOULD. But he’s not and there are a number of reasons why that is.

I know you might feel like I’m being harsh or lacking compassion. I DO understand how this feels, but I want my readers or others to know what’s going on.

Yup, he is married but doesn’t wear a ring, lives with a woman or has a girlfriend. Sadly, she doesn’t keep him from flirting his butt off with you and others, but she sure does curtail his ability to date. And yes, you’d be the OTHER woman if he did.

2) He Doesn’t Want to Date Anyone

No matter how much he flirts or how great you are together, he’s not looking to date anyone. Regardless of how into you he seems, he doesn’t want a relationship. He simply doesn’t want to go on dates or get involved. These first two reasons most often answer your query of, “Why doesn’t he ask me out?”

3) He Needs an Ego Boost

When you flirt with this guy, it feels really good to him. He soaks up your flirtatious energy and his ego gets the boost he craves. Maybe he’s a bit down, or life has gotten hard, or he yearns for female attention. It doesn’t matter why. He just needs the strokes to feel more confident, attractive and desirable and flirting with you provides that.

The flirty interactions you share are fun! It’s creative, sexy and highly entertaining. So, he does engages with you whenever he can to pass the time and feel alive. In fact, it seems like he can’t get enough of you when he’s with you. But, he still won’t ask you out and he never will.

5) He Looks Good in Front of Other Men

This is another version of the ego boost. When this man flirts, it’s usually for an audience. He not only wants your attention, he wants other men to see how you desire him. So, this really is all about him and not about you at all.

6) He Loves the Fantasy

Flirting with you gives him plenty of fantasy fodder. He might use your encounters when he’s alone or think about you when he’s with his woman to spice things up. Yuck, right? Happens ALL the time. Some people have very vivid fantasy lives.  So, when you ask, “Why doesn’t he ask me out?” the reason could be he doesn’t want to spoil the fantasy which is always better than real life 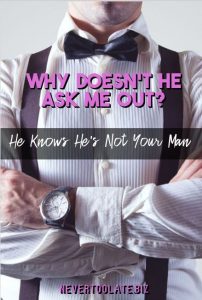 Sometimes a guy knows he’s out of his league when it comes to you. But, he still finds you incredibly attractive and loves the banter. He never acts on this connection because simply put, he knows better. It’s clear to him it would never work out. However, that doesn’t mean he can’t enjoy flirting with you.

8) He’s Not Capable of a Relationship

Not all men want anything consistent and there are those who  simply are not capable of a healthy relationship. They know this, so they avoid starting anything up with you. This is actually an act of respect since he knows he’s not the right man for you.

I’m sure there are other answers for “Why doesn’t he ask me out?” and I haven’t covered every option. But this is a good dose of reality for why a man refuses to take that next step with you.

Enjoy the flirting and let it feed your ego. Have fun with it. Practice your own conversation and flirting skills. Admit the exchanges are great for honing your skills and heightening your feelings of being a desirable woman. This prepares you for flirting with other men who ARE available as long as you can easily accept he’s not coming around and you’ll never date this guy.

Give Up on Him!

On the other hand, when these flirty conversations make you feel bad, avoid him! Tell him you no longer want to play his game. Be coy and cut him off or keep the conversations short by saying you’ve got to get back to work. Get him out of your heart and head because if you have to ask, “Why doesn’t he ask me out?” that PROVES he’s not the man for you.

You have plenty of options to keep your dignity and sanity. The only option not available to you is dating him or getting him to change his mind. Then move on because there are PLENTY more fish in the sea. Meet lots of men until you find one who pursues you, asks you out and wants a fabulous woman like you for a lasting, loving relationship.

Need help understanding men and finding the one for you? Schedule a complimentary conversation and let’s find out what’s keeping you from the love you dream of.