The question of why does he come and go from your life has driven many a woman to the brink of emotional exhaustion. Find out what this behavior is about. 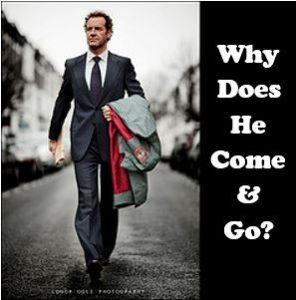 I’ve had a male best friend for 11 years that I’ve been in off and on relationship with. He’s always had feelings for me, and we would flirt constantly but still kept it on the friend level.

He broke up with his girl a year ago, came back to town and things heated up for one night. But, then he ended up back with her. I mentally distanced myself so I wouldn’t get hurt. He texts, flirts, vanishes and does a lot of future faking.

Currently, he’s mad at his girl and wants to move to live near me. He says we’ll have time to be together finally. All of his texts are aimed at hooking up and when I ask him if he’ll be coming to visit, he vanishes. He cannot commit to a darn thing except on his terms.

I don’t know if he’s worth it anymore. He’s come back around for years. Why does he come and go like that? I’ve called him out on things and he always comes back. Must be me? I’m tired of asking if he wants to hang out in person and him just ignoring me and ghosting.

Why Doe He Come and Go?

If you want to know, “Why does he come and go like this?” the answer (said with compassion) is you LET HIM. Yes, you allow him back in after treating you poorly, ghosting, ignoring you and more. Doesn’t sound like a best friend to me. In fact, by tolerating his poor treatment of you, you have let him know that you’ll put up with anything he does.

What does this mean and why does he do this? Maybe he can’t be alone, so he runs to you when he’s not getting along with his current girlfriend. He knows you are always there waiting for him to show up again.

My bet is he needs a lot of attention which is why reaches out to bolster his ego. And he probably wouldn’t mind the booty call either. He’s the kind of guy who will take and take,  pushing a woman to the limit. And, he likely always has a woman waiting in the wings, just to be sure.

I doubt he’s purposefully trying to hurt you. He’s too self-absorbed to think about anyone but himself. His emotional IQ is low on the scale. Can you say, “Me, Me, Me?” 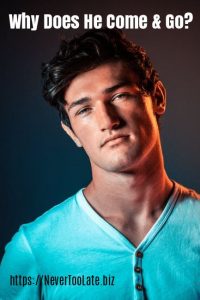 The problem is, none of this matters. As far as I’m concerned, asking why does he come and go is  absolutely the wrong question.

For you, what is far more important is to ask yourself why you put up with this? Why do you allow this kind of treatment? How come you let him back into your life? What makes you invite him when he never follows through on a visit? How can you say he’s a best friend?

Maybe you think he will change at some point. Many women hope a guy will come back and the relationship will return to how it was when things were good. Or you hope he’ll see the light and settle down with you?

I don’t want to burst your bubble, but if you were the right woman for him (and better still if he was the right guy for you) things would have already worked out. It doesn’t take years to gel. Either it’s right, or it’s not.

Women often say to me, “It’s just not that simple.” Uhhh, yes, it is. You could stop wasting time and free yourself up for the right man if you recognize the truth in this statement. This is how you make a healthy decision for yourself based on using your mind and not just your emotionally-based heart.

If I were your Love Coach, I’d suggest you stop this on again/off again relationship if you really want lasting love with the right man. Or, if this game hadn’t already been going on for years, I’d recommend you ignore HIM and see what happens.

Sometimes a man will realize he’s lost his backup woman and reappears to win you over and choose you as “The One”. At this point, it’s too late for that to work because he’s been playing the game too long.

When you type, “How can I get him back” into Google, you’ll get 2.3 million results! Tons of experts write about how to get your ex back. But what you need to consider is, why do you want him and will things be different?

A lot of woman hold romantic ideas that the relationship can resume as wonderfully as it was at it’s peak. I myself was guilty of thinking this. I spent 10 years thinking about my college boyfriend and how I could make him see what a mistake he made. That was a massive waste of my youth when it came to finding love.

How I Got Over My Ex

What turned things around for me? I went to my high school reunion and bumped into my ex’s current flame. (He didn’t go.) Pauline came bearing a message from Stephen, telling me he was sorry for how he treated me. I was floored. First, that he sent THAT message and second that she delivered it!

I decided I needed to speak with him. So, I wrote him a letter and asked him to have dinner. He agreed, but the caveat was Pauline would join us. Can you believe I went? (I used to learn my lessons the hard way – I don’t advise this at all.)

Stephen cooked dinner for us. We chatted about this and that as I schemed how to get him alone to say what I’d been thinking for 10 years. But as the night went on, I came to this amazing epiphany – there was NOTHING to say!

We had moved on and I saw that our love would never have lasted. We had gone in separate directions and weren’t a good match at all! Finally, I was free and didn’t feel anything for him any more. It was all in the past where it belonged.

It’s Time to Move On 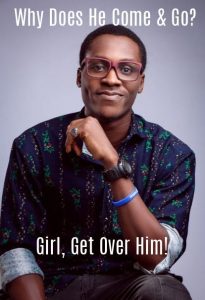 So, Lilah, the reason this man does come and go is not because somehow you’re not good enough. It’s more because you let him do it. Stop communicating if you’re tired of asking him to visit or his ghosting. Block him and do not look back!

If you’re ready for the real thing, let go of the fantasy.

Make a healthy choice for your future love life. Let him go and move on. You deserve a man who wants you more than any other woman. A man who chooses to be with you and wants a lasting, loving, supportive and healthy relationship.