The big question – why do guys make vague plans? Read on as I explain what it means when a man exhibits this confusing behavior. 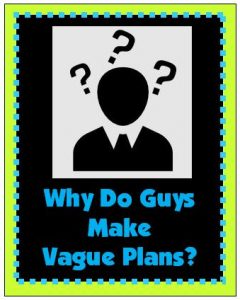 Should I Set Up the Date?

I met a guy online and we messaged a few times. There was some witty banter and it was okay but he didn’t ask me anything about myself or the things I wrote on my profile (big pet peeve). The conversation was okay. He asked for my number and I gave it to him. He texted me “hi, how are you?” and I replied and got one word answers like, “Great, awesome or okay”. No real conversation.

Then he said we should pick a day to meet. I said “Okay, call me to set something up after July 4th.” He called me on the 6th. Conversation was okay, mostly me asking questions or talking again. We don’t seem to have much in common.

We Should Set a Date

At the end of the call he said we should set a date. I said let me know when is good for you and where we’ll go (I like a guy to ask me out). He replied, “I’m free whenever” then we ended the call. I felt bad about not having a date set up so I texted him, “I’m free every weekend but this one so let me know.” He texted back, “I will.”

Ronnie, I’m confused! Am I being difficult? Is there a difference between a guy who talks about setting a date and a guy who actually sets one?

Thanks for your help!
Still Waiting”

No you are not being difficult. And yes, there is a difference between a guy who talks about a date and a guy who schedules one! It’s either passiveness or laziness but neither one is attractive or a good sign about his potential.

Why Do Guys Make Vague Plans?

Here are four of the most common reasons guys leave plans fuzzy:

1. Insecure – Yes, he might be insecure. But if he says something lame like, “Let’s set a date” to see how you’ll respond and you say yes, there’s no excuse for not setting a date right then. Your positive response should be all the ego boost he needs to take the next step.

Who wants to be with a man who can’t take this step? Most importantly, don’t make it easy for him by initiating or scheduling. You could end up dragging him every decision and be in charge of everything as time moves forward. That’s exhausting!

2. Hedging His Bets – He might be talking to several women at the same time. That’s not a problem – if you’re dating online or by dating apps, you know everyone is meeting lots of people. However, in this case, a “hedger” doesn’t want to commit until he decides who his top option is. That’s annoying and tells you his interest in you is not so strong. (Women also do this.)

3. Doesn’t Want to Date – There are men (and women) online who email and text but have no intention of meeting you. They are entertaining themselves, cheating without cheating or getting their ego stroked. So they talk about meeting but, never set anything up. And if you try to solidify plans, they are evasive or unresponsive.

4. Just Not that into You – He might think you’re an option, but he’s just not that into (thanks Greg Behrandt from his book He’s Just Not that into You). This is not a good sign for his Mr. Right potential. Your best option is to date men who WANT to get to know you which is the reason they pursue you, call, ask you out, pay etc. They do this to WIN YOU OVER.

[Read another post about guys who make vague plans]

How to Clear Up Dating Confusion

In addition, feeling confused by a man’s mixed signals often happens when you date men who leave plans vague or text a lot but are inconsistent with calls and dates. Remember, the way to know a man is genuinely interested is that HE WANTS to SPEND TIME with YOU.

In other words, if you don’t understand his behavior early in dating because he talks a good game but doesn’t go on many dates (at least weekly), he’s not interested enough to be the right man. The right man will not leave you hanging or feeling confused. That’s how you end dating confusion. Simply don’t put up with men who aren’t clear you could be the one.

Back to your question and this particular guy. You’re bored by the conversation and can already see he’s not making much effort. Those are lame, no effort texts he’s sending. That’s why it’s time to move on to meet a man who knows how to take charge. And who is engaging, fun and asks questions because he wants to get to know you!

Don’t bother with substandard men who
don’t meet your most basic needs.

Save yourself the time and aggravation and connect with some new guys who know how to date, have confidence, are curious about you and schedule dates! You deserve to be treated well, so start by treating yourself well and guarding against men like this.

3 thoughts on “Why Do Guys Make Vague Plans? Understanding Men”