Seriously, why do guys cheat instead of breaking up? That’s a million dollar question, but these seven reasons are simpler than you might think. 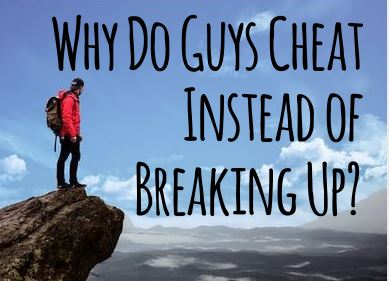 You’ve been dating your dream guy for months now, maybe longer. It’s been smooth sailing and you are so happy to have found one of the “good guys”. You have long-term plans with a real future. You’ve met each others’ families. And you couldn’t be happier…

How could he do this to you? What could he be thinking? You wonder what you might have done wrong and look back at everything in great detail, scouring your memory for anything that helps you possibly understand. How this could happen to you?

Trouble is some people just cheat. Men and women are guilty of this. Here are 10 reasons that can start to explain why on earth your man decided to cheat on you.

On a rare occasion, forces of the Universe conspire, bringing two people together when one of them might not be single. In this particular case, your man was not intending to cheat. Perhaps the woman was even aggressive. They met, one thing lead to another and bam! He crossed the line.

True, he didn’t use great judgement and if he had a bit of restraint the whole nasty situation could have been avoided. Especially, if he were the kind of man who had a strong intention to keep his promises to you. So, this is a WEAK EXCUSE at best.

2. Leaving You Is a Big Decision

Your man might have a lot on his plate and prefers to avoid some horrible fight and the emotional fall out. Nevertheless, he’s getting itchy and thinking about his options. The idea of leaving you is far too big a decision to face. Rather than deal with the situation maturely, he goes for a little something on the side.

3. Rules Don’t Apply to Him

Narcissistic men think the normal rules of life and law do not apply to them. In other words, cheating is a guilty pleasure that’s is okay for him and he thinks he won’t get caught. Simple as that. He’s sees a pretty woman and he’s off to conquer. Or there are other personality disorders that could apply too.

Maybe he feels more comfortable with the status quo. He likes being with you because you offer grounding, emotional support or balance. Perhaps you are a great partner and make his life much easier. Still, he misses the excitement of being with a new woman who adores him and boosts his ego. And there you go – he’s cheating.

Simply put, he just can’t face you like a grown man, be honest and tell you it’s over. Instead, he cheats which he knows you will NOT tolerate. That means you’ll do the breaking up for him. It’s a sure thing! This is why some men mess up and get found out so easily because they WANT YOU TO KNOW.

Katherine was visiting her daughter in another state. Her granddaughter spilled soda on her cell and it died. She called Rick, her man of 10 years, to tell him about it and he gallantly offered her his old phone. In fact, he shipped it off that same day. What a nice guy! He came to her rescue or did he…

When Katherine got the phone, she noticed a bunch of text messages from…another woman. This was mighty disturbing, but she decided to be brave and broach the subject. Rick replied, “Hey, I can’t be with a woman who doesn’t trust me and it didn’t mean anything,” Sure it didn’t. He could have cleared the phone right? They broke up the very next day.

Still asking why do guys cheat instead of breaking up? Here are five more gut wrenching reasons.

This is the new celebrity addiction rapidly trickling down to the masses. Sexual addiction is a real problem and shows up in many ways. One way is a need for sex with lots of women all the time. Bingo – the perfect recipe for cheating. But don’t let him tell you he’s sick and it’s a disease. How long are you willing to hang around to find out if he’ll heal his addiction?

Sexual addiction is like any other addiction including drugs, alcohol or gambling. Yes, people do get past this, but it can be at a huge cost to your self esteem and life enjoyment. Only you know if staying with him is the smart move for you, even if it might be the best thing for him.

The most likely place for a straying heart crops up at work. Of people who admit to infidelity, 36% say they had sex with a co-worker. It’s easy to see how this could happen if they are working hard late into the night. Especially on a business trip. That shared mission and closeness can definitely be seductive.

Yet, you would hope a man (or woman) would take their vows or commitment to exclusivity seriously. Sadly, when the pressure is on, sex does offer a big release and people are human. It doesn’t make it right by any stretch of the imagination.

Only 9% of men admit they cheated to get back at a spouse (as opposed to 14% of women). But this infidelity statistic sure proves it happens. I’m not going to say it’s your fault since I have no idea why he’s mad. And really, there are more productive ways to settle an issue.

9. He Gets a Rise Out of Being Bad

There is a certain excitement to having an affair that is undeniable. Being naughty is a thrill and adds to the sexual pleasure. The idea of risk and the possibility of getting caught is tantalizing. Fantasy can also play a role here as well as the desire for variety of partners. Let’s face it, lust on TV or the movies does look like fun, but that’s no excuse.

Think about it this way – what was the consequence of his cheating the first time? A fight and unpleasantness? Then you calmed down and took him back. The second time the fighting might have been more intense. But still, you took him back. So he’s pretty much assured you’ll forgive him for anything. I’m just saying…he doesn’t need to change when you make it easy.

The bottom line is this: Some men are honest, committed and loyal. These men will NEVER cheat because for them it’s not an option. That’s who I hope you are in love with – a man who adores you and is completely committed.

There are people who do manage to work through an episode of cheating, forgive the partner, and stay together happily over time. I personally know survivors of infidelity who are glad they stayed together. They listened to each other, worked on the relationship and recommitted their loyalty to each other.

You are the only person who can make that decision after discovering you’ve been cheated on. You are in charge of taking care of yourself and choosing the course that suits you best. I wish you a clear mind and inner strength for your decision making and lots of love because you deserve it.

4 thoughts on “Why Do Guys Cheat Instead of Breaking Up? Understanding Men”