Home » Blog » Understanding Men » Why Did He Text Me Out of the Blue? Understand How Men Think

Millions of women ask, “Why he texts me randomly?” Most times, the reason is simpler than you imagine if you understand how men think.

Why Men’s Communication Is So Confusing 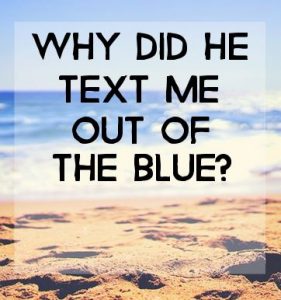 I dated a man who claimed he had a crush on me for 5 years. I had no idea but decided to give him a shot.

We dated for a month and I started to develop strong feelings for him. He told me he didn’t want a girlfriend, just wanted to have fun.

I cut off the relationship because I knew I would get hurt and we parted ways.

Two years later, I get a text from him. He says he’s been thinking about me and asked how I’ve been doing.

We texted for 20 minutes back and forth. Then a few days went by. After a week I texted asking if he wanted to get a drink if he wasn’t involved with anyone.

Why Leave the Conversation with Loose Ends?

Why would a man tell you he’s thinking about you, but leave the conversation with loose ends? Why would he text me out of the blue like that?

It seems to me he would have had enough respect to tell me if he’s involved.

Some friends say he’s afraid to go out with me because I rejected him by ending the last relationship. I’d love to know your thoughts about what happened.

I know this behavior looks really confusing but, that’s where I can help!

The first thing you need to know about how men think is that it’s nothing like how women think.

We have reasons and put feelings behind everything we do. Often our motivation is buried beneath the surface. Women try to say something or take action in a way that will not reveal our true feelings.

It’s not the same for men.

I’m not saying they don’t have deep feelings or motivations. It’s just that men are actually simpler to understand.

They are more direct than women for the most part. That is if you know what to watch for and don’t use your own feminine thought process to understand what is going on.

In other words, don’t go for the deep meaning. Go for the surface value. I’ll explain more in a minute.

Was His Crush Real?

So this guy claimed to have a five-year crush on you before asking you out. Was that true? Probably. But his crush was probably not relationship-oriented.

It was more attraction based and most likely he had been fantasizing about sleeping with you for five years.

Thankfully he told you the truth within a month, saying he just wanted to have fun and not get into a relationship. That actually was his way of being respectful and honest.

Breaking Up with Him

You were wise to end the relationship once you realized you did not want the same thing – a relationship and lasting love.

Why continue hoping he’ll change his mind? Good for you! So many women sadly fool themselves thinking a casual guy will suddenly become a man seeking lasting love. That doesn’t happen.

Why Does He Texts Me Randomly?

So why would a man text you out of the blue asking how you are?

For one thing, my bet is he’s still fantasizing about you. Men spend a lot of time thinking about sex and fantasizing.

According to WebMD, men think about sex 19 times a day compared to women 10 times a day. That’s nearly twice as much.

Maybe he also needed an ego boost. Perhaps he felt lonely or down. What better way to fix that than by texting to see if you would respond, text back and still be interested?

Turns out you were and that’s all he wanted to know. For him, that felt satisfying in itself! There’s no reason for him to take things further.

Like most women, you thought he must want to see you. He must want more or why even get started with a text? Sorry, you’re thinking like a woman again.

Hey, I understand and thought that way too when I was dating. But that sort of thinking will cause disappointment and could lead to a broken heart if you don’t catch it fast enough.

This is another classic example of how women think. He’s not afraid to see you because you rejected him.

If he were testing the waters by texting, he found out you’d be interested. But, that didn’t get him to respond to your request for a drink. So nope, not afraid.

When it comes to understanding how men think, and especially why did he text me out of the blue, remember that men often have a simple motivation.

Ask yourself this next time something like his comes up again, “Could this be a way to boost his ego?” If the answer is yes, you can still respond or participate, just don’t think there is a deeper meaning.

Now on a rare occasion, a man’s interest might blossom into something more. He might decide dating you is a good idea and that you could be the one. The point is don’t think he’s serious from the start.

His attraction to you is not a sign of lasting romantic interest. But if you can keep yourself in the present moment vs. forging ahead to how great the two of you could be together, then you can date him and enjoy it.

How to Avoid Disappointment

If you are reading this and are often disappointed by men and why he texts me randomly, the best solution is to adopt the mindset I call “POSITIVE NEUTRALITY.”

You can be optimistic about a guy, but don’t think he’s “The One” until he proves that to you over 2-3 months.

After he makes a consistent effort to get to know you, stay in touch and go on weekly dates (or more) – then you can start thinking he has potential.

This is how you guard your heart while enjoying dating and avoid premature attachment, disappointment or a broken heart.

Thankfully, in this case, you didn’t get ahead of yourself. And now you know that his texting didn’t mean anything about your future or want to see you again.

It was just something he did at that moment to feel better or satisfy his curiosity.

If you look at understanding how men think in this way, you’ll have a much easier time dating and finding love.

Ready to find out how I found the man I married and discover the proven strategies for midlife dating so you can find love too? Click here to get a copy of my flagship guide to love after 40 that has helped so many midlife women just like you.

4 thoughts on “Why Did He Text Me Out of the Blue? Understand How Men Think”