Home » Blog » Books, TV, Movies, Web, News » Where to Meet Men in NYC Like the Real Housewives of New York

Want to know where to meet men in NYC? As a huge fan of #RHONY, I’m going to share their favorite hot spots so you know where to go. 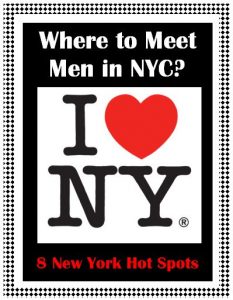 This season and last, all the Real Housewives of New York are single. That means the Bravo TV camera crew followed them around as they went out to meet quality men.  Below I’ll share six bars they frequent, plus two more where my own private dating coaching clients have met men!

The Regency Bar is a favorite of Sonja’s and Luann hangs out with her now husband – Tom. Of course it’s also the scene of Tom’s famous cheating episode. (Or perhaps more than one.) Sonja says this bar is best for the well-behaved, since it’s at Loew’s Regency Hotel and has plenty of glass making it similar to a fishbowl.  Keep in mind everything you do can be easily seen by everyone.

On the other hand, Beautique has a special backroom club in the basement which is dark and secluded. You’ll have to impress to gate keeper to get in. Sonja says if you want to drink a little too much, no one will notice here. Good to know Ms. Morgan, thanks. I read a post by Madeline and Ellie, two local, 20 something journalists who were disappointed by the old men to hot young women ratio. Hey, maybe it was just that one night.

This season (2017), Ramona met friends at American Cut and the joint was jumping. A steak house is always a great place to meet men whether in New York or any city. This one has two locations, in mid-town and Tribecca.
At one time The Carlyle was New York’s top luxury, residential hotel and gathering place for socialites. Now called Bemelman’s Bar,  the walls are hand-painted with whimsical art by Ludwig Bemelman who created the children’s book series “Madelaine”. Seems like unusual decor combined with dark wood, warm brown leather and alcohol. Yet, they say its ideal for private conversation with quality men.

Ramona is also a fan of Raoul’s which is a French Bistro in SoHo known for the best burgers in town. However, they are only available at the bar.  If you have a hankering for quality chopped meat and men, stop in and chow.
Next up is The Bar at the Baccarat Hotel which features a stunning black and white checkerboard floor,  crystal chandeliers. The place is famous for the very long bar you can belly up to. The perfect venue to mingle with men right at the bar where they order drinks and maybe one for you too. You want to know where to meet men in NYC? This is it!

My private dating coaching clients have told me about two other rockin’ places in NYC. Recently reopened in May, 2017,  the Campbell Bar is housed in the office of railroad executive and millionaire John Williams Campbell. Located in Grand Central Station, it was originally called Campbell’s Apartment. The bar is well-known for the ornate, Florentine-style decor.

While there, poke your head into the second bar called Campbell’s Palm near the entrance. (It’s the one with palm trees). And, check out Campbell’s Terrace located where the old taxi stand used to be. A huge awning on Vanderbilt Avenue boldly announces the venues which are no longer a secretive hideaway.

Last but not least, The Refinery Rooftop has been named best hotel bar two years in a row (2016 and 2017). Once a hat factory in the garment district, this lively bar and restaurant has a spectacular view of the Empire State Building. Plus they have live music which adds to the ambiance.

Wondering Where to  Meet Men in NYC?

So, with eight highly recommend night spots to visit attracting “men of means”, you are sure to up your chances of finding love. Please let me know if you meet someone special!