Home » Blog » Understanding Men » What Should You Do When He Won’t Commit But Won’t Let Go?

Your man – when he won’t commit but won’t let go! What are you supposed to do about this often painful situation? Here’s how to get a decision out of him. 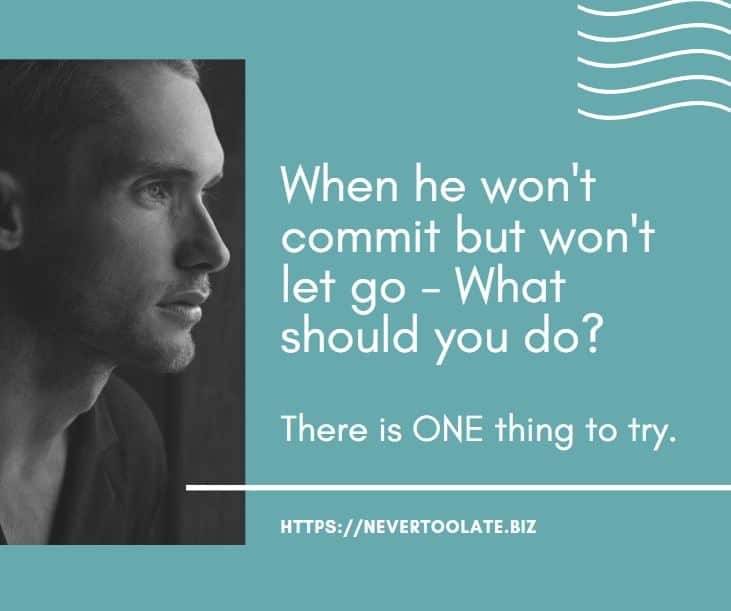 The man you love is driving you absolutely crazy! He doesn’t want to define the relationship or he doesn’t want to even call you his girlfriend. No titles is what he says which infuriates you completely.

Perhaps he doesn’t want to talk about the relationship and where it’s going. He’s not sure he wants to settle down even though you see him all the time.

Or you see him often, then he disappears for a while as if he’s retreated to the “man cave”. But then he comes back, acting like nothing happened or nothing is wrong. Or worse that he was never gone! He won’t commit but won’t let you go either.

What the heck is up with this guy? You’ve spent WAY too many hours talking to your girlfriends, desperately trying to figure this out. If you could just UNDERSTAND what the problem is, it feels like you could find away to work things out. Of course he’s not too into talking about the relationship.

On And Off Relationship 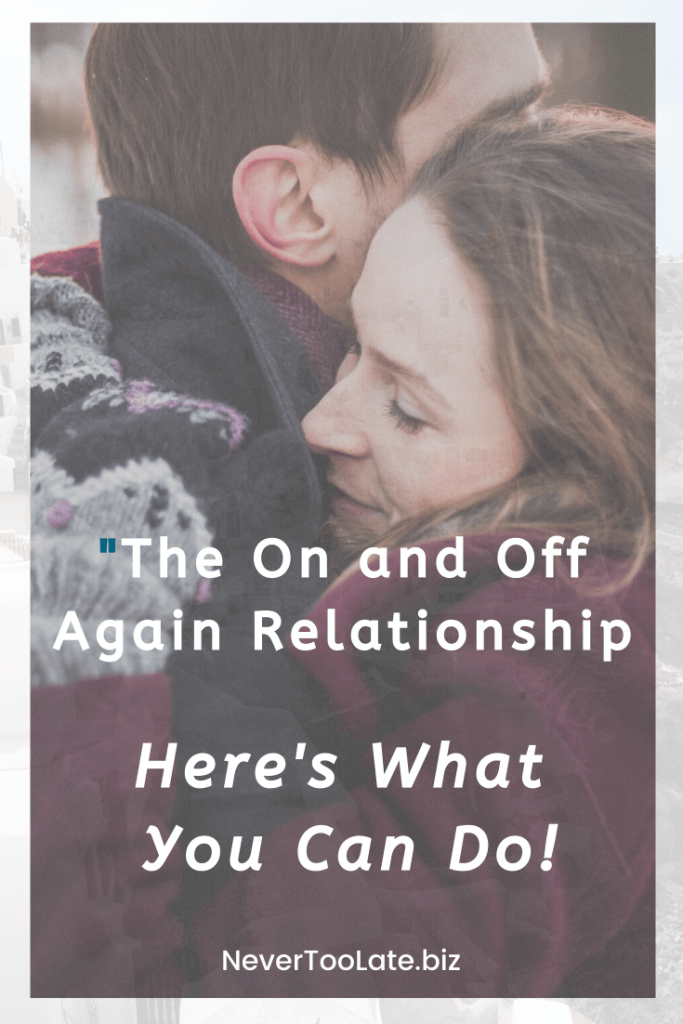 No matter what the reason, you really love this man and you just know you could make this work. Which is why it hurts all the more to not be able to discuss things or figure out the reason out of him for his antics and disappearances.

After all, if he really didn’t want you, why would he keep coming back and saying how much you mean? It seems like he won’t commit but won’t let you go. and where does that leave you? How can you survive this on and off relationship?

Honestly it feels like he’s dragging you through the mud with a team of horses and sometimes you feel like you just can’t take it anymore. Why can’t he just make up his mind? And why does love feel so good and then so incredibly BAD?

If this sounds too close to home about your relationship, let’s step back and look deeper into what is going on. One thing we know for sure is that he won’t commit but won’t let you go either. That hot and cold treatment leaves you up and down emotionally.

So, hear me out and think about this with me for a moment. He’s back and forth – but YOU are the constant. In other words, you are always there. No matter what he does, you are there for him and willing to take him back.

Sometimes women going through this kind of thing pride themselves on how they are always there for their man no matter what. But, thinking a bit deeper, is that really your best choice?

Why He Won’t Commit But Won’t Let Go 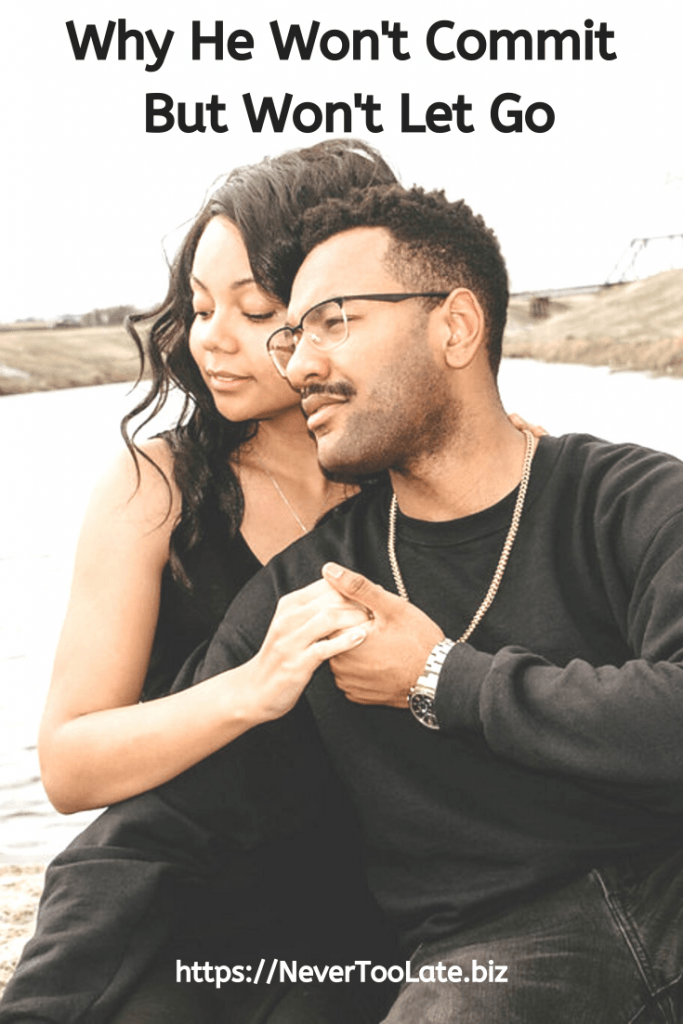 While he is inconsistent and hot and cold with you, YOU are the one who is consistent. He can count on you right? But what’s in that for you? If he was going to REALLY love you for it, wouldn’t he show you some respect and treat you right?

The difficult truth is (and I realize you might not like hearing this), there is no consequence for his inconsistent behavior. Nope, you might feel angry and tell him so, but you take him back with open arms. Every time. Like clockwork.

You are totally predictable.

That behavior on your part sends a message loud and clear to your man – “She’ll still be there no matter what I do.” He has nothing to lose by committing to you! So why would he?

This is where things get REAL. His back and forth behavior about seeing you is a a huge telltale SIGN. See, how he treats you is how he feels about you.  Whether he can’t decide if he wants a committed relationship or wants you, either one is not good for you.

You are allowing his indecisiveness to run and frankly ruin your life. This is the worst roller coaster you’ve ever been on because it affects your emotions and strikes deep into the core of your heart.

I bet you are often unsure you can take this any more and have said that to your closest girlfriends. And yet, you do.

You love him right?

Do You Love Yourself?

At some point, you’ve got to realize how unhealthy this is for you. This kind of on and off relationship crushes your self-esteem and takes a big chunk out of your sense of self-worth.

And, any time a love interest threatens your emotional state like this, you have GOT TO QUESTION IT’S VALUE. How he he worth that to you?

No man, no relationship is worth this kind of pain, that you should suffer from such disrespect and look to yourself wondering what you did to deserve this kind of horrid treatment.

Here’s what you did. You didn’t love yourself enough to WALK AWAY.

That’s right. When you get into this sort of pattern with a man you love, there is little choice if you are at all concerned with self-preservation. It’s time to take care of yourself and become your own #1 priority. 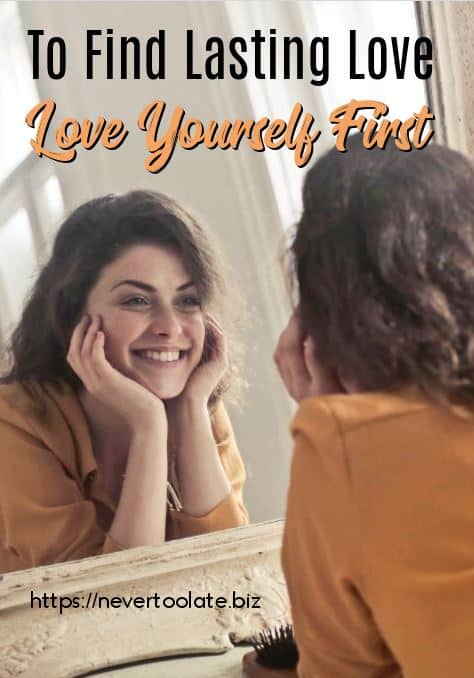 What does that mean to love yourself first? It means that you decide it’s time to establish a boundary. To draw a line in the sand about what you will and will NOT put up with. It’s time to decide if it’s him or YOU.

Because that is what it boils down to girlfriend. This is the GET REAL part.

You must decide to take care of yourself and that means you will no longer put up with his nonsense. If he won’t commit but won’t let go, the you have to do it. Yup, the only choice is to let HIM go if you want to to preserve your dignity, self-esteem and mental health.

I realize this may seem impossible for you. Sometimes women actually end up addicted to a man, even if he treats them poorly. They keep holding on hoping he’ll come around, fall back in love and be the man of their dreams.

But that NEVER happens. Men don’t magically change back to the nice guy they were at the beginning. I know, I lived this too.

If this resonates with you, I recommend this amazing book by Robin Norwood – Women Who Love Too Much.

Try This One Thing 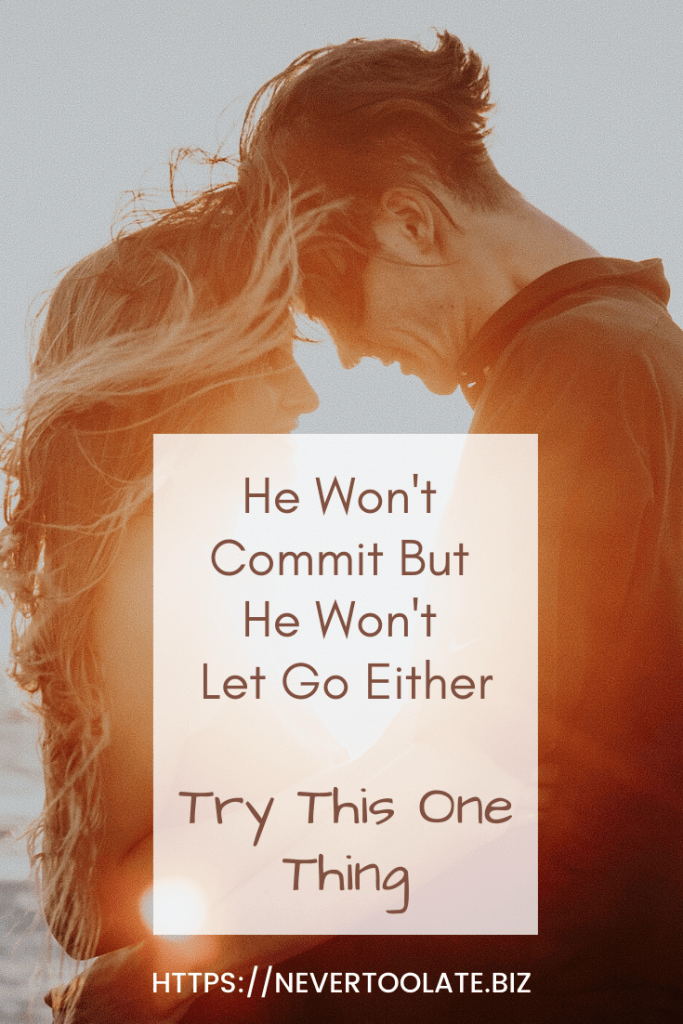 OK, maybe you’re not ready yet to let go. You want to force him to make a decision once and for all. So you are willing to try just one more thing. That’s fine and worth a shot. This way you won’t wonder if there was one more thing you could have done.

Well this is that one thing. Tell him you can’t handle the relationship the way it is anymore. You are ready to walk away. Unless…he wants to commit and move forward in the relationship. Briefly explain what that means to you.

You might say you want to see him every weekend and no disappearing with apologies later. And he must keep his promises to you. Or you will walk away and shut him out FOREVER

Then you make this essential PROMISE TO YOURSELF. When you give an ultimatum, you MUST follow through. So when you say forever, you mean it without any wavering. That’s the only way to end this torture and get your self-esteem back.

You’ll delete his social media accounts because you will no longer want to know what he is up to. You’ll block him on your phone because you do not want to talk to him. There is nothing left to say.

After this kind of talk, one misstep on his part and he needs to be out of your life. For good. He’ll have shown you (which he already has) that he is NOT CAPABLE of the kind of relationship you want and DESERVE.

Is There Any Hope?

On a rare occasion, with a man who does love you, but is on the fence for his own lack of emotional maturity, he might decide to grow up and come around.

Please don’t hold your breath or put stock in this. It’s not likely, but the possibility does exist in the most infinitesimal of ways.It’s understandable that you want to at least try so go for it.

Just know you have to be brave and strong and don’t turn back when your man messes up that one last time. You’ve got to love yourself enough to move on, heal and then look for a man who is relationship ready and wants to commit to a wonderful woman like you.

If you are ready to let go and need some support around this, love mindset coaching can help. Let’s see what can be done to get you through this painful situation.