Wondering what do his mixed signals mean? You’re not alone! Sometimes a man’s behavior is confusing. Let me radically simplify understanding men for you as I answer this reader’s question. 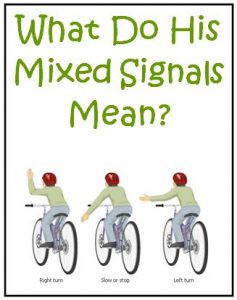 This is a complex situation. I went on a date with a guy whom I found really unattractive. But he has a great personality!  So I let him down very nicely and suggested we be friends.

Since then we have been talking on the phone every day.  I started thinking differently about him. I got to the point when I realized maybe I could live with the looks.

He suggested going on vacation together. I said OK but I would like to meet him for dinner a few times first. I had hoped to hint then that I might have changed my mind. He avoided meeting.

Then in last message he shocked me my talking about a good date he just had! He said they went for dinner and it was delightful. Then he had the nerve to switch gears and talk about our vacation again!

I was so angry, I texted back “Why don’t you go on vacation with HER”. Since then it’s been total silence. Do you think he was he trying to make me jealous? Should I cut my losses and stop communicating with him? I’m so confused about what to do.

You are right – this is complicated!

First, I applaud you for working at being open to his looks and taking time to discover he has other good qualities that would be good in a romantic partner. Very open minded of you! Sometimes attraction can grow, although not always. But taking a shot at it was admirable for sure.

Second, I agree with you – he is sending mixed signals about what he wants. Why would he tell you about dates with another woman and then follow that up with talk about a vacation with you? That makes no sense at all. If you have to ask, “What do his mixed signals mean?” that doesn’t bode well for a potential relationship.

I also agree that before going on vacation, you need to have several dates. You have to know someone before you take a trip with him. Spending 24 hours a day with someone you don’t know isn’t smart. You won’t know how he’ll be in person.

Phone Calls and Texts Are Not Enough

Phone conversations are not enough to really know a person before traveling with him. Plus, think about this – often a weekend trip is a right of passage. That usually happens after two to three months of dating and is a sign the man is feeling more serious about you. You are nowhere near that point.

You were wise to suggest this as a next step. Getting to know him in person is vital before taking a trip. Yet he avoided this? That makes no sense and is suspicious if you ask me.

How Can You Clear Up this Confusion?

You might be tempted to ask him directly what he”s up to. You could ask him what his intentions are towards you. However, even if you asked him these questions directly, I doubt you’d get an honest answer. That’s one thing I know about understanding men – being direct usually doesn’t work.

He would probably be evasive or change the subject. He might make up something and tell you what he thinks you want to hear. Some men are really good at this technique.

Most likely he would stop calling because he got caught at his game. Luckily you pushed him away by suggesting he take the other woman on vacation. Smart move! That shows you value yourself and have held on to your dignity.

Is He Playing Games with You?

It seems to me that he is playing games although I don’t know if he’s trying to make you jealous. When a man plays games, I never try to figure out what it’s about. I just tell my clients to, “Walk away”. For this reason I recommend not wasting time asking him anything. Why bother?

Instead, the simplest, smartest thing to do is move on. Something is not right and that automatically makes him the wrong man for you.

My dating advice for this situation is to stop communicating right away, block him and move on. Blocking him keeps you from getting sucked back in and giving him the benefit of the doubt. He doesn’t deserve it.

You want a man who wants to spend time with you, not just text or talk on the phone. I tell my private clients not to waste time with men who don’t ask you out and go on weekly dates. The smart thing to do is establish a “No Excuses” policy for yourself. A man might have a business trip or a vacation so you can give a him a one-time pass, but no second chances if he goes beyond a week without seeing you again.

Know Your Value as a Woman

A confident woman who knows her value doesn’t get caught up in wondering “what do his mixed signals mean?” She simply moves on knowing better men are out there. She doesn’t put up with substandard treatment, nonsense and excuses because she knows she is worthy of a better man. They are definitely available and out there to meet!

Men Who Are Relationship Ready Will Not Confuse You

Good men, for the most part, are not likely to be confusing. Because of their own clarity, they are more consistent in pursuing a woman they like. They keep promises, make plans, call and want to see you. That is normal behavior for men who are relationship ready.

You Are on the Right Track!

The good news here is you were willing to be open to see who the man really was and noticed some good qualities. Even though he’s not the one, if you are open like this when you meet new men, you will find a good match. You are on the right track!

4 thoughts on “What Do His Mixed Signals Mean? Understanding Men”