Discover unicorn magic and healing at sacred sites with empathic clairvoyant, David Winters, in this episode of the Breathe Love & Magic podcast. 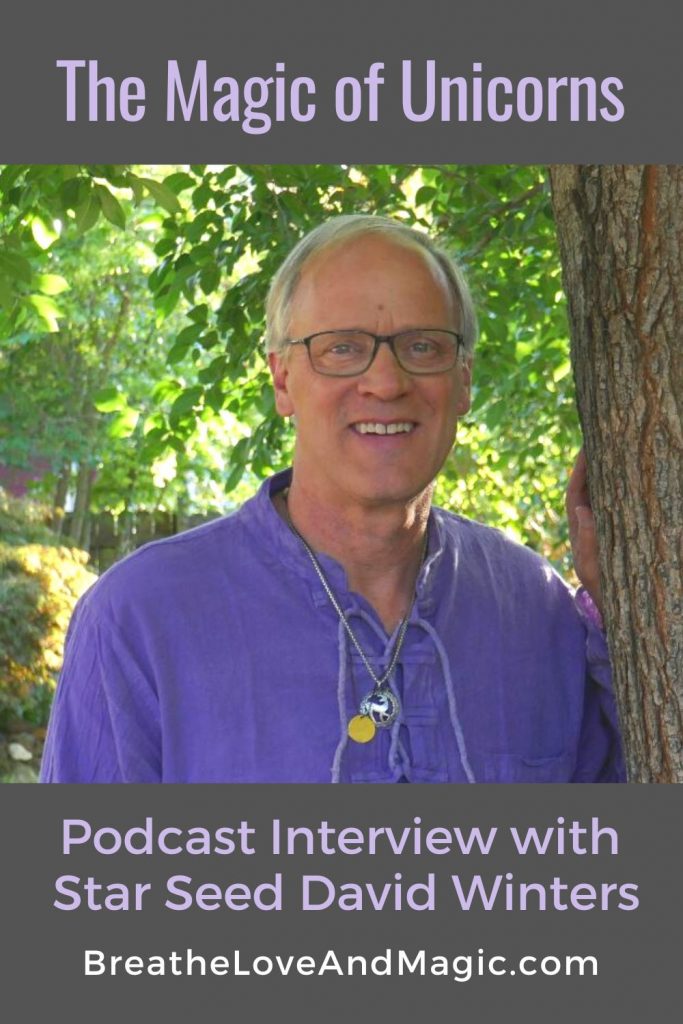 David started the interview explaining about his past life as a star seed. In 2010 he separated from his wife of 20 years and went to a Reiki healer and shaman did a soul retrieval with him reclaiming his traumatized and fragmented parts. The healer helped him recall a past life where he was hurling through space and headed towards earth. While this was puzzling, he felt a bit home sick, having left his home near the star, Sirius.

Past Life in Scotland 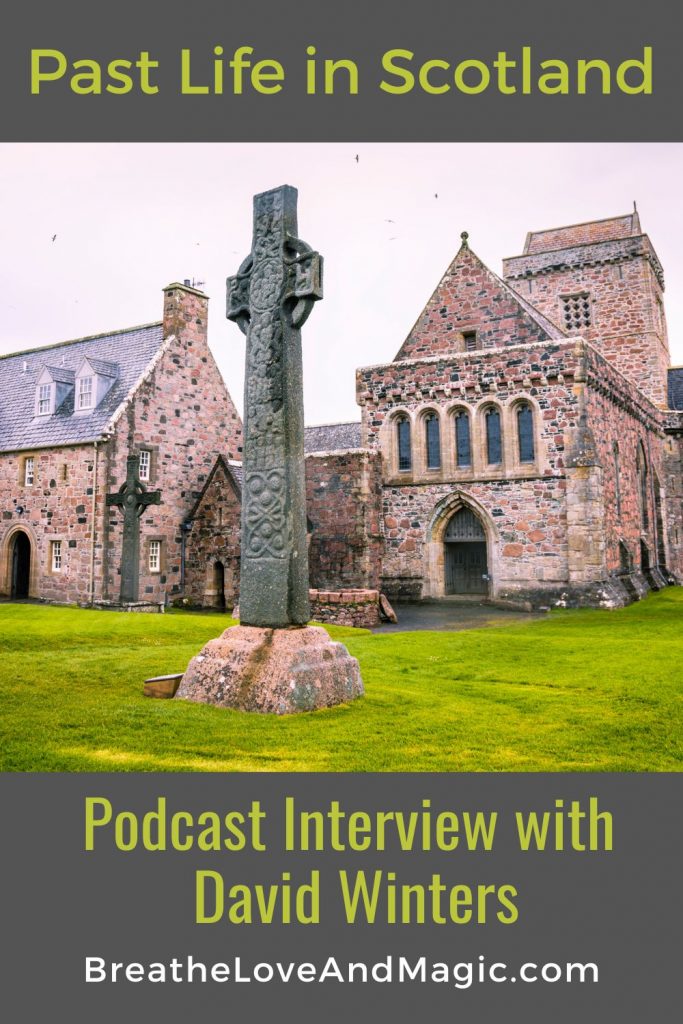 As he became more awake on his spiritual path, he realized there had been disruption on his planet, so he came to earth ending up in Scotland.

He learned a lot more through his intuition and hypnotherapy in 2018. David grew up in an ancient time on earth, cared for by giants who raised him in Scotland. He says the truth is we don’t understand all of earth’s history and the stories as it really was.

Recently, he returned to this site in Scotland, and did a healing ceremony in which he connected with his ancient self. Today, this is the work he does with clients.

In the fall of 2022, he went to the Isle of Iona where St. Columba built an abbey in the 6th century and David discovered a past life connection with this saint.

The two women with him on the trip also had past life memories of the island. They experienced deep healing from being traumatized in a nunnery there. People are drawn to take trips with him who feel a past life connection and resonance with the land. 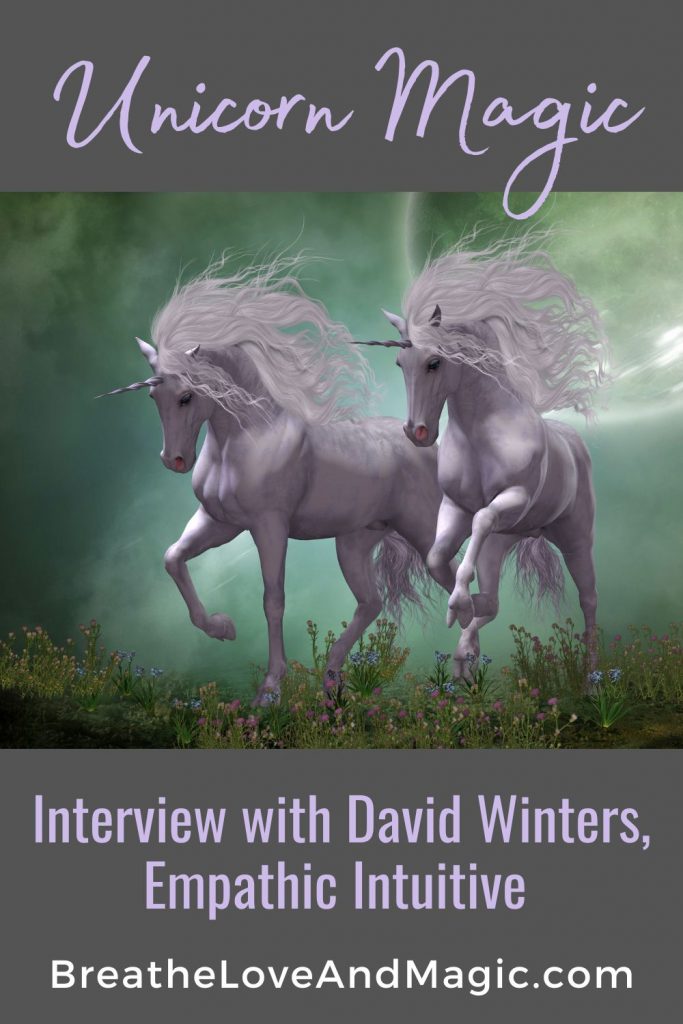 I asked David what was the most mind-blowing experience in visiting scared sites and reviewing his past lives. He said it was this recent trip to Iona for sure.

St. Columba was one of the big three religious leaders in the 500s to spread Christianity in Ireland. The other two are St. Brigid and St. Patrick.

Interestingly enough, when David thinks intuitively of this Saint, a unicorn comes to mind. Unicorn magic and unicorns are often considered nothing more than a child’s fantasy. Yet, this mythical creature appears in art throughout history. And for David, this magical creature is strongly connected with St. Columba.

Traveling to the Well of Eternal Youth, where St. Brigid is said to have visited, he felt she sent him a vision of a unicorn. This child-like, magical creature feels related to the youthful quality of the waters.

The next thing that happened was one of the women looked at him and said, “David, you are a unicorn.” Before he knew it, he met and connected with an entire herd of unicorns. Talk about unicorn magic!

David says the world is a magical, beautiful place. This message urged him to reclaim his childlike joy so he could experience magic and wonder.  Now he’s driven to share this message with the world to heal our planet.

I asked David what this childlike viewpoint has to offer humanity? When you see the world as joyful, it becomes precious and you’ll be more likely to take care of it.

This reminded me of Zen and beginner’s mind, to approach the world with wonder without a lot of expectations. You aren’t weighed down by negative experiences, anger, and trauma that life comes with.

When you approach the world with wonder, you see possibilities and connect with moments of joy. You can feel gratitude for the smallest things, which is where the real joy of life is found. This is unicorn magic! I’ve been getting this message myself for a year now, just from different spirit sources.

Unicorns Set Up the Positive Vibes 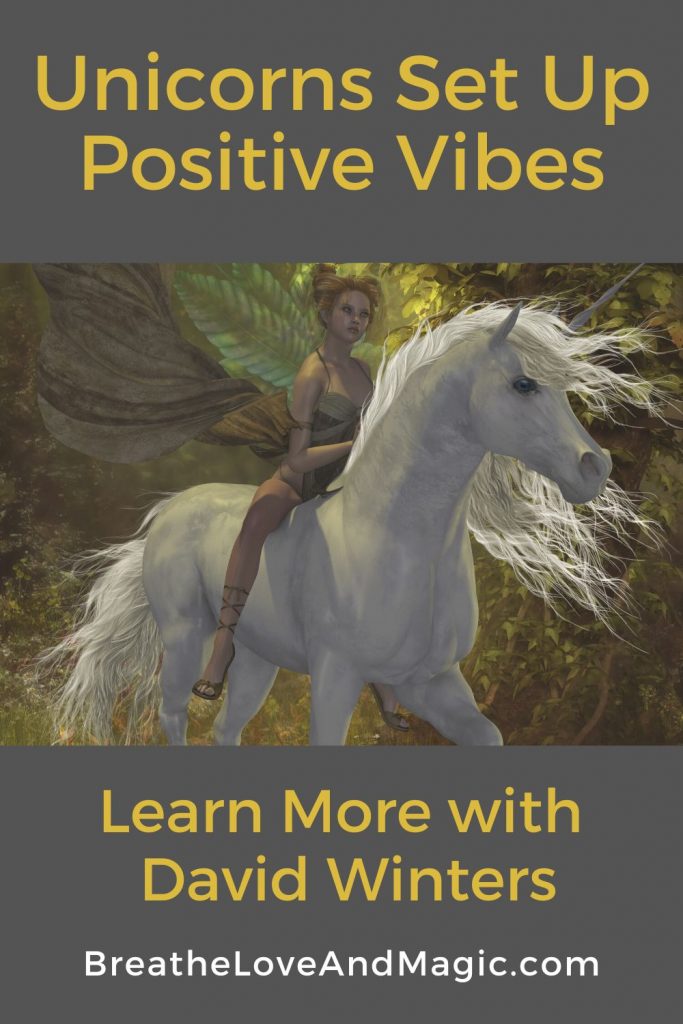 David believes our world is moving in this direction – to be more joyful and childlike, a fresh way of looking at life. This is where Unicorn magic comes into play.

They are skilled at setting up the energy before you reach a destination or event. For example, if he had to go visit his neighbors who have a contentious household, he’d send the unicorns first to set up better energetic conditions.

These spirit animals are big and come with high vibration and healing energy and that will shift the energy. David feels this is an example of childlike behavior and believing in unicorn magic.

Personally, I think this process is a masterful way to influence the energy. Magicians are known to send energy out in front of them, so when they get to a destination, everything is optimal for the work they need to do. I’ve heard this called “prepaving the way.”

I’ve done this myself for something simple like taking a road trip. I see myself leaving my garage, then driving down the road, having a great trip, then returning home safe and sound. That’s an example of sending the energy out in front of you.

David realized he had also done this prepaving on other trips to Ireland, where he’d start his tours at a well where St. Columba had once been. He would call upon St. Columba to send out good energy ahead for the trip that was just starting.

This is setting up the energy to be the most welcoming, positive frequency. You could do this in so many ways, even for business networking, especially if you feel nervous about meeting a room full of new people.

You could send the energy out in front of you to be welcoming and productive for you and for the highest good of all concerned. This is not manipulative at all because you are asking for he highest good for  everyone, by aligning the energies in a positive manner. 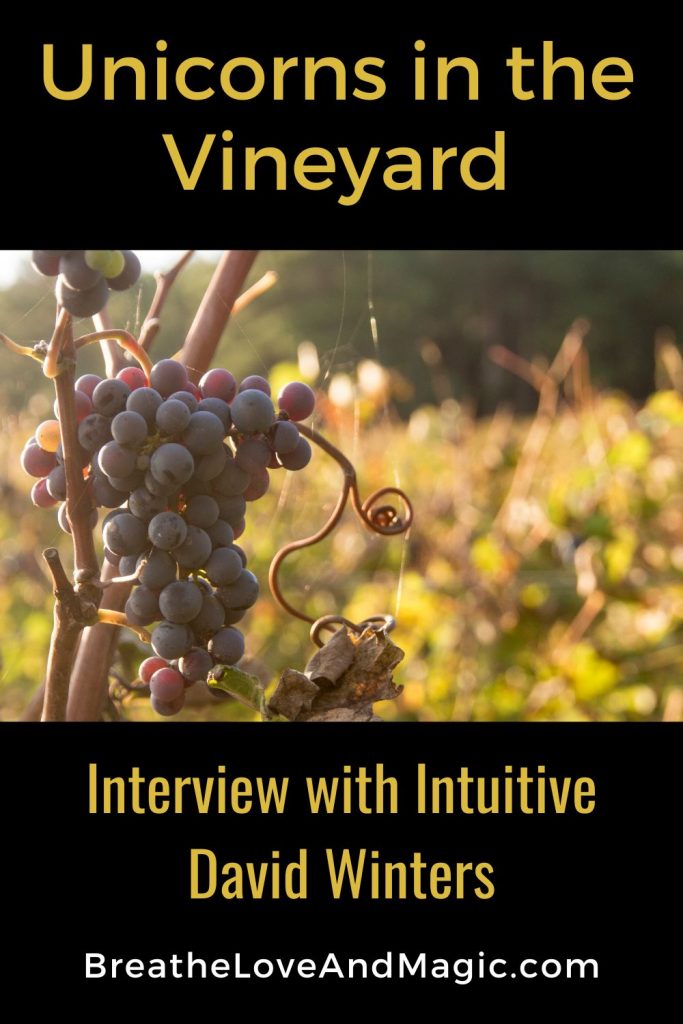 When he came back from Iona, he got a new url for his business, SpiritoftheUnicorn.com. David noticed there was a wine company with the same name, so he went to their site to learn about them.

Turns out, the company had their own experience with unicorn magic, as they had seen unicorns in the vineyards, setting up the energy for their success! How cool is that?

So, it seems this is the kind of unicorn magic popping up around the world now, and David suggests remembering you can call upon these magical beasts and send them out in front of you too, to set up good energy.

How can you not be happy when you think about unicorns? They are so beautiful and magical.

We went on to talk about where David lives in Mt. Shasta, which is a fascinating place with written mythology of Lemurians and also faeries who visited the Isle of Skye with him. Talk about magical!

Hear more about Faeries in this podcast episode.

Get David’s Free gift – Get his Free “Grove of Trees” protection meditation as an audio and pdf file, when you sign up for David’s newsletter on his home page.

Growing up as an empath, David was stigmatized for his sensitivity in an insensitive world. He studied microbiology for many years to learn what’s beneath the surface of life receiving a master’s and  Ph.D degrees.

Then he questioned his commitment to science and wondered if there was a truer path. He began waking up to the hidden world of life beyond the veil!

Developing his extraordinary clairvoyant gift, he explored many sacred sites and found his connection to the ancient people of Ireland and Scotland. The Bird Tribes, Tuatha de Danann and the Celtic Goddess and Saint Brigid.

Today, David bridges mystical sites in Europe and America with healing potential and liberation from false realities. His first book, “Where Heaven and Earth Meet: Stories of Healing, Magic and Remembrance” is due out in early 2023.