Home » Blog » Understanding Men » Why Is He Still On The Dating Website? 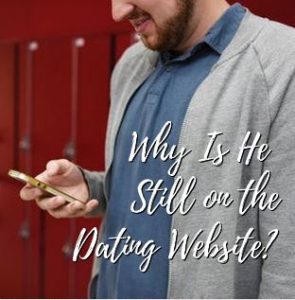 If He Likes Me, Why Is He Still Online Dating? Good Question.

Having trouble understanding men and wondering why is he still on the dating website? Here’s how I answered this reader’s question about how men think and why they do this.

Help With Understanding Men and Dating

You give great advice and I’m hoping you can help. I met online and have been dating him for about a month. Things were great and I really like him – he has everything that’s on my list.

He is on the dating site frequently – multiple times a day. Sometimes, he’d be online after our dates or even while I was on my way to our date. Why is he still on the dating website?

When we were together, he was very sweet and totally into me. He listened, paid attention and was very affectionate to me. This is a perfect example of why I have trouble understanding men – I couldn’t figure out why, if he likes me, is he still online dating?

I Flat Out Asked Him

He got defensive and gave excuses,  saying it was way too early for this conversation. He told me we should head our separate ways and I haven’t heard from him since. I apologized and told him I wasn’t trying to force him into a relationship, just wanting to know what was going on.

It’s hard to stop thinking about him and only three days have passed since we’ve spoken. Maybe I ruined everything and I don’t know what to do? Please – I need help understanding men. Some of your great dating advice for women would be so helpful right now.

Thanks so much,
Bummed in Brooklyn”

While it seems like asking why is he still on the dating website is a reasonable question, to him it felt like you were asking about exclusivity. A month is a bit early for that. I recommend not talking about exclusivity until you’re ready to sleep with a man – I’m not sure if you had already done that.

This is a tough one because according to experts like Patti Stanger, The Millionaire Matchmaker from Bravo TV, she says never sleep with a guy until you’re exclusive. But, not every woman wants to wait or follow that rule.

I get why you just wanted to understand. You think,.”If he likes me, why is he still on the dating sites?” It’s a reasonable question to pop into your mind. This behavior would make any woman curious.

The Secret to Understanding Men

Knowing that he’s constantly trolling for women tells you something about him. It tells you he’s into variety and checking out all his options. There’s nothing wrong with that. But it demonstrates he’s not thinking about settling down any time soon. Observing a man’s behavior is the secret to understanding men.

You can’t just look at what a man says or how he acts while he’s with you. You have to consider him as a total package. When his words and actions don’t match or  his behaviors don’t seem consistent, pay attention. That’s an important piece information about who he really is.

As a love and dating coach,  I can be more objective in understanding men because my heart is not invested. So I know he’s not ready for exclusivity. He doesn’t want to settle down or doesn’t want a girlfriend.

You wonder if you ruined things with this man by asking. Nope, not this guy. He was too quick to cut things off. Maybe with another man, asking about exclusivity too soon could scare him.  That’s why it’s best to wait – you may need 8-12 dates and up to 2 months.

Or you could bring this up before having sex, so you know for sure he’s not seeing others. When it comes to understanding men, they don’t want to be rushed about exclusivity. I’ve had clients tell me a man agreed to exclusivity just to could have sex once and then never called again.

Expect Men to Be Dating Others

Most men want to keep their options open until they are ready to focus on one woman. This is absolutely normal. Just expect that men are dating other women no matter how much fun they are having with you. Until they talk about exclusivity, assume they are not only dating you.

Honestly, I recommend women do the same, since you don’t know which man will want to get serious. Or who your best match will be – that takes time to figure out.

How to Bring Up Exclusivity

If you want to ask if he’s dating others, wait till before you sleep with a guy. You don’t have to ask him directly. That’s one thing about understanding men that can change how this type of serious conversation goes.

Instead, say how things are for you, “I don’t sleep with a man until we are in an exclusive relationship.”  This is not a question, but a statement of fact. Some men won’t like this and won’t go for it. That’s OK because you found out you two didn’t want the same thing.

Another way to bring up exclusivity is to say, “So many guys are still contacting me online and I don’t know what to do about that.” You’re not asking a question, just stating a fact. See how he reacts to this problem you  presented and keep quiet until he says something. This also helps with understanding men since now you won’t have to wonder why is he still on the dating website.

His Reaction Tells You Everything

It will be pretty obvious if he’s not into taking the next step toward taking down profiles and becoming exclusive, because he’ll look away , stammer, or be evasive.

The advantage of both of these methods is that you let the man come to his own decision without pressure or requiring a direct answer (which feels highly pressurized to a man.)

Why Did You Closely Monitor Him?

There’s another way to look at this situation. As a dating coach I wonder why you were checking on him so closely? Why were you watching his every move online?

When you just start dating a new man,  you don’t know if he’s “The One”. That takes  time. He may seem like a great guy, but you have to get to know him. And while doing that, you might as well date other men because you never know if a guy will ask you out again.

Since you are working on understanding men, dating more than one man at a time is a great way to hedge your bets. This way you get to know a few men to help you find a good match. Plenty of men won’t be right for you or ghost quickly – that’s a normal part of dating.

Focusing on one man from the first date is a surefire way to end up heart broken and then have to recover from each disappointment. That’s not fun!

The next time you date a new guy, don’t stalk him online. Stop worrying why is he still on the dating website. Instead, think about who else YOU might date. Then when you decide to narrow the field and focus on one guy who seems worthy, you can bring up exclusivity.

There’s No Shortage of Men

Dating multiple men allows you to meet enough guys to know you are making a smart choice. The last thing you want is to stick with the first guy who asked you out because you think there might not be anyone better. There is no shortage of men, so don’t short change yourself by settling too quickly.

1 thought on “Why Is He Still On The Dating Website?”