Understanding men isn’t always obvious, but it’s my mission as a dating coach for women to make it easier for you. This post is about how to let a man know what you want in a relationship. 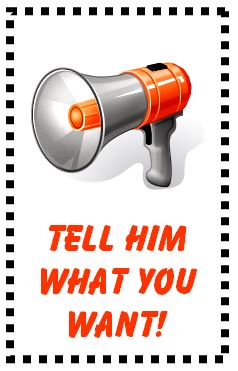 Want a Committed Relationship? Tell Him!

Are you dating men, hoping for an exclusive relationship that leads to a commitment? Maybe you want to marry or will be happy to enjoy a long-term committed relationship. So how do you communicate this?

Some experts suggest that as a woman, you should never bring this up. Nothing makes a man squirm as much as when you ask him how he feels about you. If you done this, you know EXACTLY  what I mean. A man will look around the room instead of at you. fidget in is seat, or change the subject among other things to avoid responding. He feels put on the spot and it makes him REALLY uncomfortable.

Yet, many women follow this pattern. You start dating a man. Things are going well. You are enjoying his company and the same seems to be true for him. Your feelings grow and you can see yourself with him for the long run. But he never says a word. So you start thinking you should say something.

See, this is not a great time to bring up the “Where is this relationship going” talk.. So you may be wondering, “Well Ronnie, when should I bring this up?”

You may balk about my dating advice, but here it is:

Bring it up when you first meet a man.

I know, I know you probably think this is crazy. So let’s think about this. When you talk about what you are looking for on the first or second date, he can’t possibly think you expect this of him immediately. You can easily say this without putting any pressure on him.

What’s great about letting him know what you ultimately want is that if he doesn’t want the same thing, he can opt out and move on. Men will do this because they rather not get started when they know they don’t want commitment or aren’t sure what they want. This is very smart for both of you. Now he isn’t likely to waste your time! Keep in mind that this is not a guarantee the man who continues to date you automatically wants a committed relationship. Knowing this means you are more clearly understanding men.

The Purpose of Dating

Remember the purpose of dating is to spend enough time with someone to understand their potential for the long run. That takes time and cannot be rushed. Either one of you may discover in three to six months that this isn’t a match made in heaven and want to move on. It happens all the time and it’s far better than sticking things out with the wrong partner.

When I was dating to find love, I was very clear on what I wanted. I was looking for a husband. On the very first date I actually said what I was looking for. I’d say something like, “In the long run, I’m looking to get married. I’m not saying with you, but I just want you to know what my goal is.”

Did I turn off a few men? I’m sure I did! That’s fine with me. If a man didn’t want anything to do with marriage and wanted to run, good! We didn’t waste each other’s time.

Sometimes I would ask my date if he was looking for marriage. That question helped me weed out a number of men. I watched their body language. Sometimes a man would look up or to the side. He might seem anxious or uncomfortable. It’s not really the best strategy but, I Learned a lot of my dating wisdom the hard way – by making mistakes. Understanding men came to me with exposure to a variety of guys in a short period of time.

Anything is better than shyly hoping and waiting quietly until you can’t take it any more and you decide to  have “The Talk”. Most men hate “The Talk”. When you let a man know what you want from the beginning, there are fewer surprises and he can’t say you never said anything.

However, if you have waited and now you want to know where things are going, you might as well find out. Given that you have been dating at least three months, you can ask your guy the question on  your mind. Here are two approaches:

1. Indirect Approach
If you haven’t discussed exclusivity, you can bring it up indirectly, but asking, “Men are still contacting me online. Do you think I should take down my profile?” Now you are asking for advice rather than starting by putting him on the spot. This will likely create an opening to move on and discuss exclusivity. If that doesn’t happen, you sort of have your answer even though it’s not direct. No answer IS AN ANSWER. So if he doesn’t ask you to be exclusive by bringing this up, he probably doesn’t want that.

2. Direct Approach
If you can’t take it anymore and feel like you just have to define the relationship and the path you are on, then go for it. Given that you see each other at least twice a week, have met his friends and some family, speak on a regular basis, then you are certainly going in the right direction.

However, if you don’t see each other consistently or have big gaps between dates because “he’s busy”, if you never know when you’ll hear from him, haven’t met his friends or any family, and three months have passed, that is not a good sign. In this case, asking might push him away but that will still serve you.

One thing I can promise you, asking a man where the relationship is going will not bring him closer if that’s not his intention anyway. In this situation, you are not going to “ruin” anything.

Ultimately, letting a guy know upfront can make your life easier. If you feel more comfortable, hold off to the second date. But it’s so easy when you first meet to say, “I want to find a lasting relationship. What do you want?” That helped a lot when it came to me understanding men.