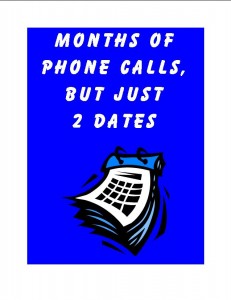 Need help understanding men? Some women mistake a phone or virtual relationship for the real thing. Learn the difference and how to interpret what a man says.

I am in a long distance relationship with a guy from back in May. We met through my aunt, we have the same hometown, but he moved away. We have great conversations and I can tell he is a great guy. He invited me to come to visit him 2 times in the past, but I refused him telling it was early. We met, for the first time in September.

He came home, but only stayed 2 days, so we only had 2 dates. The first date was OK. The second date was the greatest of my life and when we said goodbye, we hugged and he kissed me on the cheeks, because he was getting shy. I could tell from his body language that he liked me. He is back home and he still calls me and every time I call him, he calls me back. Everything is still the same as it was before, he sounds friendly, warm and calm on the phone.

It has been 3 weeks since we met, but still hasn’t said anything of inviting me there again to visit him (like he did before we met). He said nothing about not liking me. One night I hinted about our beautiful dates and about meeting again and he said something like – “We will see what we will do in the future” and sounded elusive and tired. His mind was preoccupied with the house work he had to do, because he lives alone and I know he didn’t lie, because I learned that from his father.

How can I interpret his words? Does he see us having a future together? He did pronounce the word “future.” Why hasn’t he invited me to visit him or set a date for a next meeting? He too agreed the dates were beautiful. I don’t think he has another woman, as he told me he was single for almost 5 years and lives alone.

I need your help understanding men – thank you.”
Allie

This might be hard to hear, but it’s important for you to know what’s going on – after all, that is why you asked for my dating advice right? So, please understand that I say these things with compassion.

You Are Not in a Relationship
I know this might seem strange to you, but you have not been in a relationship since May. You’ve had two dates and talked on the phone which means you are  sort of dating and sort of having a virtual relationship. “Dating” is the get-to-know-you phase including the first 4 – 8 dates with a man, before you get to exclusivity or the first phase of relationship.

A relationship is when you know you will be seeing someone on a regular basis. That does not describe your situation. This misconception confuses many women which is why I have come up with this relationship definition to help clarify.

Assumptions and Excuses About a Man’s Actions
When he didn’t kiss you on the lips, you made an assumption that he was shy, but still interested romantically. Given the lack of continued pursuit, I question your assumption. If he was interested in you romantically, he’d want to kiss you and see you. Since he has not asked to see you again, it’s safe to assume he’s not ready to date, doesn’t want a long-distance relationship, or perhaps isn’t that into you (I know, I’m sorry to say that).

You brought up meeting again and his response was “We’ll see”. Think back to being a kid. What did it mean when your mother said that to you? In my house it meant, “Not likely”.  “We’ll see” is anything but enthusiastic. He is telling you in a non-direct way that he’s not hot on seeing you again. You made an excuse about how he was tired and house work. Seriously? Housework?!? Don’t make excuses for a man’s behavior. It is what it is. He would act completely differently if he wanted to see you.

Interpreting a Man’s Words
Here’s the biggest clue and a lesson I certainly learned the hard way about understanding men. DO NOT INTERPRET A MAN’S WORDS. Take them at face value. His answer expressed a lack of interest in moving forward. He isn’t sure about any future – that’s how you should interpret his words – there is no interpretation.

Some Men Seek Emotional Support Through Virtual Relationships
So you are probably wondering, “Why the heck do we have all these phone conversations if he doesn’t like me or want to date me?” One answer could be that like many men, he might not be ready for a full relationship, but wants to lean on your feminine, nurturing ways to get the emotional support that’s not available from any other source.

More and more frequently I hear women complaining about being sucked into theses virtual relationships where they trade emotional support for the hope of a loving relationship. Why should he benefit from your nurturing ways without putting in the effort to have a relationship? He will take from you as long as you give and permit it. This idea is usually news to women who have trouble understanding men. My dating advice is to cut him off right now unless you don’t mind just being friends – that is a choice you can make.

You Don’t Have the Same Dating Agenda
I don’t see this situation resolving itself in any way that will make you happy. You want a loving relationship and he wants a phone buddy. Clearly, you two don’t have the same romantic agenda. If you want to be friends, you are already in a good spot. But if you want love from this man, wake up and move on because he will not be providing that option for you. I hope this helps you with understanding men.

The Good News
The last thing I want to say is that you can see this situation in a positive light. You managed to meet a man and have the best date of your life! That is huge and very exciting. While it was just two dates, he is your positive evidence that you are on the right track for finding love. If you permit yourself to let go and not suffer, but chalk it up to experience, you are free to meet the next guy who could be “the one”. He might not be, but every man you meet brings you one man closer to the love you want.

The fact that you found a guy you liked and had a great date proves that you can do that again, after all, he cannot be the only man out there. And since he’s not the right man for you or he’d be pursuing you, that must mean there are better men waiting to meet you.

So, put on some lipstick and your best dating outfit and go out to meet new men. And this time, look for a man who is relationship ready and into you!