Who better to help with understanding men then from a man himself? Find out how this male reader explains why he flirts with women but doesn’t ask them out. 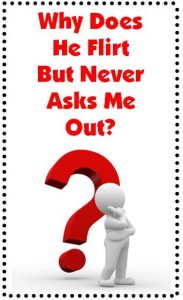 Men Flirt with You Because You Brighten Their Day

Thank you for writing the article about why men flirt with women and don’t ask them out.

I have read all the comments and for all three scenarios you laid out, the 1st one applies to my situation. But, I’m a guy, so I wanna chime in my opinion on this.

For readers, here are three reasons why a man might flirt, but not ask you out:

1. Oh yeah, he’s attracted to you.  However, he is actually involved with someone else. And, for whatever reason, he doesn’t want to mention that because he enjoys flirting with you. It makes him feel good .

2. He isn’t ready or looking for a relationship. But flirting with you gives him his “feminine fix”, and then he’s on his merry way. He benefits from flirting with you. It makes him feel alive and wanted. He loves the attention you give him.  Yet, he has no intention of ever taking this one step further and he’s probably not emotionally available.

3. He has something going on in his life keeping him from being active romantically. It could be financial trouble, health issues, emotional baggage, or other concerns. It doesn’t matter though because he’s not moving forward any time soon.

I’m a man in a relationship that is going well with occasional bumps along the way. For work, I’ve been in my office for 4 years. I saw a new comer to our building, not from the same department and became interested in who she actually is. Nothing more than that. After a few weeks, when I was walking to work, she was walking towards me while staring at me. I thought, “Oh it’s her.”

I smiled at her when I was passing by the next few days. One day during a coffee break, she came into the lunch room and we talked for a while. She introduced herself. Since then I knew I kind of developed some form of “Attraction”. We smiled when we bumped into each other and said, “Hi”.

Yes, we flirted a little, but not touching, just catching each other eyes. That’s it. We never talked more than the one-minute when she introduced herself to me. That’s it. I never went further than saying “Hi” and “Smiling”.

For the first few months, I guessed she was interested in me, dressing up, being available in my line of sight. I couldn’t help but look at her. Let’s be real, I found her beautiful. But, being in a relationship made me think twice of how I’m going to behave towards her.

If I’m being friendly, am I flirting? If I start making small talk, am I flirting? All those inner thoughts made me re-check what I’ve been doing. Once my “conscience” kicked in, I stopped looking at her. I tried to avoid seeing her in the same building. I never asked for her number or anything else.

After about 6 months, she also started avoiding me. Last week, she was laughing with coworkers. I was making a coffee and once she saw me, she stopped smiling and immediately changed her facial expression, which I gathered showed me she’s frustrated with the way things turned out.

I didn’t make a move because I’m in a relationship. Before you bash me for flirting, all I can say is “staring and flirting” are a two way street.

I don’t blame her if she feels frustrated. All I can say is that seeing her in my building brightens my days. That’s it. I can’t make a move beyond that. If I wanted to, I’ll be asking her numbers and before you know it, I’d be cheating, which I do not want to do.

I’m just laying out my scenario to let women know that not all guys mean anything by flirting except we enjoy seeing you.  I’m pointing out that flirting takes and gives you energy. I get an energy boost since she brightens my day, but sadly it also drains my energy when she thinks I’m just an another creepy guy.

Women who I know are in a relationship have flirted with me plenty. But society assumes that women are just friendly and nice, but men are wrong if they do it. That doesn’t seem right to me. So I wanted to share a man’s perspective.

Thanks for listening,
Rob”

Thanks so much for sharing your perspective. You have helped me reinforce the point I always make to my dating coaching clients. Flirting is fun and helps men approach you, but without further action like getting your number or going on dates, it has absolutely no meaning! This is particularly true when it goes on for months.

If a man is genuinely interested and doesn’t ask you out, IT’S NOT BECAUSE HE’S SHY. It has to do with one of the three reasons I listed above. So enjoy flirting by all means. It is enlivening for sure and lots of fun.

As I always say, flirting makes it easy for men to approach you. And, the single guys who are looking to date will ask you out. If they don’t ask you out, don’t take this personally. Maybe they just think you’re beautiful. That’s really not such a bad thing right?

I’m here to help with understanding men so if you are ready to discover what is really going on, give me a call to talk about dating coaching at 203-877-3777.