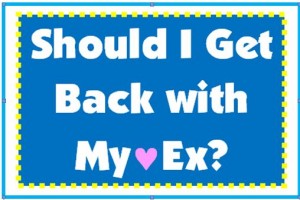 If you are wondering, “Should I get back with my ex?” this post will help you figure out your next step.

My question is should I get back with my ex? Here’s my story. About 8 months ago I started dating a guy that I knew through mutual friends. We at first got to know each other through texting. After a week we made plans and went to a movie. We continued texting and he would take me out on dates 2 to 3 times a week. We really had a good time together.

It started getting more serious and he introduced me to his friends and family. I attended parties with his friends and dinners with his parents. Things were going so well and I really started falling for him.

Then one day, through a mutual friend I found out he had been hanging out with his ex- girlfriend. I was very hurt by this and confronted him. He was honest about it and apologetic, saying how nothing happened between them and that he let his emotions get the best of him, whatever that means.

At that time I decided it was best thing for me to cut ties with him. If he was sneaky enough to pull that off without me having any idea, it was a red flag for me to jump ship. I was very upset about ending things with him because I did like him so much. I tried dating other guys for a while but no one else really interested me.

Two weeks ago he texted me out the blue. We have had no contact since we ended things so this came as a surprise to me. I texted him back and we have been texting back and forth since. He has not mentioned anything about what happened – it’s as if nothing bad even happened.

He is very sweet and tells me he wants to hang out and misses me.. That’s making me ask myself, “Should I get back with my ex?” However, its been two weeks of daily texting and small talk and he has yet to actually ask me out on a date. He’ll text me throughout the day telling me his plans and what he is up to.

Normally, I would take this as disinterest and move on. But, since we have history I might not be reading the signs right.  I really would love for this to work out and have been waiting for him to make a move.

Now I am growing impatient and wondering if he is trying to take things slow since we ended pretty badly last time. Or if he is just trying to keep me as a backup in case things don’t work out with another girl.

I would really appreciate some advice from you on this subject.

Thank you!
Backup in Bay Shore”

Your situation IS a little different since you do have history. When a man you don’t know texts, but doesn’t ask you out, then he’s not serious. That may be true about your ex too. It’s hard to know. You could be right – your ex might be taking things slowly because he fears you’ll reject him. He may be waiting for you to make the first move which wouldn’t be the smartest plan. Or you may be on to something about being his backup if he’s dating another.

You are wise to realize texting means nothing. Many of my clients mistake a man’s frequent texting for serious interest which is not the case. Some men simply enjoy a texting relationship because of the fantasy or ego boost but never move on to real dates.

Other men may see you once or twice, then revert to texting only, claiming they are busy at work. This is a way to keep a woman on the hook without having to do anything. Men who do this are either not emotionally unavailable or not seeking true love or a relationship.

Cut to the Chase and Ask Him

Waiting are not knowing are hard. Wondering if this is a sign and you should get back with your ex can be torture. Go ahead and ask him this one time if he wants to get together for a drink. Feel free to suggest a time and place to make it official. Then, see how he responds.

If he agrees to see you, he’ll say yes and schedule right away. But, beware of less direct responses, excuses or if he has to check his schedule. This is another indication that he lacks any serious intent.

Ask Him If He Is Seeing Anyone

While you are wondering, “Should I get back with my ex?” you might as well know if he’s seeing anyone right now.  Ask him directly, “Are you seeing anyone else?” This way you’ll know if he’s playing the field or genuinely interested in getting back together with you. Don’t avoid this topic since it is what broke you up in the  first place. If you worry this will put him off, that’s a good thing. If he back pedals, then again you know he’s not serious.

Why You Broke Up Has Not Changed

However, as a dating coach for women, I have a bigger question to ask you. The reason you broke up has not changed. He was seeing his ex behind your back. You felt strongly enough about this to leave him. What has changed to make him seem like a good option now? Do you have any concerns about his ability to be faithful?

Should I Get My Ex Back? How to Decide

Sometimes when you don’t connect with someone new, an ex starts to increase in appeal, especially when he is in contact again. Yet, rekindling your relationship is not always a good idea. If you are going to proceed, I recommend that you ask yourself these important questions:

If you think you could work things out with him, it might be worth a shot. Just be sure you are doing this for the right reasons.  For nearly 15 years I have seen dating coaching clients spending too much time on the big question, “Should I get my ex back?”

What ever caused the first breakup will cause the next one too and this can start one of those painful “on again off again” relationships that make people miserable.

Occasionally, you can get back together and work things out for the better. Only you know for sure what the right choice is for you. Just be sure to think things through first before taking this step.

My last piece of dating advice and help with understanding men is to take things slowly. Don’t jump back in feet first to get heartbroken again. There is no hurry. Hold off on intimacy until you see that he consistently spends time with you and is in contact regularly. That’s when you can feel more comfortable opening your heart to him.

If you want help spotting Mr. Wrong so you can find Mr. Right, get a copy of my bestselling book, Is he the One? on Amazon in Kindle or as audio