Need help understanding men who seem interested, but don’t ask you out?  Find out how I explained this confusing dating situation to one reader who wrote to me. 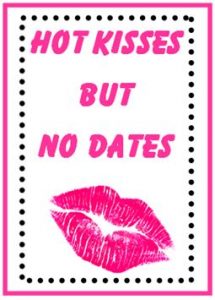 Hot Kisses But No Dates – I Need Help Understanding Men!

I am so confused! Recently I attended my 25th class reunion and ran into a man I hadn’t seen since back in the day. We didn’t date in high school, yet he told me the main reason he came to the event was to seek me out. After a few glasses of wine and a lot of catching up, we ended up kissing in a dark corner which was sort of high schoolish, but fun.

At one point before we parted, he mentioned he was concerned about dating me since I had only been divorced for eight months. I didn’t hear from him after and a month went by.  So I texted him suggesting we could just go out as friends and we did go out once. The evening closed with several hot goodnight kisses.

A month later he called me drunk and asked me to come over, but I said no. What makes this hard is I do see him a couple of times a week – he sells nutrition supplies and some stuff is fresh so needs to be picked up regularly.

Whenever I do see him, he is more than friendly, but never asks me out. I’ve read a number of your blog posts and while your answer to this is that he’s not interested, I’m finding it hard to understand that. He certainly seems interested when he’s kissing me. I don’t know what to make of this situation. I would really love your insight on what is going on.

Thanks,
Confused in Colorado”

I can see why you are confused by this man. I’ll do my best to help you with understanding men and this one in particular. Here’s how I see it.

There is a big difference between attraction and genuine interest. No doubt about it – he’s attracted. You know that from all the kissing. However, I don’t think he’s really worried about how long you’ve divorced. That’s probably a  convenient excuse.

If he wanted more, he’d ask you out and want to spend time with you. He’s not doing that. He sees you all the time, but doesn’t make a move. When he was drunk, he let his defenses down a bit or followed his urge to sleep with you, but wisely, you didn’t fall for that. So that’s it for him, he’s ready to move on. He’ll likely try this with other women until he finds one who will go for it.

This is a man who is not interested in dating anyone, but he is human and has needs.

I recommend finding a new vendor for your nutritional supplies, because if you keep seeing him, you will feel more confused or more longing and neither one will get you anywhere with him. Even though he said he sought you out at the reunion, which might be true, he doesn’t want a committed relationship or even casual dating.

When it comes to understanding men to find the right one and love, my dating advice for you is to walk away  and look for a man who is relationship ready and wants to spend time with you.