Understanding men is easier when you know what to look for.  Here are 5 warning bells that alert you to what a man is after. 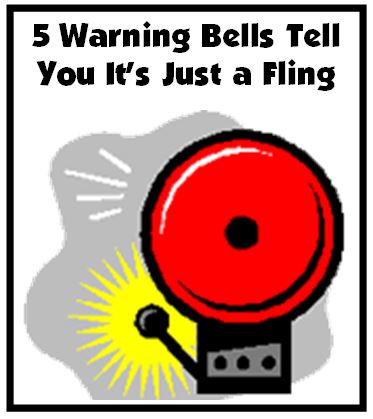 I met a guy online 3 months ago. Two weeks ago we spent a wonderful weekend together. He called it a whirlwind. We both have busy schedules, but he seems more distant now. I have backed off and am giving him space.

I had the time of my life with him and started to fall for him. He says he wants to get together again when our schedules permit but is extremely busy with work, tax time and finalizing his divorce. I know his stress is real, including headaches.

He said he wasn’t looking for a relationship but wouldn’t rule it out either. I think our weekend scared him. So I’m just giving him space hoping when he’s ready he’ll let me know. We haven’t spoken in a week and he has been up front about plans he has made and so on, myself as well.

We live 700 miles apart and I think that’s a problem for him, but I don’t care. I’ll go to him when and if he says the word. He has shared everything with me and I with him. I thought we were on the right path. He’s the one I want. Any advice?

First, I’m so sorry this has happened to you. I know this might be hard to hear but I figure you want the truth or you wouldn’t have asked. There are some very important telltale signs this man gave you that didn’t trigger your warning bells. After this you will be so much wiser if something like this happens again.

I’m going to spell it all out for you step by step so you will be smarter about understanding men.

5 Warning Bells to Watch for

1. He’s not divorced yet. This is something I say over and over again because women cannot hear this too often. Don’t date men who have not been divorced for at least one year. Divorce is a deeply emotional experience and everyone needs time to heal. While there probably are a few exceptions to this rule, IT WILL BE EXTREMELY RARE and YOU WILL NOT BE the EXCEPTION.

Women often think this doesn’t apply to them but it applies to everyone. If you want a fling, then it doesn’t matter. However, if you want a lasting relationship, stay away from men who are separated or divorced for under a year.

2. Believe Men When They Say “No Relationship”. Men are far more honest than women give them credit for. Sadly, most women hear the part they want to hear. He specifically told you he WASN’T LOOKING FOR A RELATIONSHIP. Then he softened this statement saying he wasn’t ruling it out.

See he doesn’t want to feel badly, so he can say he was honest with you. However, his agenda was to sleep with you and you might not go for it unless he left that door open a tiny bit. That’s called bait and you took it.

3. Men Like Romance Too. He might be lonely or miss being with a woman. Touching your hair, watching you smile, having deep conversation, kissing you and more. That closeness is enticing for a weekend. How exciting to fly to see you, treat you like a queen so you can adore him. What an ego boost! Now he knows for sure he’s still got game.

That doesn’t automatically mean he wants more.  He enjoyed himself as you did but don’t mistake a whirlwind weekend for him wanting to start a long distance relationship.

4. Busy is Bullsh-t. When a man wants to find the right woman and fall in love, wild horses couldn’t drag him away (thanks to the Rolling Stones). Yeah, he’s got a busy work schedule and so do you. It’s the perfect excuse to keep your expectations low as you accept his excuse to be unavailable.

As for yourself, you are ready to drop everything and go to him the minute he says the word. See, you’re busy and that wouldn’t stop you would it? Can you see how this is one-sided?

5. He’s Pulling Away. Again he may be busy, but his lower level of communication means he is dropping you. he is creating distance because he doesn’t want a relationship. He will disappear, slowly or perhaps more quickly than you would dream. So he’s NOT AFRAID – HE DOESN’T WANT WHAT YOU WANT – A RELATIONSHIP.

He’s not a bad guy, he just doesn’t want what you want. He had his own dating agenda which was to be with a woman, enjoy short term no strings romance, build his ego, have fun and a get a roll in the hay.

How to Qualify Men as Date-Worthy

In my next blog post, I’ll explain how to qualify a guy to determine if he is date-worthy so stay tuned!