Help with understanding men and their lies 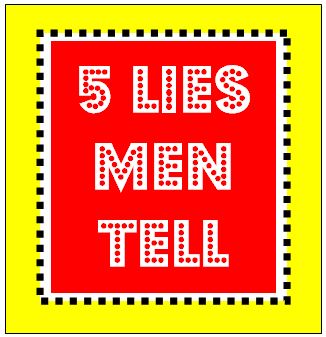 If you’ve dated, been in a relationship or married, chances are you’ve heard at least one of these lies. The truth is, they don’t all have bad intentions behind them. And let’s face it, women have a few lies of their own right? (One of my favorite female non-truths is,”I’ve had this for years, you just don’t remember.”) I’ll go through each one of these five fibs and give you the back story to help with understanding men.

1. Sorry I’ve been out of touch. I’ve got a lot going on right now.
Don’t believe this one. If a man is really into you, he’s not going to put you off. He’s not too busy. He doesn’t have too much stuff he’s dealing with. His ex wife, kids, or his job will not keep an interested man away. Where there’s a will, there sure as hell is a way for him to at least text or call. So don’t’ believe it when you hear this lie. Yes, sometimes people get busy, but chances are a man who uses this excuse is too busy to see you or stay in touch on a regular basis.

This lie is your tip off to move on to find a man who wants a relationship and wants it with you. If a man who saw you frequently suddenly becomes scarce and busy, that’s a sign of lost interest. Sometimes men disappear so the woman will break things off (and they don’t’ have to be the bad guy.) Even if it turns out to be true and he’s so important and busy he can’t see you or stay in touch, then he’s simply not the right man.

The right man for you wants to hear the sound of your voice and look deeply into your eyes. The right man finds the time and makes you and his love life a priority. If not, you’ll always play second fiddle to every life crisis. Don’t be fooled by his excuses. Let him go and move on to find the true love you seek.

2. Let’s talk about it later.
When he wants to talk about things later, know this is his way of ending the discussion. He can’t handle any more at this time. So he puts it off until later, hoping things have cooled down or maybe if he’s lucky you’ll forget.

After 14 years of marriage, I have learned that most of the time, giving each other a little space is a good idea. My husband can handle a serious discussion for a limited amount of time. Many women would prefer to hash things out until the end. But many men can’t handle that level of intensity. So if your man wants to finish the discussion later, know that you can bring it up again.

If this is a habit and the way your man deals with all confrontation that is something needing serious consideration. For a healthy relationship, you need to be able to talk through situations and find solutions that work for both parties. Relationships do require some compromise on both sides, but you cannot get there unless you discuss it. If you’re with a man who will never finish a discussion, it might be time to seek professional help or move on.

3. It never happened before.
Usually this little beauty pops up when other things don’t if you get my meaning. Performance issues can be very embarrassing for a man and bruise his ego. Of course there is always a first time, but usually a man is well aware of his “quirks” in the bedroom.

Today there are several ways around ED including medication. This is best discussed at another time rather than in the “heat” of the moment. Give him some space to regain composure and save face. Admitting your short comings Is not easy for anyone so have a bit of compassion, then discuss options.

4.  I don’t know that woman who keeps calling me.
This is pure malarkey. He knows exactly why that woman is calling. Otherwise how did she get his number? Don’t fall for this big fat lie. Let me give you an example. Kelly’s live-in boyfriend claimed he didn’t know why this woman from work would call him in the middle of the night. He was baffled as to why she sent postcards while on vacation.

Every time something would happen regarding this other woman, Mark assured Kelly that it was nothing to worry about. And Kelly trusted him and his excuses. But if something suspicious happens repeatedly, it’s time to investigate and uncover what is really going on. That’s what Kelly wished she had done. Turns out Mark took off for greener pastures with the other woman as soon as Kelly graduated from her masters’ program.

There is no reason for your man to receive continuous communication from a woman you do not know unless there’s something going on. Even if it’s an ex he hasn’t told you about, he needs to come clean or you need to move on to find a more trustworthy man.

5. I want to marry you, I just need more time
Let’s say you’ve dated this guy for two years or more. You are tired of waiting for him to pop the question, so you ask where things are going and if you are going to get married. If after two years (or more) your man says he still needs more time, that is your sign that he doesn’t want what you want.

You may decide to hang in there. And everyone has heard a story or two about people who got married after 10 years or more. But do you really want to wait that long? I’m not saying that everyone needs to get married. But if you WANT to get married, and your man needs more time, ask him how much time? Get him to pick a specific time frame. If he can’t narrow it down and isn’t sure, I recommend you think about moving on.

Now, if you don’t mind not getting married or having that kind of legal commitment, no problem. Plenty of couples are in long-term, monogamous relationship for years without living together or getting married and are perfectly happy. The choice is yours. I’m just saying be true to yourself and what you want so you do not compromise your life goals. Especially if one is getting married.

If your man will not give you a time frame, he is saying something without saying it. So don’t believe his lie that he needs more time. Kick him to the curb and find a man who wants the same thing you want because that is exactly what you deserve.