Wish you had a better understanding of men? This reader wants to know why her guy disappeared after several great dates. Read on to find out what my explanation is. 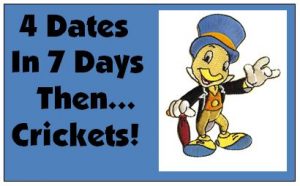 Understanding Men – Why Men Pull Away

A week ago I met a man from online and had a great first date. We met the next night for a concert and had another fun great night. Two days later, we went to the same event and he made a point of seeking me out and spending the evening with me. Two days later, we saw each other again and had the best time yet!

Together we have lots of laughs, lots in common, lots of chemistry. That’s four dates in just seven days. Each time he told me how great he thought we were doing. How comfortable he was and how much he looked forward to more. I agreed. We talked about things that were happening in the future in a way that seemed as if we might go together.

On Monday, the day after our fourth date, I emailed him telling him I truly enjoyed my time with him and looked forward to more. I also made a joke about something we had found funny earlier. He responded back a couple hours later saying he felt the same way, the day was a blast and he looked forward to more. And then I responded back the next morning, telling him to enjoy his day kayaking and again that I had a great time.

Today is Wednesday and I have crickets from him since Monday night. I am trying to not over think this, but I am confused about why not a word. I know it is only two days. It all just seemed like it was moving along nicely, and now I don’t have a clue. I am not going to contact him. I am going to wait on him. But, am I missing something?

Thanks for your help!
Baffled in Buffalo”

Understanding men is one of the toughest parts of dating over 40 (or at any age really). It doesn’t make any sense that you could both be having such a great time and then he decides, for no apparent reason, to just STOP.

I’ve been in your shoes. When I was dating I had 4 amazing dates in 10 days. But once I slept with him, I never saw him again. I called to talk it over but he said he couldn’t talk and said he’d call me back. But, he wrote a letter instead. And what a letter it was!

He told me he was seeing other women and had decided on another. Trouble is, I didn’t know he was seeing other women. He never told me. This might have just been his excuse to dump me or he could have been dating others. This was a hard lesson. Just because a man shows lots of interest, doesn’t mean he has long-term plans. We had talked about the future as well and made casual plans to do things over the next few months.

So this is my take on your situation given my own dating experience, 13 years of dating coaching, and talking to lots of single midlife men:

Unfortunately, this is a place where you can’t use logic. Too often, dating doesn’t make sense because you don’t know what a man is actually thinking. So, you are missing important pieces of the puzzle for logic to work. Instead of logic, you need to rely on your skills of observation, patience and something I call Positive Neutrality.

Observe His Behavior
Watch what he does rather than listen to what he says. While it’s true he connected with you a lot in seven  days, then he took a breather. He may have contacted you by now or maybe not. Either way, seven days is not enough time to observe a man’s actions. To understand a man’s true intention takes time as you watch for consistency.

Slow Things Down – This is one reason I recommend not seeing a man frequently in a condensed time frame. How could you not think he really liked you? Any woman would jump to this conclusion. It’s much better for you to see him once or twice a week at first so you don’t get a false sense of knowing him or overly wrapped up, and he gets time to wonder what you are doing and who else you might be seeing.

As a woman, it’s your job to set the pace and apply the brakes which is very smart dating strategy. No matter how much fun it is to cram a bunch of dates into a week or 10 days, the budding romance often burns out just as fast.

Patience is a Dating Virtue
When a man comes on fast, you get used to that pace. When he goes back to normal (whatever that is) you feel crushed. The truth is, men have a different sense of timing. For some guys, it won’t seem too long to wait a week between dates or contact. Learning patience is a must or you’ll drive yourself mad wondering when he’ll call next.

When I met my husband, I was dating another guy, but we only had three dates. I dated both my husband and the other man for about 5 weeks while trying to figure out what to do. This dating strategy served me well. Jim was more available, and Paul was a slow simmer, only wanting to see me once a week.

If I hadn’t been seeing Jim, I would have been too impatient with Paul. But, I was busy dating another man. I learned how important it is not to put all your eggs in one basket, and I wasn’t overly available for either guy.

Positive Neutrality
There’s no way of knowing if a man is serious or just enjoying the ride, which is why I recommend “Positive Neutrality” It’s fine to feel happy about a new guy, but remain somewhat neutral as you take time to observe his behavior. Say to yourself, “This is fun, but I have to wait and see if it continues.” A man might surprise you and keep up the pace…or not.

When you stay balanced and remain positively neutral, you’ll still be disappointed if the guy disappears. But you won’t be as crushed because you won’t be as attached. Neutrality keeps you from over thinking – something all women tend to do with a new beau. It’s only natural – which is why you have to trick yourself into remaining neutral. This works amazingly well for my clients and it worked for me too.

Don’t Call That Man!
Last but not least, your instincts to now call him are EXCELLENT! Good for you for knowing this key dating strategy. He knows how to get in touch and you didn’t do anything wrong. Maybe he’s taking a breather. Maybe he’s rethinking being in a relationship. Maybe he doesn’t know what he wants, or a million other things could be behind his withdrawal.

Why men disappear has driven women crazy for decades since we became liberated. It’s one of the most difficult aspects of dating in modern times. To find love, you need to develop a thick skin because chances are, this could happen again, especially if you don’t put the brakes on next time. Put this dating advice to work and you will survive and thrive. And if you keep going, you will learn about understanding men and find the right one for you.

2 thoughts on “Understanding Men: 4 Dates in 7 Days, Then Crickets!”