Flirting vs. true attraction – How can you tell the difference and know if he really likes you or is just having fun with you? 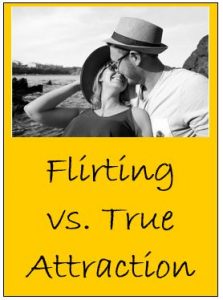 You’re out for a night of man hunting, looking for that quality man who will fulfill your dreams of love.  After an hour chatting and laughing with your girlfriend, you catch this man’s eye across the restaurant’s bar.  He shoots you a big smile. You wonder is this flirting vs. true attraction?

You smile back, then gracefully turn away. A few minutes later, you sneak a peek and catch his eye again. He laughs and holds his drink up in the air like he’s toasting to you. He’s so handsome, you get a little chill that runs down your back.

Next thing you know he’s walking towards you. That makes you a little nervous, but a little excited too. He approaches, says hi and then you two engage in what turns out to be a fun conversation. Yeah! He makes you laugh and he’s got that twinkle in his eye you always find so attractive.

Things continue to go well and he asks for your number. Wahoo! It’s been a while and this feels so good. Then the texting begins. Good morning sunshine. Sweet dreams sweetheart. Maybe some conversation during the day too. He has a great sense of humor and you look forward to these little texting exchanges.

You See Him Again

The following weekend you go out again with your girlfriend to the same place. Lo and behold – there he is again with his friends. He comes on over and sticks by your side all night. Awesome! He says he’ll call you and the two of you will go out next week.

Yet, he continues to text. What is this? He seems so attracted and into you. It’s like he’s magnetically pulled to you when he sees you. But, nothing further happens. What is this about?

This is a perfect example of the difference between flirting vs. true attraction.

See, he finds you attractive alright. And he sure does flirt with you. And the two of you have a blast engaging like this. Too bad he doesn’t take that next step and it’s completely maddening!

Making Excuses For Him

That’s when you get into your head and start making excuses for him like:

Yes, women tend to make up reasons why a man who seemed so interested didn’t ask you out. In the absence of real information, we’re happy to make stuff up. Our reasons sound realistic and possible. Yet, we haven’t tapped the truth or gotten even close.

The truth is – he’s just flirting! And flirting is marvelous, playful fun.

How Do I Know He’s Just Flirting?

That’s EASY. Because he never followed through. When he saw you, he was happy to come close and flirt his butt off. He’s willing to text back and forth daily or disappear and come back to text some more. Either way, he’s NOT serious.

A man who is seriously interested and has true attraction WANTS to spend time with you. He wants to get to know you. That doesn’t happen via text. No way. Texting might be fun, but it’s a lazy way to communicate and is not the sign of a man who wants to date you. An interested man might text as a supplement to calls and dates, but it will never replace either one.

A man who flirts enjoys women. He might not want a relationship or he might already have one. That doesn’t prevent him from flirting because to him, it’s just fun. It DOESN’T MEAN ANYTHING. So, if he’s in a relationship, he doesn’t even feel guilty.

What Is Flirting For Guys?

I met a man like this once when I went dancing at a high-end bar with a girlfriend. He was an AMAZING man. Handsome, sweet and such a fun flirt. We had great banter and conversation. He took me out to see his expensive, fancy car. (Am I an idiot? Well, I learned a lot of things the hard way before I found my husband and became a love and dating coach.)

Nothing happened besides him bragging about his car and we went back inside. He was clearly trying to impress me. But, to what end? What was his game? I’ll tell you. When he went off to the men’s room, his friend called me over to the bar and told me, “He’s married. He’s just flirting with you and having fun. Seriously, I’m telling you the truth.”

Whoa. I was completely stunned and felt frozen in place. Having gotten all excited about this man as a real possibility, I got far ahead of myself in my mind.  Ever been guilty of premature future thinking like this? It’s a great way to actually break your own heart.

A man who has serious intent won’t flirt and disappear. He’ll want your number and he’ll call you in a few days. Then he’ll ask you out, so he can spend more time with you. He’s curious about you and wants to get to know you. He asks questions about you which demonstrates true interest.

The difference between flirting vs. true attraction is actually tremendous. When a man is genuinely interested he not only tries to impress you to win you over, but he tries to please you and make you smile. Your happiness matters. He wants to be in your company because he feels good when he’s with you. He consistently asks you out week after week and calls more often too.

A man who flirts can be a lot of fun. And there are flirty men who do want a real relationship. But you have to watch the men you date to see what they DO. His actions to see you and his ability to follow through demonstrate his interest level. This is how you KNOW he’s really into you.

These are all signs of a man who is flirting without intent. Don’t get taken in by his shenanigans. He might be fun, have a twinkle in his eye, flirt like the dickens, and act like he’s totally into you. But, if he doesn’t call to talk or ask you out at least once a week if not more, he’s just not serious.

Which means he’s not the right man for you if you are seeking lasting love with “The One.”

Men Do Not Suddenly Change

When weeks go by and the same thing happens over and over, he’s showing you exactly who he is. Another flirty man who doesn’t want a relationship. Which in turn means he doesn’t have the same agenda as you do –  a committed, loving relationship.

Let him go. Don’t settle for flaky and flirty when you can have the real thing. And, don’t give up. Break free and keep looking until you find the love you dream of. He’s out there and looking for you right now.

Want to know how to understand men, know when a man is wasting your time, and eliminate limiting beliefs that keep you single? Let’s talk! Schedule a complimentary session by phone or Skype outside the USA, to discover what coaching can do for you.

5 thoughts on “Understand The Difference Between Flirting Vs. True Attraction”