My guest, John David Latta, author of The Synchronicity of Love, talks about balancing his energy on this episode of the Breathe Love & Magic podcast. 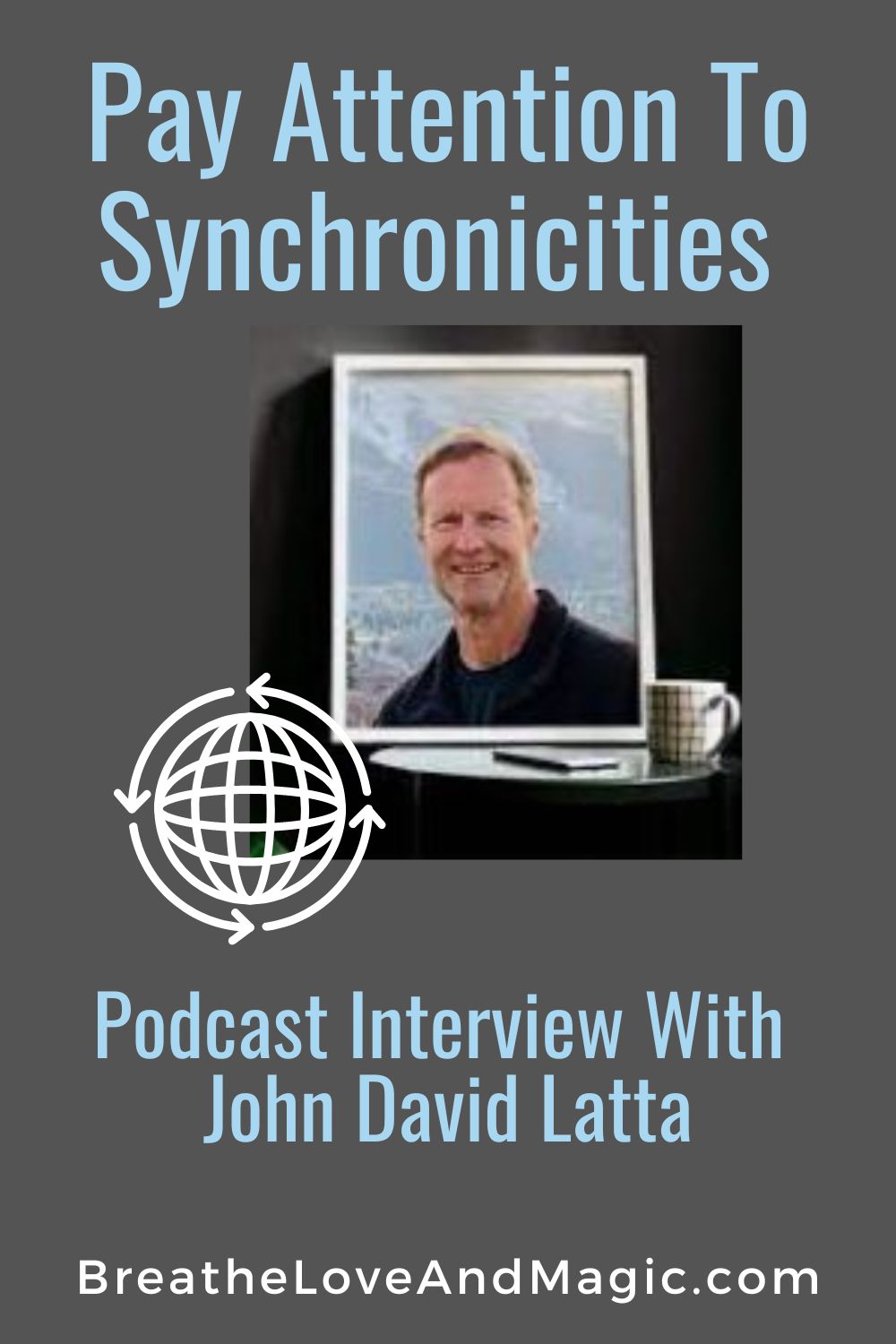 I’m a HUGE fan of synchronicity and think it’s one of the most magical things that can happen. When things start coming together or you see something time after time, that’s your signal or message to pay attention.

For John, when his life fell apart and he hit rock bottom, he discovered this truth which he writes about in Synchronicity of Love. It all began when he signed up for his first spiritual retreat.

Before this, he had been devoutly anti-spiritual and uninterested. He chose a retreat leader that the author, Michael Crichton, wrote about in his book, Travels.

Sitting on the plane on his way to the retreat in Southern California, he was seated next to a woman also reading a Michael Crichton book. It turned out they were the only two people on the plane going to the same retreat! What are the chances?

This was the beginning of a slew of crazy synchronicities that have represented signs and guidance over 20 years. John says its like your life is being orchestrated at a higher level with the magic of synchronicities happening over and over again.

For more on Synchronicities, check out this episode too!

The Synchronicity of Love

Latta’s book has 119 short stories about synchronicities and manifesting. He has come to a new understanding about manifesting,. His new thinking is that people aren’t actually manifesting as much as putting themselves into alignment with what’s meant to happen.

This is like getting into the flow, which is lining up with your highest good – the soul, divine being or divinity. When you put yourself in alignment with that, everything starts to fall into place. Coincidences become common place. 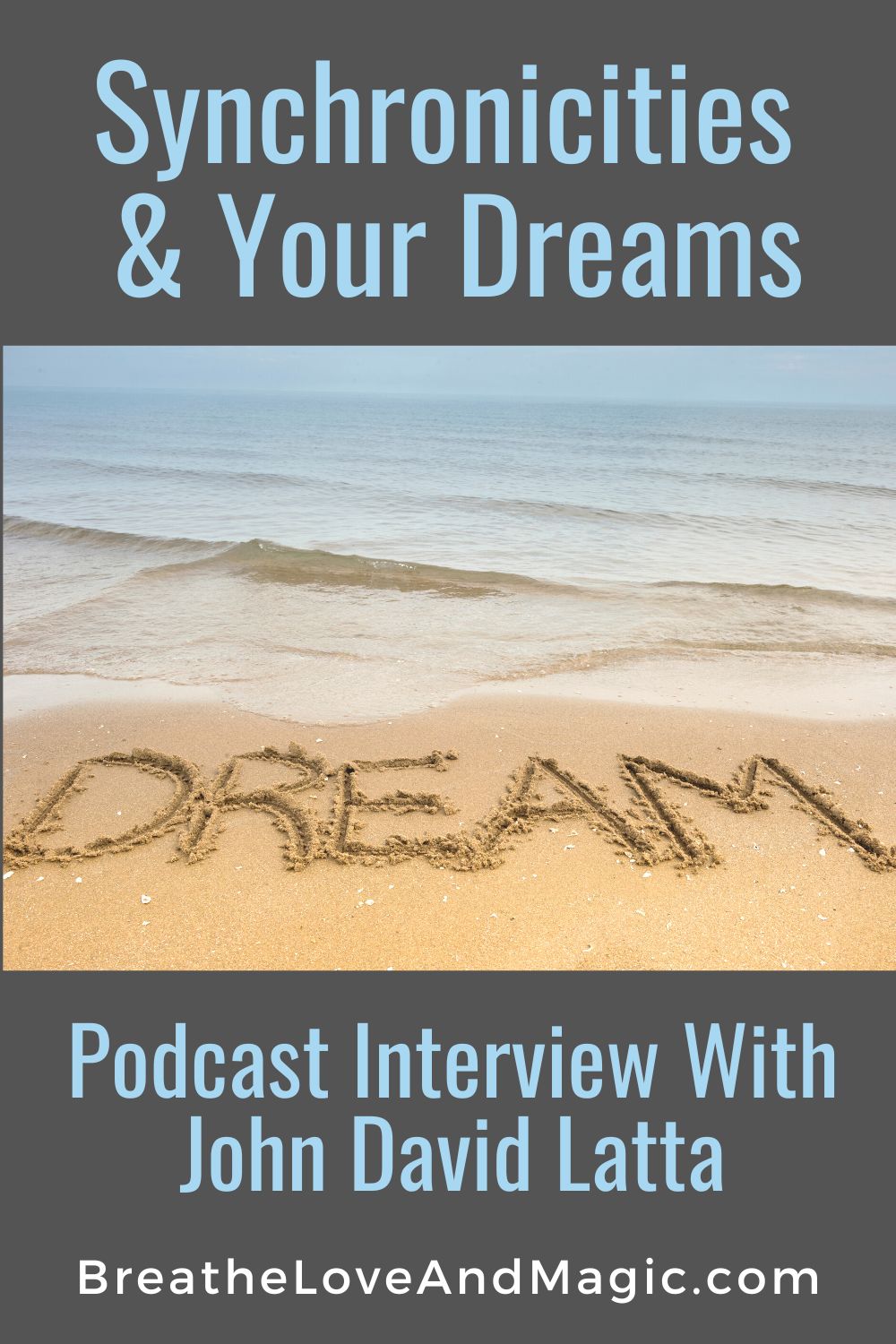 What did John find in his life that was most effective to create more alignment? He relied on dreamwork. According to Carl Jung, “Until you make the unconscious conscious it will direct your life and you will call it fate.”

Dreams speak to us in symbols and metaphors, so they are not always easily understood. But they provide insight into the subconscious mind and what’s really going on inside. When you notice patterns in your dreams, that’s how to unravel what’s going on within.

The more you pay attention to your dreams, the better you can break into other realms of your being. John mentioned how Judith Orloff breaks it into two big categories: 1) psychic dreams which feel like guidance and 2) psychological dreams.

If you take the time to ponder your dreams and unravel the messages, you can learn a lot about yourself or get messages from your subconscious or your guides, etc.

For John, the synchronicity of love is about spending time in heart-centered meditation. He noticed that the things that often triggered him, lead to something inside himself that was similar. He called it, “If you spot it, you’ve got it.” So, the meditations focused on the heart helped to smooth things over.

He went on a sacred sites tour of England with a sunrise ceremony at Stonehenge, etc. He met wonderful people from all over the world, but he hated the tour guide who was blustery and didn’t fit his image of a spiritual guide.

Noticing this, he thought maybe he could change it. So, he used his own version of Ho’oponopono (the ancient Hawaiian method for forgiveness) while thinking about this woman. He tried to see himself having similar qualities as her to melt away his dislike.

It worked incredibly well and the next day there was a dramatic transformation. He liked her, thought she was funny and suddenly got along famously with her. This was amazingly synchronistic and powerful, as he opened his heart to someone he didn’t like.

His Shift Impacted Everyone

My comment on this story was how his own shift towards the guide most likely impacted everyone on the trip. John agreed, saying he wrote about this in one of his favorite chapters of the book.

He was the only man on the trip, and at one point, everyone was meditating in a crop circle. John couldn’t settle down, so he stood and walked around everyone like a moving meditation until everyone else was done.

Afterwards, a few women pulled him aside and thanked him for circling the group because they felt so much safer with her eyes closed knowing he was watching over them!

Towards the end of the trip, he thanked the guide for all her efforts in creating their amazing trip. She teared up and responded that he had no idea how much that mean to her. John was truly amazed to experience this turn around since at the start he could not stand the woman.

I loved this story because this kind of shift is truly life changing. I told a story about how this same kind of thing played out in my life at the beginning of my career and you can listen to that story in the podcast.

When you are living on a spiritual path and you make this kind of shift in perspective, it often boils down to your intention. Latta says he thinks we create limitations for ourselves, so we have the opportunity to wake up and shift our intention. 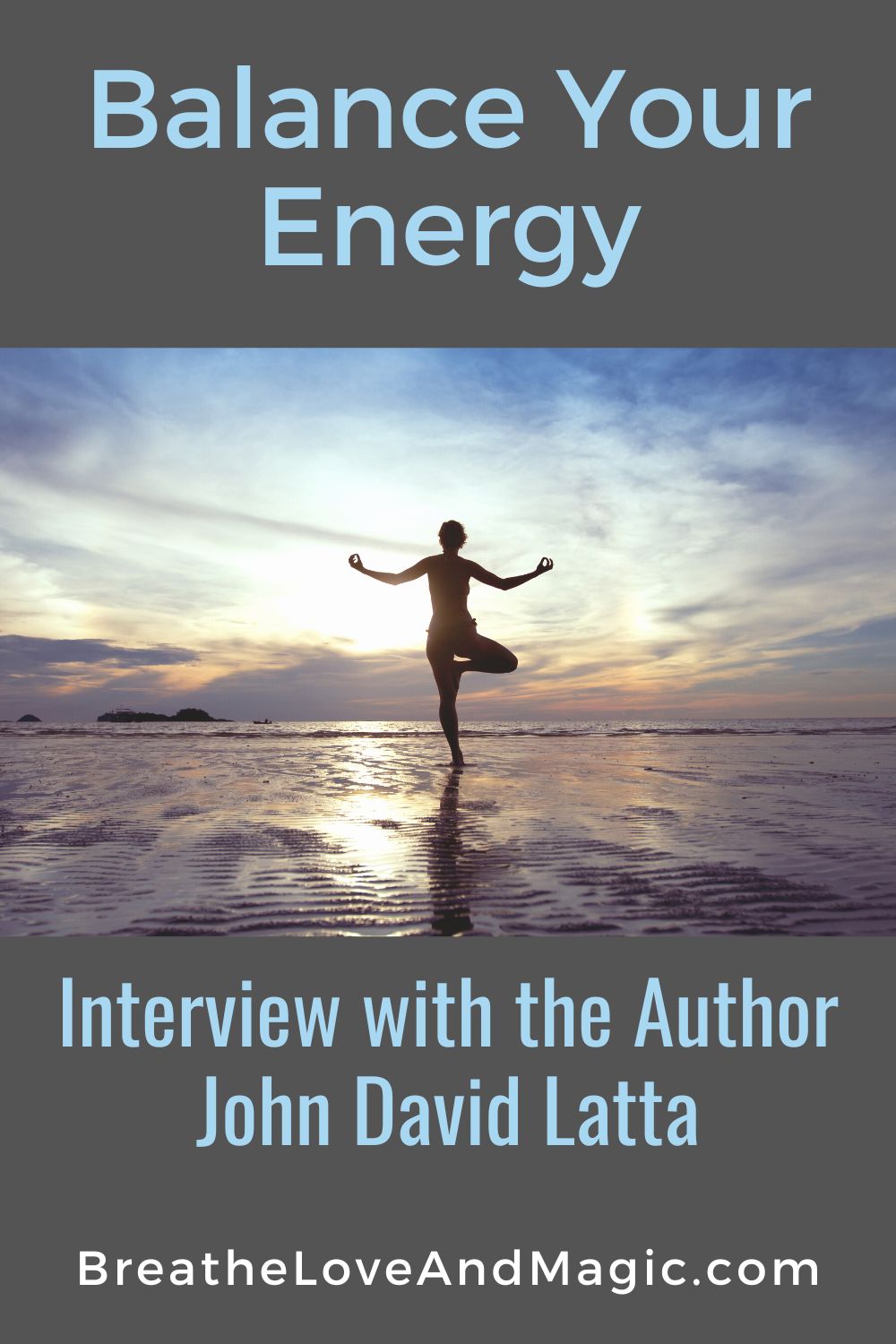 Prior to his life falling apart, he was CEO of a food company and spent most of his time using his masculine side. John said he bossed people around, was busy doing, taking action, being competitive, argumentative, talking and judging.

Then his life fell apart and he went to therapy for the first time, ending up in a group as the only man. I commended him for being brave enough to sit in a group with all women and share his feels – whoa!

He had a really funny dream about peeling shrimp that he recognized as being uncomfortable with revealing himself in the group. You can hear how that all unfolded when you listen to the podcast.

Often the women in the group would say to John, “You’re so good at doing, try being.” So, one night when he was putting his son to bed, he thought instead of hurrying the process he would simply site and listen to him. His heart swelled with love like never before at that intensity and he felt so grateful.

John’s book is a great read, with 119 spiritual, inspirational, and heart-centered stories. Get your copy here on Amazon or Barnes and Noble 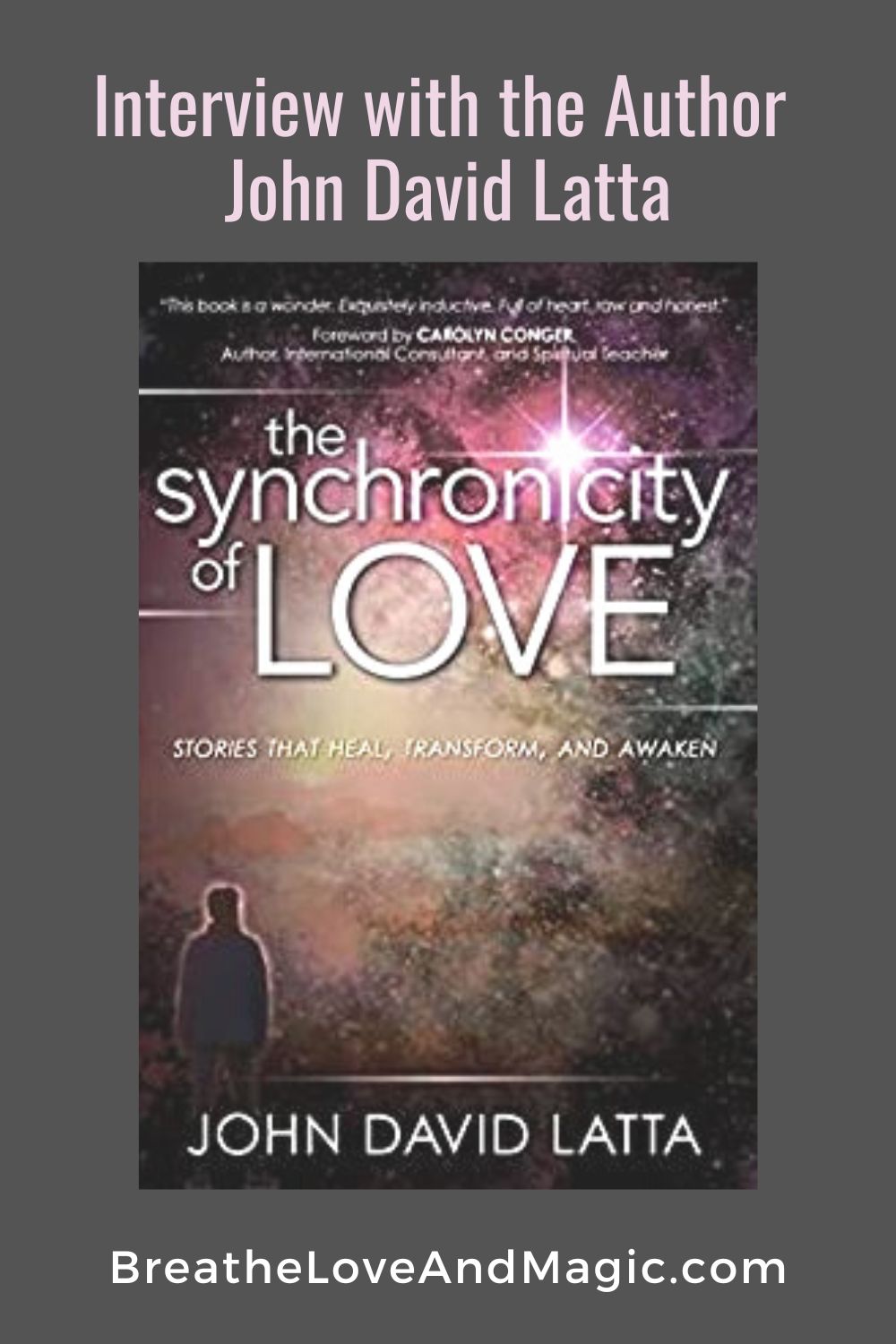 Terrified by an oppressive fear of death, John David Latta was a single dad with two children facing rock bottom, loneliness, and bankruptcy. Hard work, arguments, and logic were getting him nowhere, the competition was tough, and he was in over his head.

In his book, The Synchronicity of Love, John shares his extraordinary stories of what happened at work bottom, when he threw himself into Unconditional Love with sincerity and earnestness.

His stories about his journey inspire, uplift, heal, shock, awaken, and transform. They contain the seeds of potential to change habits and one’s deepest assumptions about what is possible and have the power to radically transform anyone’s life.

Today, John is a mystic, author, teacher, and former founder and CEO of a multi-million-dollar consumer products company. He lives with his wife Wendy, in Redmond, WAS. Visit him at www.JohnDavidLatta.com