The Fairy Realm and Ladies of the Lake come together to help humanity move into the New Earth. Bernadette Wulf reveals the true role of faeries in the Arthurian legend during this mystical interview.

(Note: I’m going to be using “faeries” and “fairies” interchangeably throughout this post, so more people can find this episode when searching online.) 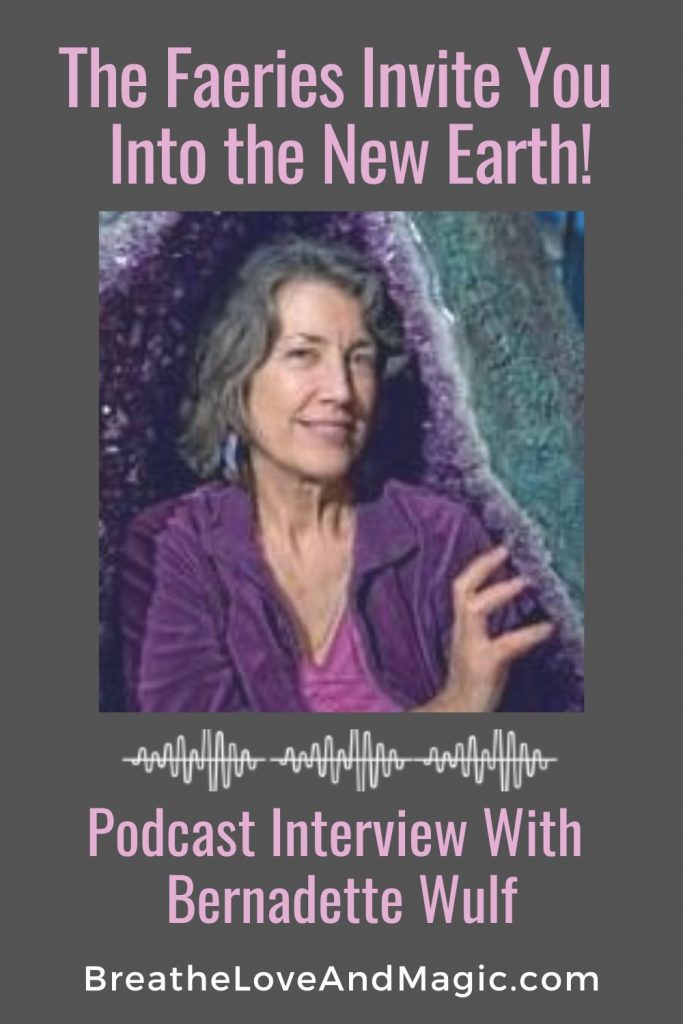 Bernadette has always been interested in the fairy realm since she was a child. She didn’t play with the fairies as a kid, but always drawn to the fairy tales and knew there was something more to life than what she was being told.

Bernadette mentioned several teachers John and Caitlin Matthews and RJ Stewart, Tom Cowan mostly connected to Celtic magical teachings and lore. These teachers provide guided journeys versus just drumming in the Native America tradition, and this helped her connect with the faeries in a strong way.

The Sidhe and Tuatha de Da’an

Today, she communicates with the Sidhe, (the Irish term for faeries who are descendants of the Tuatha de Da’an, a race God-like beings), plant devas, and weather elementals.

Originally, we were the same race according to Bernadette’s studies, but humans went into denser energies while the Fae stayed in the fairy realm which is also called the etheric realm. This is the same place where nature spirits reside.

Her strongest connection has been with the fairies of Avalon and from Arthurian legends. Since they live a lot longer than us, Bernadette says some are still actively trying to communicate with us because we share this planet, even though on a different dimensional level.

They are working to remind us to take care of the planet, the animals, and the ecological systems. What we have done to the earth is impacting their world as well.

While the nature spirits are working to create harmony, humans clear cut an entire forest which causes tremendous disruption to the energy of the area. The faeries are reaching out to convince us to do better and take care of the earth.

Meditate to Meet the Faeries 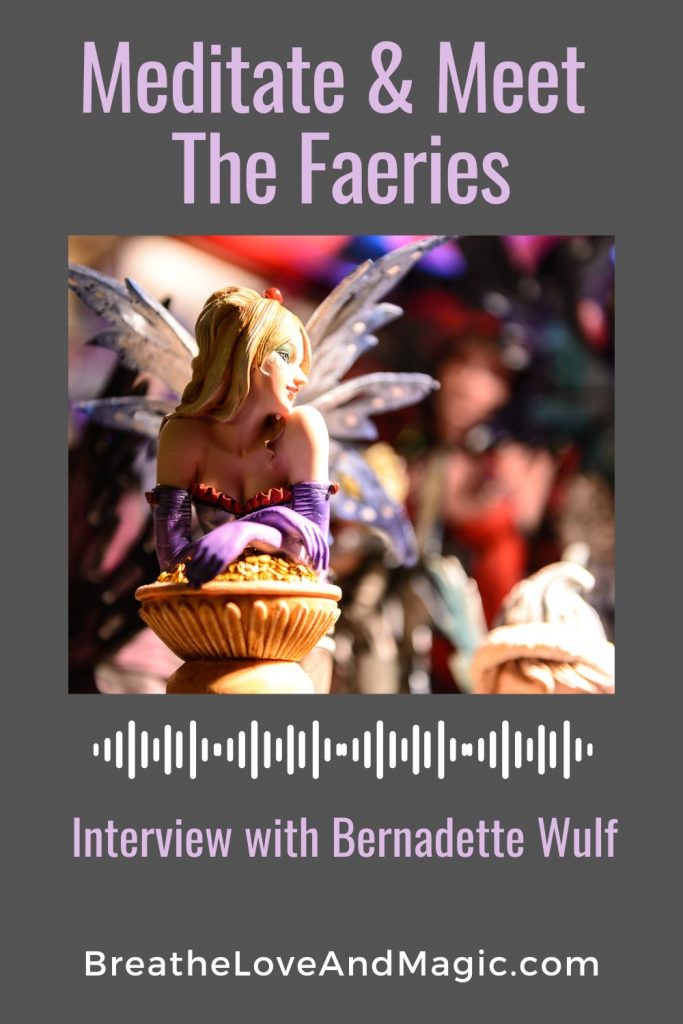 I asked about the group meditations she leads into the fairy realm. Recently Bernadette lead a journey to Avalon to meet with the Avalon Fairies. She’s also done journeys to meet the Sidhe, along with others. Whoever she works with are all very intent on bringing in the New Earth reality.

We are unlimited beings and although it can take time to manifest what we want; we are here to create our reality. This is a co-creative reality and working with the faeries makes the process stronger.

At times, talking about fairies can be confusing because there are the little fairies that work with nature and the Fae which are more human-like. The fairy means different things to different people.

I asked about the elves from the Lord of the Rings series and Bernadette said they really are the Fae, but the author, Tolkien, didn’t like how the word had become a derogatory term for gay people.

Listen to this podcast snack about the Faeries.

Then I was curious about her shamanic journeys to visit the fairy realm and I wanted to know if she goes with a bigger purpose or intent. How do people actually step into the New Earth now?

Bernadette says her fairy guides nudge her until she puts a workshop together. She channels them during the workshop, allowing the faeries to lead the program. A recent program was created to allow Morgan le Fay to help participants clear their shadows.

What do people come away with in terms of experience and knowledge. The World of Wonder, which is Bernadette’s free gift, allows people to see how the fairies see the world, where everything is malleable and beautiful. They bring in the arts music, singing and dancing.

The new earth offers a sense of freedom to create the world and your life the way you want it to be. You get to have what you want and everyone can do it the way that suits them. 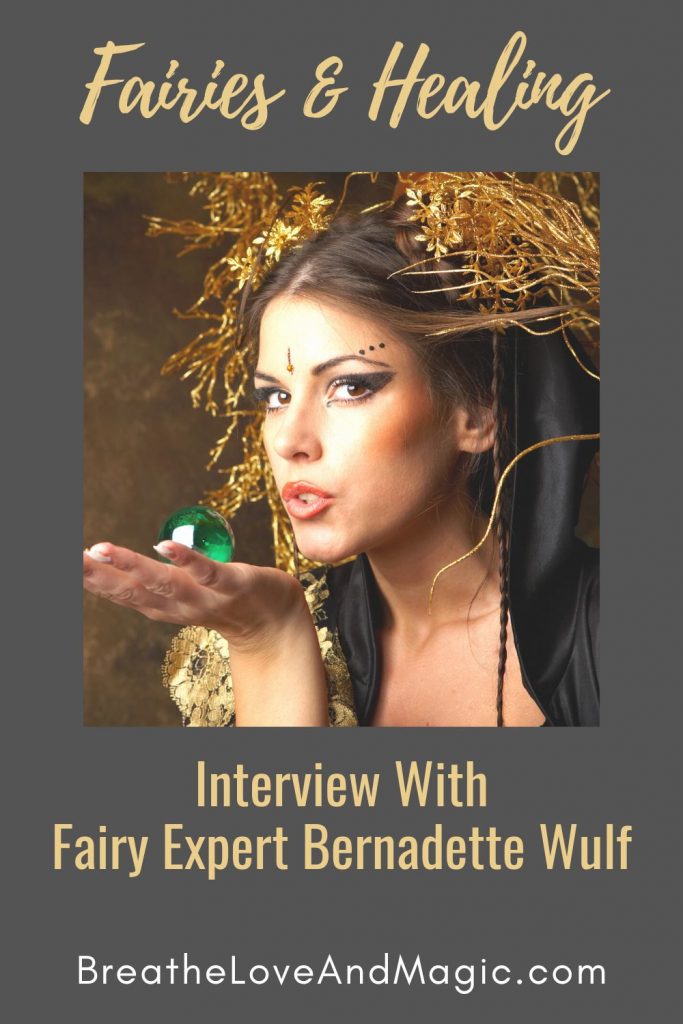 I asked, “What’s been most surprising for you about doing this work for decades?” Initially, Bernadette’s approach to connecting with the faeries was more superficial. But now the work has gone much deeper.

Most of the time she works with the same faeries, often with the Ladies of Avalon and a couple of elfin guides too.

In the past it might have been true that the Sidhe could be nasty when you crossed them. But today, those stories have really quieted down. The worlds have separated more, so now the Fae who want to work with humans step forward and the ones that don’t stay clear.

However, it’s essential to be honest and have integrity when working with the fairy realm. If you say you are going to do something, you better do it. They are very powerful, so never cross them and be sure to follow through on what you promise.

That’s part of moving into the New Earth – becoming more conscious of how our actions impact things. Like our buying habits for example. People as where was this made and what will happen to it when I’m done with it.

Curious about the Ladies of the Lake (also called Ladies of Avalon), I asked Bernadette to tell us a little more. She pointed out that they are shape shifters, so they can appear any way they want.

In Arthurian legend, they were initiating the knights and appeared as ugly old hags. But if the knights followed through on their promises, they could marry the ladies who would then appear as beautiful. Bernadette sees them as tall and elegant.

She got to know the Ladies of the Lake reading a lot of books about King Arthur, especially the earlier ones. As time went on and the church had more influence, they started demonizing the Fae women. The stories changed and became tainted.

Morgan le Fay became someone evil, but originally she was the Queen of Avalon or High Priestess. As the story evolved over time, she became a temptress as Arthur’s half-sister, who pulled down the whole kingdom. That wasn’t her original role.

Ladies of the Lake 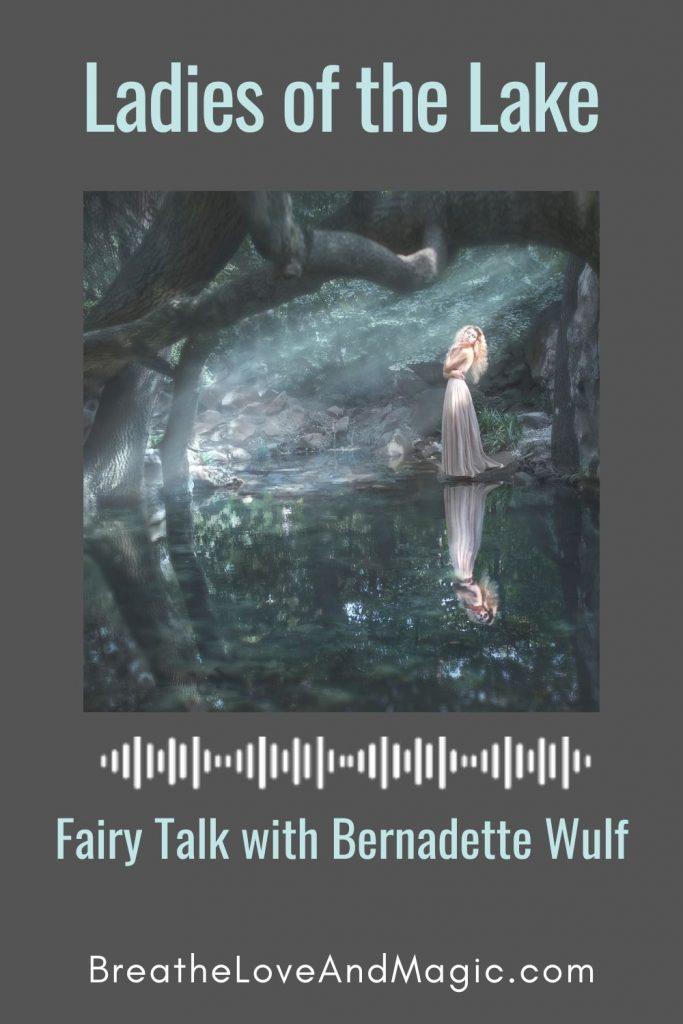 Guinevere was also originally from Avalon or the fairy realm, and volunteered to become human, marry Arthur and be his queen. This was done to anchor the energy of Camelot in the human world.

In addition, Nimueh, who was Merlin’s girlfriend or wife, was demonized. The stories were changed to say she trapped Merlin in a tree or tower, but the couple actually worked together. He came and went freely, so this was not how the original legend was told.

In the book, The Mists of Avalon, Marion Zimmer Bradley seems to have gone astray from the original story and according to Bernadette she had a more material way of looking at what transpired with the Ladies of the Lake. I had always loved this book, so was disappointed to hear this.

As the Arthurian legend changed over the years, and the women were demoted in terms of importance, intent, and spirituality.

Another example is the addition of Lancelot who was NOT part of the original story. In other words, in the original tale, Guinevere did not cheat on Arthur with Lancelot, since he didn’t even exist as part of the legend.

I never thought about how poorly women were presented in this legend or that were amended by the church and the patriarchy. Good to know the women of Camelot were from the fairy realm and meant to remind of us our divine feminine spiritual nature. Phew!

Bernadette shared a few books that are closer to the original legend.

Guenevere and the Round Table

Excalibur & the Sword in the Stone 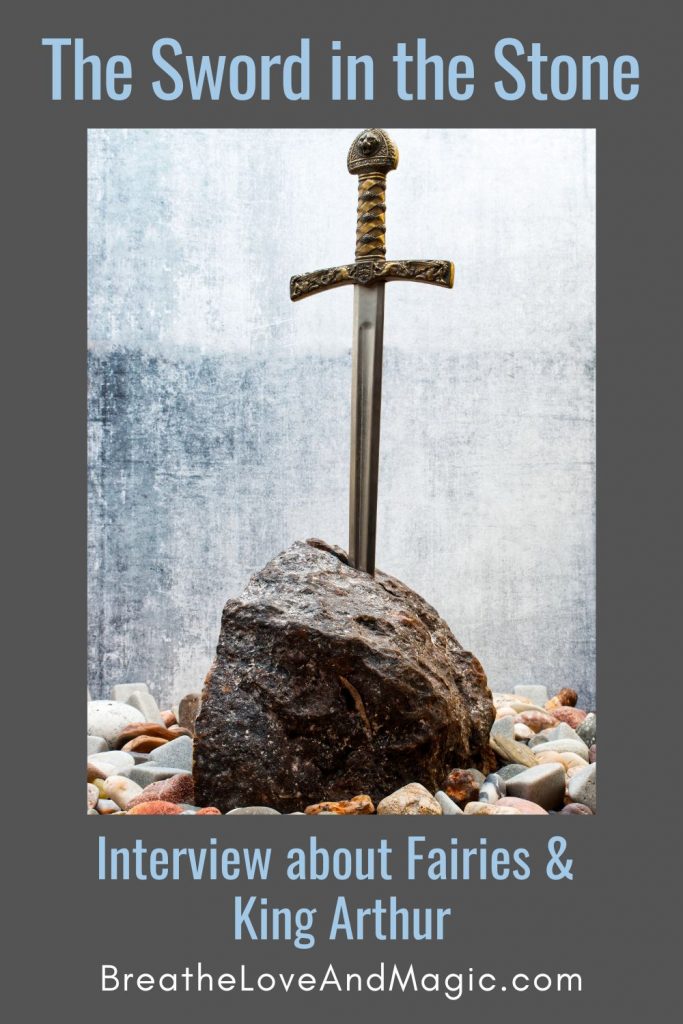 We explored other parts of the King Arthur story including the sword in the stone, Excalibur, and more. So, what is our take away from these stories?

The point is to reconnect humanity with the sacred symbols and rebalance us. Today, the faeries want to awaken our spiritual side and divine feminine nature, which has been lost or repressed over the centuries as we moved deeper in to a patriarchal world.

One reason these stories are so popular, is because they still ring a bell in human consciousness, reminding us that there is another reality and of our original spiritual makeup.

What a great interview! Thanks Bernadette!

Health, Wealth & Faery Magic Teacher Bernadette Wulf is sought out by intuitives, sensitives and empaths to guide their way to the New Earth reality!

Step with me into the New Earth now with her where effortless prosperity and thriving in harmony with all life is the new normal. Bernadette is passionate about connecting you with the faery realm, protecting the environment, plant-based nutrition, the well-being of all life, creative expression, and magical manifestation of dreams coming true.