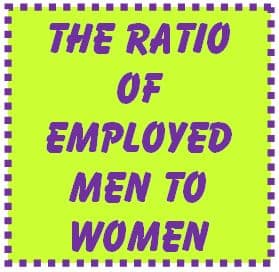 According to the NY Times, a new study conducted by Pew Research lists the top cities for finding true love with men who are employed. Employment is certainly one of a woman’s top criteria for choosing a mate. In this post I’ll review the cities which have the most favorable ratio of employed men to women.

1) Clarksville, TN   This town was made famous by the Monkey’s song in the 60’s “Take the last train to Clarksville”. While the ratio of employed men(145) to women (53) is the best in the country, I’m not sure where people work in this town. Besides the Austin Peay State University and Fort Campbell which is an army base 10 miles out of town, I’m not sure where people gain their employment and there are only 133,000 residents. Doesn’t really look like a booming town or a great tourism destination, so I’d advise you to skip that last train to Clarksville.

2) Silicon Valley, CA   The southern portion of the San Francisco Bay area, Silicon Valley is by far the best possible option in the USA with a population of 3.5 – 4 million. Here the ratio of employed men(114) to women (71) bodes well for finding a mate based on the numbers. But those technology jobs are disproportionately held by men holding 77% of all senior positions.

In addition, you must love geeks if you are putting your hopes for finding true love in Silicon Valley. I realize that is a sweeping generalization but probably close to the truth. If you’ve even watched the TV show The Big Bang Theory, you’ve got a good idea of the socially awkward guys we’re talking about which does make for hilarious comedy.

I met a high tech CEO recently who explained why geeks make such great partners:

So if you feel Geek-inclined and have techno talents to get a job out there for yourself, go for it. Keep in mind that all those high tech companies also hire sales and marketing guys who would have better social skills, so they are also potential date options.

3) Beloit, WI   This tiny town with a population of just 37,000 has a ratio of 91 working men to 81 women. Maybe this is a charming place to live, but it looks sort of, well…dull. I admit I don’t know much about Wisconsin except their cheese-making skills. The town is famous for a product called Korn Kluts (like Cheetos) and they have been credited with starting the snack food industry. See what I mean? Please don’t go there.

4.Bismarck, ND   The second largest city in North Dakota after Fargo, Bismarck also has a relatively small number of residents at 124,000. According to Forbes magazine, this is the seventh fastest growing small city in the US which means at least the economy is good. But the ratio is getting very close with 96 men to 91 women who are employed. Since those odds are no longer really in a woman’s favor, why drag yourself out to the northern plains where the cold is so intense? I don’t see this as a gold mine for true love even if there is gold in the Black Hills. Oh never mind the Black Hills are in South Dakota!

5. Washington DC    As the capital of the US, the tables have turned on the ratio of employed men (92) to women (94). As it turns out there are only four cities that favor high numbers of gainfully employed men. Personally, I abhor politics and that is the greatest employer –politicians and their staffs, and then of course government workers and the military. If you are after a power-hungry politically-minded guy or a man in a uniform, this might be the place. But politicians aren’t really known for their faithful nature. So, I can’t see any reason to go running off to DC in the hopes of finding true love, unless you already live there – then that is good news.

What Is the Best Place for Finding True Love?

You might not think this is possible, but you can find true love right where you are. You don’t need to move or go to great lengths as long as you are willing to open your mind, eyes and heart to the single men around you. Yes, they are in your area!

How to Make the Most of Your Own Town

If you are having trouble finding a relationship, take my Dating IQ Quiz and discover what areas of your dating life need a little tweaking. I’m here to help, so give me a call 203-877-3777