Wondering “Should I text him first?” My advice for the most part is to let men lead at the start of dating. That’s the only way you ‘ll know if he’s truly interested. 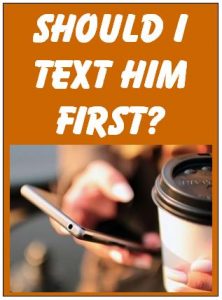 Tell Me Ronnie, Should I Text Him First?

I met a guy about a month ago. The conversation was great and I was really impressed. I gave him my number but had trouble putting my number into his phone. He called me while he was in front of me so that I would have his number. When I returned to my phone I realized that the call did not connect. I was devastated. I had no way of contacting him and I was really interested in this guy. I had not met a person that has ever been able to hold my attention and that I was this attracted to ever.

This week I am at the location we met and I run into him. I explained to him that I never got the call and I had just given up on ever seeing him again. He tells me to take his phone number and gives me his business card. I let him know that I will call him later. I texted him later with my contact information and told him when I get off work and let him know he is free to call me when he has time.

He responded and said, “It was great seeing you too. I will call you later in the week.” I replied, “No problem.” Is it improper to send a friendly good morning text three days later? Or should I just be patient and wait for him to contact me?

So Excited in SoHo”

I do understand your excitement about this man, but take a breath and think about it. You left this question for me on the post about not chasing men. The concept does apply to this situation and to you. It’s great that you managed to run into him so you could get his number. But he had yours right and…he didn’t use it. That’s your first sign he’s not as interested as you are.

Then when you ran into him, you expressed how you had given up on ever seeing him again. This may have seemed to him as a bit overly enthusiastic. I tell my clients that dating is like playing poker and you have to keep those cards close to the vest. Otherwise your genuine enthusiasm for liking him can be a turn off.

So now you probably won’t be surprised when I answer your question, “Should I text him first?” by saying PLEASE DO NOT text him first again. He knows how to get in touch. He has your contact info. Believe me, when a man is genuinely interested in you he will get in touch.

So that means if you don’t hear from him, nothing happened to him or his phone. He enjoyed meeting you and the conversation, but he might not want a relationship. He might already be n a relationship or you might not be the woman for him.

The entire point of the blog post is not to chase men – let them come to you. So asking should I text him first, is your first clue you are going about dating in the wrong way. Let men lead at t he start of dating. I call this the Ballroom Dancing Theory of Dating.

If you decide not to take my advice and contact him, nothing bad will happen. But you sure won’t find out if he would have contacted you on his own which would indicate he has some interest.

Sadly, I want to prepare you that you probably won’t be hearing from him. Make a real effort to meet men and you will find certainly others who interest you. My bet is this man was sent to you to wake up your desire, so you will take steps to find the love you’ve been wanting for a while.

2 thoughts on “Should I Text Him First If I Don’t Hear from Him?”