Should I date a separated man? Many single women ask me this. If you’re new to dating, let me clue you in on the best approach to this situation. 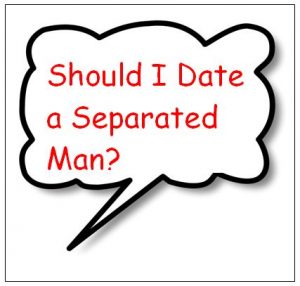 I dated a man last year who told me he was separated from his wife. He said she’d been distant for 7 yrs, moved out 2 yrs earlier and he was ready to move on. We met in a workshop he taught and we all hung out talking until he and I were alone.

I offered to draw his portrait. While I did, we shared about our lives and at the end of the night we kissed. Then we made plans to meet before he traveled back to his home. We dated for a few months until one day he told me his wife had moved back in without telling him.

He came back from a work trip and there she was. He said he loved me but loved her too and didn’t know what to do. I told him I wouldn’t be a mistress or the other woman but would continue working with him and try to be his friend. This is why I wondered from the start, “Should I date a separated man?”

He would often share a little too much about his relationship with his wife and their ups and downs which was difficult for me. And sometimes he flirted and said he missed me.

So I am stuck feeling guilty that I can’t have a good working relationship with him. But I also feel like I can’t trust him anymore. My gut tells me to stay away and think I’m afraid of letting him go.

Thanks for your help!
Shelly”

Your instincts to stay away are on target. If you can’t trust him, how could you work with him, never mind have a relationship? Trust is the foundation for any relationship – business or romance.

I also question some of this man’s story. After two years of not living with his wife, they still didn’t get divorced? They didn’t even start proceedings? That sounds fishy to me. It makes me wonder if she ever moved out.

He said he was ready to move on from her but, he didn’t do anything about it except date you. That’s not the sign of a man who is done. Was he really ready to move on or just ready for a fling…with you?

How do you know his wife really moved back in? Did you ever stay at his house? I suppose his story could be true, yet the end result is the same. He went back to his wife and shut you out romantically.

Why is he telling you about his relationship with her? Was he looking for sympathy? Why did you listen? Did you benefit from these conversations? My bet is you were being “nice” and a good friend and you didn’t benefit at all. I caution women about trading sympathy, friendship and listening skills in the hope of a man’s love.

I’m not sure why you feel guilt over not being able to work with him. Do you somehow feel you are letting him down? Seriously, I hope you don’t feel that way. You have nothing to feel guilty about since you didn’t lie, cheat or send him packing.

For most people, mixing business with romance ends up in some kind of drama. Both have their own kind of stress, but put them together and whoa! As you can see, when one thing hits bottom, the other follows quickly.

Last but not least, let me address being afraid to let go. You are not alone with this fear – many women feel that way when it comes to breaking up. But if you sit back and think about this objectively – there’s nothing to let go of because you’re not in a relationship with him – he went back to his wife.

The only thing you’re letting go of is HOPE that there might be more again someday. That’s not actually anything…real. Hope works wonders when it comes to illness. But when it comes to love…it’s the cause of so much unnecessary heartache.

He’s already gone. Your only choice now is to LET GO. The sooner you do, the sooner you’ll heal so you can get out there and meet someone new.

So if you are seeking lasting love, my last comment on your question:

Should I date a separated man?