Are you wondering, “Should I call him?” That’s a common dating question a that drives single women crazy. To help with understanding men, let me explain when you can or shouldn’t call a man. 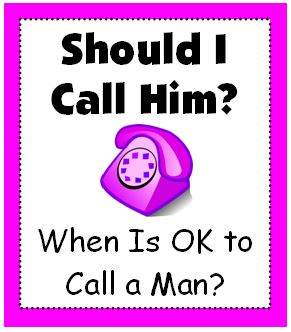 Should I Call Him? Get Help Understanding Men

My question is, should I call him? I’ve read many of your posts and understand the point about not pursuing the guy. But, at what point should I feel like I can communicate and not just wait for him to initiate conversation? How many dates is that?

I’ve been dating a guy I met on online site for a little over 2 months now. We text each other almost every day and have been on 4 really good dates. Should I still wait for him to text me first and initiate dates?

Thanks!
Tired of Waiting”
Dear Tired,

There are two points in your question that I want to address for you. The first and obvious one is when it’s OK to call a man. I tell my dating coaching clients to hold off until you see good evidence of his interest and pursuit. Four dates is usually fairly safe but you can wait a little longer if you want just to be sure you don’t risk pushing him away.

Of course, calling him once in a while is fine, but many experts agree that before you get to exclusivity, you want to avoid over-communicating with a man. So, a ratio of one to three is recommended, which means you call or contact him once for every three times he initiates contact. This way, he still pursues you and won’t feel crowded or like he’s not in charge of the situation which is very important to most men.

Now you don’t have to keep a tight count. Just be conscious not to overdo. Sometimes women love texting and go back and forth a lot more than a man might (I know it’s often the other way around with no phone calls at all but that’s a different subject.) Men have told me specifically that some women over step their bounds and this is a turn off.

So to be safe, don’t call or initiate texting too often and follow his lead.

The second point is four dates in two months (approximately every other week) doesn’t show very strong interest on the guy’s part. He might be interested in keeping this casual and slow. He’s probably dating other women too. Texting between dates is nice, but a man who is genuinely interested wants to see you more often and talk to you on the phone. Texting in between can be an easy way out for a guy seeing several women.

So, given his track record, I wouldn’t start calling him and I would be open to dating other men. You are not in an exclusive relationship, so don’t be tempted to act as if you are. Feel free to see him if you want, but don’t leave yourself open to heartbreak thinking he’s the one. He hasn’t really shown you that yet.

This is why it’s better to follow his lead and not initiate anything at this time. So to answer your question “Should you call him?” I’m going to say no, not at this time.

You want to see what he will do on his own without your prompting so you know how often he wants to see you. If the gap between dates closes and you start seeing him more than once a week, then you know you are heading for a relationship. But if the two week gaps continue, he might not be the right man for you.

2 thoughts on “Should I Call Him? The Rule of Thumb about Calling Men”