Can you call a guy or is that a bad idea?There are a number of dating questions like “Should I call him?” that women want answered and that’s what I’ll do in this post. 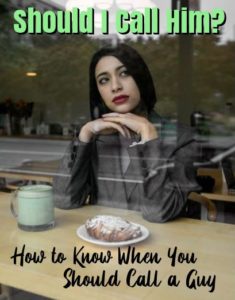 Should I Call Him?

You met this great guy at a friend’s party or some networking event and really hit it off big time. You exchanged numbers, but now three days have gone by and you haven’t heard from him. Honestly, you find this a bit surprising. So, the thought comes to mind rather naturally, should I call him?

This is question that women struggle with at every age and across the globe. What’s the best way to handle this situation where you felt a strong connection, yet nothing is happening? You may even think being a modern woman that there’s no big deal today about calling a man.

The women who wrote the book, The Rules had plenty to say on this topic. From a traditional standpoint, the authors are emphatically against making the call. They would say no way should you call a guy. Ever.

When Is It OK To Call Him?

Honestly I don’t advise calling men as a rule either.  Women who do this tend to get very frustrated and feel like they are doing all the work in the relationship. And it’s true – they ARE. That’s the very reason I recommend NOT to call a guy.

Sometimes, you feel like if you don’t call, you are gong to totally burst or lose it somehow. OK then, if you must go ahead and call a guy ONCE. You can reach out and leave a fun flirty message, just don’t ask him why he hasn’t called. or that you were waiting for this call. You don’t want to look desperate and often initiating can make you appear that way. So whatever you say, keep it light and fun.

How A Man Gets Invested In You

What you REALLY need to know is how a man gets invested in you. To understand men, first you need to realize that much of dating is still based in our DNA and that is ancient. Dating behavior in men has not completely caught up to gender equality in many societies.

Things have improved is a bit in Scandinavian countries where gender equality has really taken hold. And in the USA for the under 30 crowd, gender roles are bit more balanced and progressive.  But for men over 40, your best strategy is to go traditional and let the man lead.

Hearkening back to the hunter-gatherer period in human history, men hunted to feed their family and the tribe. This is in our DNA as evidenced by the fact that today men still have better long distance vision than women. This was so they could hunt well and bring home the meat for basic survival.

On the other hand, women have better peripheral vision to gather food and watch the children. So, these skill sets are not learned as much as coded into each of us. That’s why men like to pursue women. Since they don’t need to hunt for food to survive, they enjoy sports and pursuing women. And that is how a man gets invested in you.

Why You Don’t Want to Call

Let’s take a good look at how this works. Let’s say you call a guy because you haven’t heard from him after your first encounter. He sounds happy to hear from you which is great! You talk about getting together and he says he’ll get back to you with a date ad time. Perfect.

A week goes by and you haven’t heard from him again. You wonder, “Should I call him? I already called him once.” But what the heck, you decide to give it another shot. The good news is he’s happy to hear from you and sets up the date. After a fabulous date you are really excited. But time ticks by and again he hasn’t called. Now what?

This is now a pattern. You call him and he’s happy but he makes no move on his own. Is this a man seriously interested n you? NO WAY! He might respond when you call, but it’s all on your girlfriend. And that is NOT a good sign if you want lasting love.

Men Want to Win You Over

Once you set up a pattern, it’s next to impossible to change. So don’t even get started. Or promised yourself you won’t call more than once, ever. Then keep that promise no matter who you meet or how great he seems.

Going back to DNA, men want to pursue you and win you over. This is why I always say the chase is still alive. When you are not overly available, (i.e. not doing all the work, contacting him and setting up dates,), he gets invested in winning you over. You become a challenge and so he wants to see it through to win you over and claim you as his.

I know this is shockingly archaic, but that’s how it is over 40. men between 30 and 40 may vary, some being more traditional and some being more hip so that’s a tough age range. But over 40, they are still coming from this place.

Will You Let Him Win?

Now that you understand what is going on, will you still call a guy? Or will you wait to see if he calls you? Because if a man doesn’t call you, you have to come to grips with the fact that he wasn’t that into you. Even if you had the strongest connection in the moment, and hot chemistry it just wasn’t enough.

Learn to lean back as they say and allow him to be the man. Either he’ll want to be in touch, or he won’t. But you’ll never embarrass yourself by not calling him. If you want to learn more, you can read my post on the Ballroom Theory of Dating.

When Should I Call Him?

After you’ve had 6-8 dates within 6 weeks or so, then things change a bit and you can call once for every three calls he makes. This is just a guideline. You still want to give the man space.

Or you can “mirror” what he does. Certainly call back when he reaches out or texts. And you can take turns so after he calls and you talk or call back, you can reach out the next time. I still vote for less being better. Just don’t go over what he does because chances are he might easily get uncomfortable or worse, turned off.

What If He Just Stops Calling?

If a man you went on a few dates with stops calling, then he’s lost interest. Don’t take this to heart. He might not know what he wants, might not be ready for a relationship or might have decided the two of you are not a match. Better than investing months and finding out later.

Ghosting is common, but the truth is – this has always been the way.  When I was dating to find love, most of the 30 men went on only one date with me and were never herd from again. That’s why you want to date more than one man at a time – to hedge your bets and keep dating until you find a man who sticks around.

If you want more about how to attract a quality high-caliber man, listen to my Free audio program 5 Surefire Ways to attract a Quality Man