This reader has a question about rebound relationships and how to avoid getting into that kind of difficult emotional situation. Here’s my dating advice to help with understanding men and the rebound. 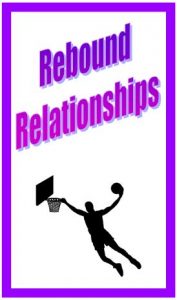 8 Tips to Recognize a Rebound Relationship

I’m dating a man who has only been divorced for four months divorced. But, he was separated for more than two years  I’m not chasing him at all and let him contact me for the most part with a few exceptions.

How do you know if you are in a rebound relationship? His actions say I’m not, but then again, I don’t know what actions would prove that I am a rebound.

He tells me hasn’t been intimate with anyone for three years. So, I’m not sure if I’m the object of desire or a true potential long-term partner. We see each other on average two times a week for dates and we are not intimate every time.

I’m used to listening to what men say and not watching their actions.  He’s not the type to give me compliments, but his actions speak to the fact that he is interested. And he does keep scheduling dates.

I want to make sure that I’m not filling the intimacy void and getting myself into a rebound situation. Any advice?

This is a very tough question with no easy answer. But I’ll do my best to give you some signs of the rebound so you can make the decision that’s right for you.

Therapists agree after a divorce or break up, everyone needs time to heal and the majority suggest a period of one year post divorce before getting seriously involved. People need time to clear their hearts and minds of a love gone wrong. Even if a man or woman has been separated for years, the final divorce still takes its toll. Here are XX signs to watch for to help you know you might be in a rebound relationship.

1.Needs Healing – If healing is not addressed, then people sometimes rush into the first possible relationship. They don’t take time to evaluate the situation. Many rebounders go for the same type of person again and again because that’s what feels familiar and comfortable. Sadly if your type of person didn’t work once, that type might just not be a good match and you’d be better off checking out a different sort of person.

2. Misses Being a Couple – Some men just miss being with a woman, from companionship, to sex, to a soft place to land. They crave female interaction and don’t want to go without. So they jump into a new relationship the first chance they get, without thinking things through. Too bad this might crop up after a few weeks or a few months when he breaks up with you and leaves you wondering what just happened.

3. Compares You to His Ex – Does the man you are seeing compare you to his ex? maybe there are ways in which you shine compared to her. Or there might be a few things he misses where you fall short. Either way, when a man frequently compares you to his ex, that’s a surefire sign he’s not over her yet.

4. Talks about Her Constantly – No matter what conversation you are having, you can count on your guy bring in up his ex. Whether he misses her, criticizes her or hates her, he’s still connected to her. And that means he’s not relationship ready to be with you. You are his rebound!

5. Wants You All the Time – Your relationship is very physical. Let’s just say he’s hot for you. But maybe you don’t have lengthy conversations or don’t seem to do other sorts of activities. You might start to wonder how much you have in common. When a relationship is very physical just after a man has a breakup or fresh from divorce, chances are very strong he’s working things out through you – an that girlfriend is a typical rebound relationship.

6. Friends Say it’s Too Soon – When a man’s friends tell you they think it’s too soon for him to be dating you – PAY ATTENTION. They KNOW him and know what’s off about him or not right. They are telling you he’s not ready so take this advice seriously.

7. Seems Too Eager – Even though he doesn’t know you that well, he’s eager to move things along. It might make you a bit suspicious or curious about his motives. There’s no reason to rush, unless he can’t stand to be alone and he needs you for to rebound from his divorce or breakup

8. Prefers to Keep Things Casual – He misses feminine attention but wants it all on his terms which are casual at best. He isn’t ready for any sort of commitment. While most men aren’t at the start of dating, he is more open ended, loose about plans or vague. He’ll say things like let’s get together this weekend” but won’t make definite plans until the last minute, leaving you hanging. Can you say “Rebound”?

From what you have mentioned, your guy doesn’t seem to fit int these patterns. He’s not in a rush, isn’t just interested in the physical, seems to be on an even keel and not needy. Hopefully, you aren’t his rebound relationship, but only time will tell.

So, in the mean time, keep your eyes open and enjoy the ride. Once in a while, a recently divorced man isn’t going to enter a rebound relationship, but is actually ready and you may have found that one guy in a million.