Home » Blog » Dating After Divorce » Over 40 Dating: Why Does Dating Seem Like an Uphill Climb? 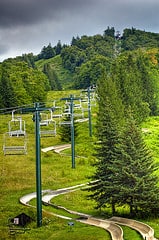 This past weekend I went to Vermont with my husband.  While this story might not seem to have anything to do with dating at first – it will. Trust me.

My husband has an annoying habit. He loves to walk in the woods, but somehow always manages to find a trail that leads uphill for the entire trek (or most of it.) I despise physical challenge. I walk the treadmill with absolutely no incline – I mean flat.

We  pull off Rt. 9 into Molly Stark State Park which seemed quite nice at first. Paul checked in with the park ranger as requested, paid the fee and got the map of trails. He came back very excited because there was a lookout tower  with a great view. The ranger assured him it was not a steep climb, just a moderate hike.

Apparently, we have a very different perspective on what “not steep” means.

We begin the walk (or should I say climb?) Immediately the path becomes very steep – maybe a 45 degree angle. Tree roots jut out every where and I am huffing and puffing. Paul says it’s only eight tenths of a mile so this shouldn’t take that long. (We were in the woods for  nearly two hours total!)

After about 45 minutes I was crying uncle. Sorry, I was not having fun. I suggested to Paul that he go up and I would continue at my own pace. Paul went off at a good clip.

While alone in the woods, I had plenty of time to think about things. What came to mind was the weekend we got engaged. We were in Northern VT, near Jay Peak ski area. We entered the park and looked at the mountain (which was deceiving) and decided to climb up to the top. I didn’t know any better back then.

Two hours later, two people sped passed us. I shouted over to them, “Do you know how much further it is to the top?”  They replied, “You’re doing great – only another  hour.” Another hour? %#%#*&!!!

I was so done and wanted nothing to do with going further. Paul tried to encourage me by saying he’d ask me to marry him officially at the top. I sniped at him, “I already have the ring!”

But I did keep going and we made it. What a beautiful view. Breathtaking (literally for me). Paul did ask me to marry him, officially, once we  sat down and started breathing normally again.

Both climbs were reminiscent of my dating journey. It had truly felt like an uphill battle for many months. I dated 30 men in 15 months cramming 20 years of dating into a little over one year. It was fun. It was hell. It was joyous and devastating. It was worth every moment once I got to the end of the trail (or the top of the mountain) by marrying such a wonderful guy.

If you feel like your dating journey has been an exhausting uphill climb, please remember my story. Perhaps it will encourage you and give you hope that it will all be worth it. I share this story will all my dating coaching clients to inspire and provide proof that finding love after 40 is possible and real.

I have a matchmaker friend Nicole LeClerc of www.Compatibles.com who I actually met while teaching a workshop in Burlington, VT. Nicole says that no one looks back at their dating journey, once they’ve found lasting love, and complains that it was a waste of time. Very wise Nicole. And very true.

Keep your trek going. Take breaks when you have to and enjoy the time when things seems to level out.  Know that whatever you go through, no matter how crappy things seem, it will all be water under the bridge once you are with the right man for you.

I found love after 40. That’s why I am so certain it can happen for you  as well.