Home » Blog » Dating Strategy & Attitude » Dating: 2 Big Reasons Not to Chase Men & What You Can Do That’s Better 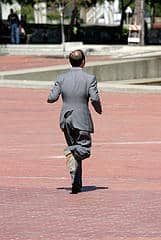 As a dating coach, I often notice trends in the dating stories my clients share. One of the most common complaints from women is that their efforts to let a man know they are interested are often not successful or well received.

This is always a clue for me into what their dating efforts look like. For many women, there seem to be few opportunities; so they tend to go into warp-drive when a man shows up. Warp-drive is for Star Trek, not dating. Let me explain.

“The Chase” is old school terminology describing what a man does to win a woman over. Surprisingly, this concept is still firmly entrenched in the male ego. Even today, with the amazing equality between the sexes, the chase still exists. Dating has not progressed and continues to be an archaic mating ritual based in biology. This seems counter intuitive and is the main reason many women struggle.

Independent women who have made it on their own, have the tendency to rely on their business or life skills to get things started with men. However, this strategy usually backfires. Here’s why:

1. Men don’t like to be chased
– I have spoken to many men who clearly state they don’t want to be chased. Calling men, frequent emailing and texting, asking them out; these behaviors turn them off! Sometimes a guy will be curious or flattered, but ultimately most want to initiate dates. This applies only to the first 4-8 dates and shifts once you move into the first phase of relationship so please don’t fret.

– When you chase a man, he may become suspicious, wondering why you like him so much. Honest, this is what men tell me.

– When you chase a man, he may think his chances of “getting lucky” with you are really good. According to a study at Rutgers University, college boys first claimed they like aggressive women, but later admitted they prefer to initiate.

2. Men don’t like the chase to be too easy
– This is true of both men and women when you think about it. For men, the caveman part still wants to conquer. If you are available at the drop of a hat, cancel other plans, jump when he calls, you are not creating any tension. This isn’t about playing hard to get, but it is about not being too easy.

– If you gush about how awesome he is and seem overly enthusiastic, this is also a turnoff.  Think how it is with a guy who is too nice, too eager, or calls too much. You likely prefer a man who is more aloof or at least waits a couple of days to call. That way you feel he’s confident rather than needy right? Well men feel that too.

If you wondering what you should do instead of taking charge and doing his job for him, here are three great analogies that help clarify. Keep in mind If a man disappears because you didn’t chase him, then you have learned he is not the right guy for you.

1. Dating is Like High School Chemistry
In chem class when you did experiments, you put everything in the beaker, turned on the burner and OBSERVED. No mixing or adding ingredients – you just watch to see what happens. Same thing goes for dating. You want to know what a man will do to win you over without doing his job for him. Otherwise you can’t collect important data about his true interest level.

Don’t muck up the experiment! Your job is to be charming, appreciative and watch what he does to see if that meets your needs. Things never get better than the first three dates, so if you don’t see what you like, you never will.

2. Dating is Like Ballroom Dancing
To dance well requires one leader and one follower. Two followers won’t go any where and two leaders will struggle. Initially, it works best to follow the man’s lead in dating. That means don’t pick up the phone unless it’s to return his call, don’t ask him out, or buy tickets, for at least the first three dates.

3. The Yin and Yang principle of Dating
This ancient Eastern symbol of balance has a black side and a white side. The sides are the same size and shape and fit together to form a circle. But the sides are not the same and do not blend (even though there is a bit of the other in each side). The pieces mirror each other but are DIFFERENT. So as women, stay within the black and let the guy own the white side to watch what he does without your prompting.

As I share with my dating coaching clients, if you feel confused about your next step with a man, resist your desire to take charge. Instead, remember these powerful analogies and hang tight. I guarantee that your dating efforts will be far more rewarding and you won’t chase anyone away by inadvertently doing his job for him. Rely on these proven techniques rather than your chick-in-charge instincts to find the love you want and deserve.

26 thoughts on “Dating: 2 Big Reasons Not to Chase Men & What You Can Do That’s Better”