Mixed signals are such a problem when dating – from both men and women. In this post I unravel a massive tangle of signals to get to the bottom of this painful, emotional pile up 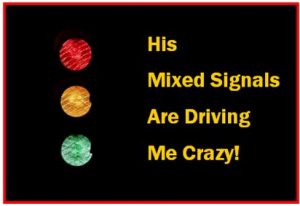 His Mixed Signals Drive Me Crazy!

I am 50 and have been “friends” with a 45 year old man who I met in salsa dance class. He was clearly interested and pursued me, but we started out as dance practice partners. We met regularly and he clearly was attracted to me and pursued me. At the time I was happy in my single state and did not want to be tied down to one guy. I was having fun.

As we got to know each other it became clear that he was feeling me out for something more, but we also became intimate and he made it clear that he did not want a relationship right now. Those are some mixed signals! He was 5 months out of a long-term relationship. It has now been about 9 months and he has pretty regularly texted and/or called me every day.

Months ago he told me we needed to stop the sex because he valued my friendship and didn’t want to lose me. He also decided that he wants to have a kid (I have 3 grown children), and he said that if he had a child already he would be with me, but he won’t feel complete if he doesn’t at least try. His actions with me continued to show that he really cared for me and wanted to spend time with me and help me wherever he could. Again, more mixed signals.

Several times I’ve said I didn’t think I could continue with this situation, but he convinced me to stay. Most recently, I let him know I felt like I might have to let him go to protect my heart, but we continued contact. I went on vacation for 3 weeks and we texted occasionally. He called (I missed the call) and then texted me on the day I told him I was returning to ask if I was home yet, and then he didn’t contact me again.

I don’t know what to make of it. These mixed signals are driving me crazy and this doesn’t seem like him at all. We did not fight or anything like that. I’m hurt and confused. I know he’s going through a tough time with work and he’s trying to figure out his life right now, but that doesn’t excuse suddenly not calling anymore. Should I give him the benefit of the doubt and ask him if he’s okay or should I just stay silent?”

Thanks for your help,
Close to the Edge”

My heart goes out to you because this is a difficult situation with so much going on. It’s like a tangle of mixed signals that would leave anyone feeling confused.

I”m going to take this piece by piece to make sense out of it.

It started with you not wanting to be tied down. While I understand that, when a woman switches agendas while dating a man, that usually creates a problem. Why? Because you weren’t serious about him and that probably worked for him or made you more enticing. Then you changed your mind but he didn’t change with you and the problem began. You two do not have the same outcome in mind for this relationship.

You say he was “feeling you out for something more”. Since he made it clear he doesn’t want a serious relationship, sounds like the something more was sex.

Men will call and text every day and even want to see you several times a week, yet not be serious about you. If the sex is good, they often stick around. That doesn’t mean they want a committed relationship that deepens. They may even really like an appreciate you but know you are not a good match for their vision of relationship. Sometimes, even love is not enough.

Women find his very confusing, but you have to trust me here. Men don’t change their minds about your long-term potential. That happens when they meet a new woman who somehow triggers that desire for commitment. You know what I’m talking about. You’ve seen it happen.

He Tried to Do the Right Thing

He said he wanted to stop having sex so he doesn’t lose your friendship. But the two of you didn’t stop. He was definitely trying to pull away because he knows that even though what you have is good, you can’t meet his desire for children (and perhaps other things).

Again, your agendas do not jive. He tried to do the right thing by backing away but was unsuccessful. He does care about you, but unfortunately that doesn’t make you a good match.

You know in your heart something is not working and you told him you couldn’t continue. Yet, you didn’t keep your word or hold to your own truth about the situation. You let him talk you into staying against your better judgment. This means you are sending your own mixed signals.

Relationships Can Be Addictive

It’s possible that you have been addicted to each other. That is not a healthy situation when you both know you shouldn’t be together, yet can’t seem to part. I’ve seen this happen with other couples. You probably have magnetic chemistry which makes it hard to resist, but is not an good indicator for lasting love.

Then you went away on a three week vacation. Its very possible that being away from you gave him the time and space he needed to get clear. He knows you are not the woman for him and you have told him you need to protect your heart. So, to respect your needs and wishes and at the same time to move on to achieve his goal of having a family, he decided to let go.

He called once but you missed the call. He might have taken this as a sign to leave well enough alone. The three week separation probably helped him see that talking to you one more time could easily start things up all over again.

He Is NOT the Right Man for You

You KNOW he is not the right man for you. You wanted to pull away. He’s talked about backing off. Why call him when this is the simple easy end to a relationship that had it’s good points, but was never going to become anything more?

You now have the freedom from each other to let go and move on. I hope you go for it.

What do you need to say to each other? When the two of you talk, nothing changes. Better to not call or say a word so you both keep the composure and strength to stay away from each other. This way you miss out on saying hurtful things or some huge emotional scene that makes you feel even more devastated.

Know What You Want Before You Start Dating

Next time you are ready to find a new man to date, be honest with yourself about what you want. This way you can more easily spot a man who has the same desire as you do – a long-term, committed relationship. You’ll know to stay clear of men who want a more casual arrangement.

If you want to know how to spot the wrong men quickly, call me [203-877-3777] for a free dating discovery session or get my book Is He the One? Find Mr. Right by Spotting Mr. Wrong on Amazon.