Do the mixed signals men send have you confused or frustrated? When it comes to understanding men, these insights will help clear things up quickly. 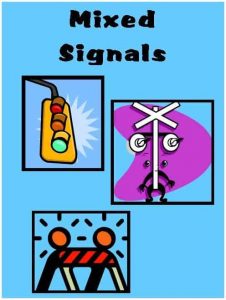 His Mixed Signals Confused Me and Turned Me Off!

I hope you can help me with some mixed signals I’m getting from a new guy I met online. I emailed a guy on Match.com Sunday morning and the guy responded back that afternoon around 4:25pm which surprised me. He complimented me on my pics, saying he thought I was nice looking and i responded right back around 4:38pm.

He then texted me back at 5:50pm saying he left his phone in his car and was “sorry”. He does stand-up comedy and had a show that same night, so I was asked where was he performing since I would love to see him. He told me  where he was performing and mentioned he’s performing this coming Friday too. I said, “Maybe I will be available Friday to make that performance.” I finished up by telling him to have fun and he responded by saying, “thanks!”

But get this –  later that morning at 4:12am, he sent me a text saying, “The performance was awesome. I work from 1-9pm at Back Street Concierge. Stop by for a few and we can check each other out. I don’t give out my work address to just anyone.”

I have not responded yet because I was turned off by his text. It seems like he’s acting like he’s prize and not me. Like he’s full of himself. Am I looking at this wrong? He doesn’t even want to go on a date. Like he doesn’t want to take the time and spend the money to get to know me on a first date.

Ronnie, please tell me what you think because this has me really confused.

I understand what you’re saying about wanting to be “The Prize” the way Steve Harvey talks about being a confident woman worthy of a man who treats you well. For the most part I agree with many of his views on dating.

However, in this case, it’s very possible YOU might be sending your own mixed signals. Think about this from the man’s perspective. He tells you he does comedy and is performing that night and a future date. You say you’d love to see his act and might make his Friday gig.

Then you’re surprised he suggests you come by where he works so you can check each other out. You feel slighted and turned off that he never gives out his work address so you are special.

Can you see how you started him down this path by inviting yourself to his performance? You didn’t even know if he’d be interested in him or in fairness he in you right? It was something you said in the first exchanges.  He played along and thought, “Cool, she sounds like fun. I’ll invite her down to work so I can see if there’s any attraction.”

Now you’re insulted and haven’t responded. There is a solution to avoiding this kind of interaction in the future. Let the man take the lead. Don’t invite yourself to see his performance. Respond to him, but wait to see what HE WILL DO to win you over and ask you out. That’s the best way for understanding men and gauging how interested they may be in you. Do NOTHING BUT RESPOND and don’t initiate anything.

I recommend reading my post on the Ballroom Theory of Dating so that you have a better understanding of the best way to handle yourself at the start of dating which is about 6 – 10 dates. After than, your often end up in the  first phase of relationship with exclusivity and things tend to balance out.

Most experts agree you still want to follow a ratio of 3 to 1 for contacting the man until you have a more established relationship (his 3 to your 1) so he doesn’t feel overwhelmed or that his personal territory is invaded.

What to Expect on a First Digital Date

One more thing I want to mention. You were bummed he didn’t want to take you out on a nice first date. That’s a big expectation for a first digital date. Experts agree the first date, often referred to as “Date Zero” is more casual. Think about coffee, a glass of wine or beer. maybe an ice cream or appetizer.

The date should be short to leave him wanting more. Don’t let it roll into dinner because you’re having a great time. Long first dates can give you the feeling you know the man better than you do and a false sense of intimacy.

Women always tell me they don’t usually sleep with a guy on the first date, but a long first date lowers your defenses and before you know it, “It just happened”. This is a seduction tactic men use often because it works.

Keep in mind the purpose of the first date IS to check each other out. So a short inexpensive date is appropriate before a man invests in winning you over. Don’t expect more and you won’t feel so bad and that’s my dating advice about men’s mixed signals.

1 thought on “Mixed Signals – Follow His Lead to Nix Confusion”