Home » Blog » Understanding Men » Why Do Men Pull Away and What Can I Do?

You want to know why do men pull away? Get empowering insights about understanding men, why he disappeared and what you can do in this Q&A post. 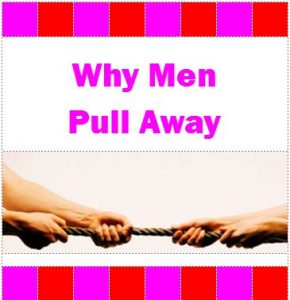 Why Men Pull Away After Getting Close

A man whom I’ve known for 25 years helped me with a work project and I fell for him. We went to lunch and had coffee many times over the past few months (he always paid). Went to a movie and also had dinner a few times.

He told me he liked me and I said the same about him. I see how he looks at me with desire. He even told me I have this sexiness about me! But now he says he’s been alone for too long to get involved again. Then in the next breath he asks me out to see a movie.

Right now he seems to be a ghost in terms of spending time together. So how come, if he sees me, he always stops to chat? What the heck is going on?

I guess it’s not the right timing for him, but I can’t stop thinking about him. What can I do?

Thanks for your advice in advance,
Casandra”
Hi Casandra,

I feel your pain and I know how hard this is for you. So many women ask me, “Why do men pull away?” When a man sends mixed signals like this it’s terribly tormenting. But I’m going to be straight with you so you know the truth.

Why Do Men Pull Away? There Are Many Reasons!

Why men pull away when things get serious causes emotional distress for women all over the world. There are countless reasons for why he disappeared or put distance between you. It’s a gigantic red flag because it points to his inner conflicts that are keeping him single. And he is the only one who can resolve them.

Nothing you do can shift his inner conflict for him.

In this case, there is another problem getting in the way of you connecting.

When a man tells you he doesn’t want a relationship by saying something like, “It’s been too long,” there is absolutely nothing you can do. Any time a man says something to push you away, believe him. Take him for his word when he says:

What all of these lines have in common is what MEN DO NOT WANT – which is a serious relationship. Even if he’s willing to get to know you to see where things go, that’s just a DISTRACTION from the first part of the sentence which was HE DOESN’T WANT A RELATIONSHIP.

See, a man has to want the same thing you want for things to work out. In other words, you both need to have the same agenda. Or at least he can’t be ruling out the relationship agenda.

THIS IS A MAJOR PIECE OF COMPATIBILITY that most WOMEN IGNORE. We do this because we think his obvious interest is enough. Unfortunately…

Attraction, attention and chemistry are NOT ENOUGH to build a lasting relationship.

A man has to WANT a RELATIONSHIP or not be opposed to getting seriously involved for things to work out in the long run. If his desire is not present, then all the flirting, butterflies, and interest will not shift into the romance you want or lasting love.

Should You Wait Hoping He’ll Come Around?

If you decide to hold out hope for this guy, here is what’s going to happen. First you won’t notice other men who are interested because you’ll be wrapped up with this guy. Your heart will not remain open to men who do want a relationship. So you’ll miss out on other prospects. And ultimately staying attached to this guy will keep you stuck in desire for him and …single too.

The best thing you can do is steer clear of him for long enough so you can detach. Let your feelings die down. Out-of-sight really can help a lot to get him out of your head and heart. The last thing you want to do is think you are a victim of your feelings and you cannot help it. This is a powerless stance and definitely, 100% NOT TRUE.

It might not be easy but you can let go and move. Especially if you want to find real, lasting love. Hankering after Mr. ItsBeenTooLong will make you miserable and keep you single. Don’t do it. Here are some empowering suggestions to help you let go:

Once you manage to detach and the longing subsides, then you can be friends if you want. I don’t recommend this but with enough time it can be possible.

So Cassandra, that sums up my answer to why do men pull away, Most importantly, they are not relationship ready and the minute you figure this out about any man, the very best thing you can do is move on. There are plenty more fish in the sea and men who would be more compatible partners.

2 thoughts on “Why Do Men Pull Away and What Can I Do?”