Let a man pursue you – that’s the #1 thing you can do get him invested in dating you. Follow his lead for the lasting loving relationship you dream of. 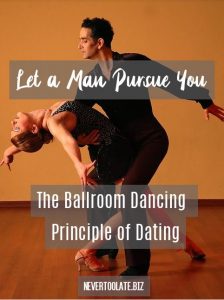 How To Let a Man Be a Man

Right now I have an awesome single guy as a client. In his early 50’s, Rick has shared with me the ups and downs of his love life. He felt ready to date again, but wanted to avoid some of the painful mistakes he made in past relationships. I have been very excited to guide him on this journey, as he’s a great catch.

After starting with me, he was nervous on his first date and let the woman lead the conversation. She went down the unfortunate road of discussing past relationships and he followed her there. Then, Rick noticed the energy between them diminished immediately following this conversation.

They talked about getting together again and his date said she’d let him know what was good. He told me he left the ball in her court. (Oh no – that’s a big dating mistake for a man!)

Who Should Lead the 1st Few Dates? 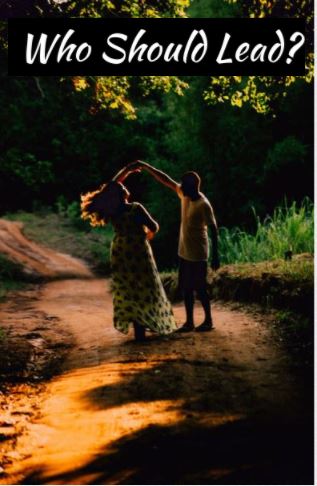 Let’s talk about who should lead on the first 4-8 dates. I explained to Rick about my “Ballroom Dancing Theory of Dating.” In ballroom dancing, there is only one leader – the man, and one follower – the woman. This strategy works best for the first 4-8 dates, (8 is better) depending on the couple, for so many reasons.

When you let a man pursue you and take the lead, you can observe what he’s willing to do to win you over without your prompts. This is essential to discover his interest level.

Does he take three weeks to call for a second date? Or does he ask you for a second date within three days? Obviously the quicker he gets in touch and asks you out, the greater interest he is showing. In this case, texting does NOT count – only his efforts to see you.

As the woman, if you can’t handle waiting or think it’s unnecessary to let a man pursue you, you might call and ask when you can see him again. “Are you busy this weekend?” might slip out of your anxious lips. This is not a good dating strategy for women.

Can’t Take the DNA Out of Dating

Now that the genders achieved greater equality in the work place, women think it’s perfectly fine to initiate. You want to call and ask him out, be direct and say what’s on your mind or shoot the breeze.

Unfortunately dating has not caught up with equality in business. Dating is still an archaic mating ritual based on biology. Sorry to say, you can’t take the DNA out of dating – not yet. 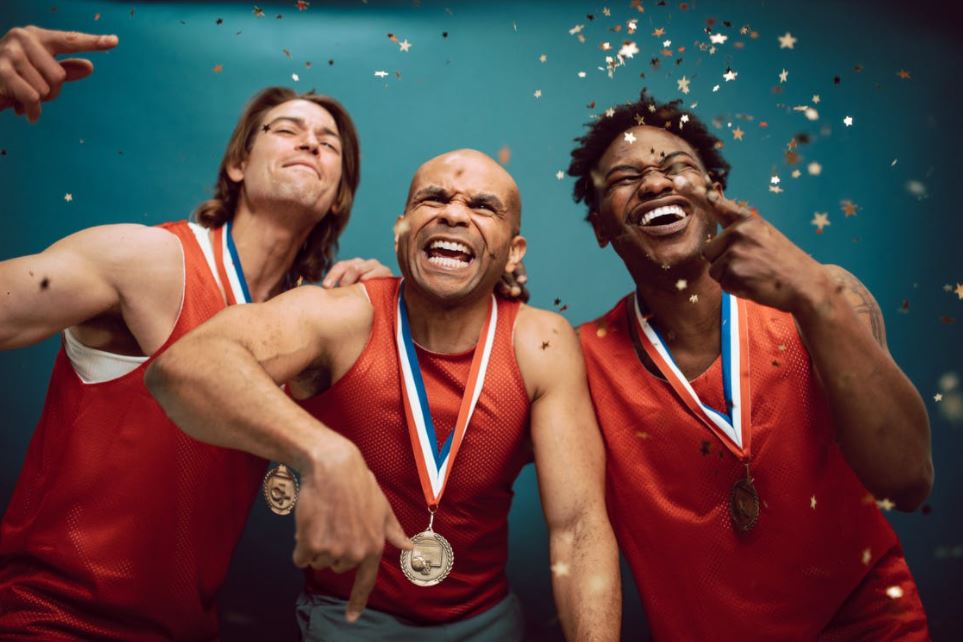 What does that mean about DNA? See a man has hunter instincts coded into his DNA. The hunter wants to win. He enjoys setting his sights on a woman and then doing what it takes to win her over. Dating you needs to be his idea.

Once you are into the relationship (after 8 – 12 dates) then the chase is over and the communication can be more balanced. However, as the woman, if you don’t wait and try to take over pursuit, you can lose big time.

Instinctively, most men (over 40) know leading is their role in dating. They know they must pursue you to win your heart. So, when you take over his role and chase him, it’s often a turn off. It destroys the sexual tension that otherwise builds between a man and a woman and can make you unattractive or push you into the friend zone.

When you chase him, he’ll no longer be guessing if you like him or not.

There’s nothing to win and no reason to strive for your attention when you serve yourself up on a silver platter. When you call or ask him out early on, you take all the challenge and mystery out of the process causing a man to lose interest.

What Makes Him Pursue You?

That’s why you want to let a man pursue you, so he gets invested in winning you over!

Making yourself too available by initiating contact or asking him out ruins the magic and eliminates the mystery. Instead of appearing independent and confident, you end up looking aggressive, needy or desperate! These are not traits men seek in a woman.

My steadfast dating advice is:

DON’T CALL OR ASK MEN OUT! 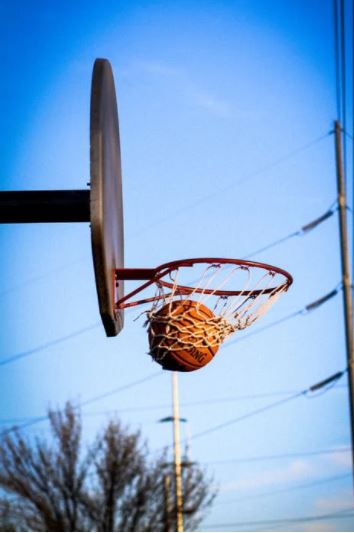 To be crystal clear, I want to share Rick’s email with me after we talked about the “Ballroom Dancing Principle of Dating.”

At this point, Rick totally understood why leaving the “ball in her court” was a passive move that would get him nowhere. This was how he tried to ward off rejection. He thought by leaving the next move up to her, he could avoid hearing her possibly say, “No” to his next invitation.

Now, Rick Gets It!

I’ve been thinking a lot about the Ballroom Dance analogy and wow, that’s really powerful.

When I actually took Ballroom Dance lessons, I was really nervous and awkward at first and didn’t know what to do. Gradually, I became more confident. As my confidence grew and I had more lessons, this is what my instructor taught me.

My Job as the Man:

1) Lead – never, ever let the woman take the lead. Never. Ever. Period. This was drilled into me.

2) Make the woman feel that she is the center of attention and the most beautiful, graceful being on the planet.

3) Have a plan on the dance floor and know where you’re going – the woman usually can’t see where we are going because she’s facing backwards. It’s the man’s job to keep a woman out of trouble and on the right path in dancing.

4) Lastly, leave past mistakes in the past. You can’t do anything about them. Focus on the here and now and the immediate future, to avoid more mistakes.

When I learned to put these concepts into place, my dance card was always full and I never sat down at a dance party. In fact, the Dance Studio I went to stopped charging me for coming to the dances because they wanted me to keep coming as I was an excellent dance partner.

So now, I’ll compare this with dating. I’m like a past dance master just getting back into dancing. But instead of dancing, I’m talking and thinking about my past dance partners! What I should be doing is leading and making the woman feel special. And I don’t have a well defined plan or letting go of past mistakes.

Most importantly, if I don’t get this under control, I’ll be sitting out most dances (figuratively speaking) and ruin my chances to find a new partner. Now I know what to do and how to do it.

Time to get off my duff and start leading again!”

Let a Man Pursue You! 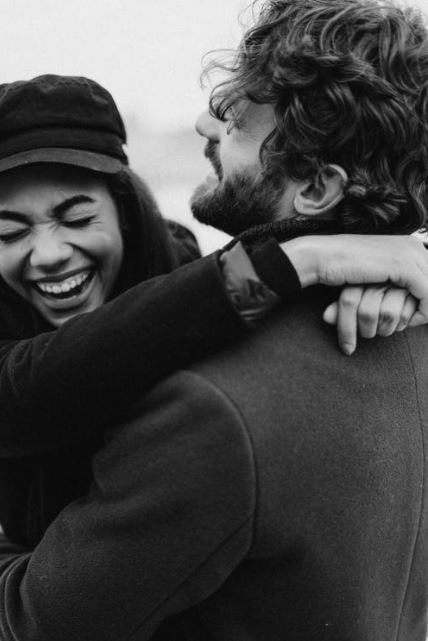 You can only imagine how excited I was when I got this email from Rick! He had forgotten what his role was in dating AND dancing. Rick needed to step up to be the leader if he wanted to find the right woman.

Finally, he could see avoiding rejection was becoming a self-fulfilling prophecy of rejection. To find love, he’d better take charge.

This is why when you meet a guy who is too nice, he has usually forgotten that he needs to lead. And guess what, you find him unattractive! So, you must let men be men and take the lead. Let a man pursue you.

Promise You Won’t Take the Lead

Sit back and let a man pursue you. If he calls, call him back. When you have fun, tell him at the end of the date. Just don’t call him, ask when you can see him again for at least eight dates in a row.

Give yourself the chance to find out how much a man is interested in you and what he will do, on his own, to win you over. This is the best way for understanding a man’s intention.

Let a man be a man and do the work so the sexual tension builds and he gets invested in you for a lasting, loving relationship.