How to know if he’s a player matters to every single woman on the planet. If you’ve been taken in by a sweet talker find out the signs to watch for. 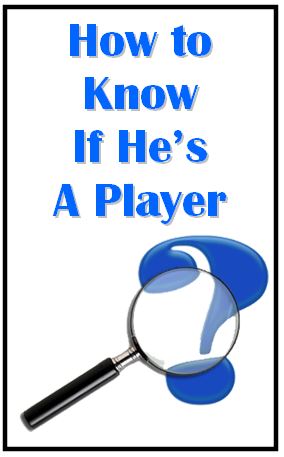 Spotting a Player Is Simple When You How

You go out to mingle and meet an amazing guy. He’s handsome, well-spoken and worldly. He flatters you and makes you feel very special. You feel an incredible connection so quickly and the chemistry is off the charts. Even though you just met him, you feel like you’ve know him forever.

Most likely, you’ve met a player.

What Is a Player?

A player is a man who seems to know every hot button a woman wants to hear. Regardless of which woman, he can figure out what makes you tick and he’s soooo good at it. He’s a pro at seduction. Somehow, he seems to have read the book on women because he knows exactly how to make you fall for him in an instant.

Too bad you’ll never see him again. He’s a player and is only interested in the conquest – then he’s off to find another unsuspecting single gal.

After you feel hurt, used and so very sad. How could this have happened to you? Why would he do such a thing? He seemed like he really liked you. How could you be such a poor judge of character?

You curse him and then you beat yourself up for being so foolish to be taken in by the likes of him. You think he’s the scum of the earth and totally romantic at the very same time. It’s so confusing and devastatingly emotional.

Has this happened to you? I know how painful it is because I’ve been through it myself. But don’t be too hard on yourself. We all have a romance novel in our heads and sometimes we fall for it. Join the club!

The trick is to pick yourself up, dust yourself off and go back out there to meet new men – better, more sincere, guys. And of course learn how to know if he’s a player!

5 Ways to Spot a Player

Below I reveal how to know if he’s a player which you can usually figure out fairly quickly once you know the signs to watch for.

When a man is so into you within a matter of minutes, beware! You probably wonder why he’s so into you but it feels so good to get this attention, you push your rational brain to the side. Soaking in the attention awakens desire that may have long been dormant.

Sit back and think about this objectively. No man can be that interested that quickly. It takes time to get to know someone. He may be incredibly attracted to you but that doesn’t mean he knows you – and you don’t know him either. Don’t fall for this player even though he’s dreamy.

Maybe you meet this guy online and before you even meet, he opens up deeply and shares private details about his life. You cannot believe it! He must be into you or why would he tell you those personal things?

This player creates a deep level of trust by sharing his life. It’s seductive. When you are mesmerized, he pulls you into his web and sleeps with you. Then he disappears. Don’t be fooled by this player type who shares deeply. You need to get to know him over time just like any other man.

This man is a master of charm like George Clooney. He’s got a twinkle in his eye which lets you know he’s got some mischief in him. His wonderful laugh makes you feel fabulous. He looks deeply into your eyes and sees your soul. Then you are lost.

A charmer looks for women who have been deprived of attention and knows when he pays attention to you, gets close, touches you, you will melt into his hands. enjoy the charmer but hold off on sleeping with him to see how long he sticks around. Usually – not very long.

A man with a sad story takes advantage of your caring nature. He knows some women are uncontrollably drawn to men who are down on their luck, especially with love troubles. Maybe he had a wife who didn’t understand him or treated him poorly. He pulls on your heart strings and you can’t stop yourself from wanting to help.

But Mr. Sad Story is not your problem or your project. My advice is to let him figure out his own solutions. A man is not a lost puppy, so don’t put yourself out to save him or he’ll take everything you’ve got. Even if he’s not after your money, he can drain your energy and life force from you. Stay clear of this player type.

There are men who will tell you on the very first meeting and sometimes in the email or phone call before you meet that they already know you are “The One.” He is similar to the guy who is so into you. He’ll tell you that you are the woman he’s been waiting for and hoping to meet.

The problem is this is total nonsense. No one can tell that fast and even for people who said they knew the minute they saw a woman they’d marry her – they certainly don’t say that out loud! A man only shares such an emotional reaction because he knows that will bring you close and help you trust him.

Too bad he’ll break that trust quickly once he gets into your pants. If you ever find yourself amazed that something so wonderful is happening to you so quickly and are being swept off your feet – STOP! Remember if something feels too good to be true, it usually is.

Players Come in All Ages

Yes there are players in their 20’s and 60s. Don’t think for one minute that older men wouldn’t bother with such hi-jinx. Or yes they will if they want to get you into bed. Age is not relevant when it comes to players. The little blue pill (Viagra) has made this all possible.

How to Know If He’s a Player

So those are five of my best clues to spot a player quickly. Most of the signs boil down to not falling for a man in a night or two just because he’s playing these games with your head. Know that if he’s sincere, he’ll wait to sleep with you. Hold off and get to know him over time. That’s the bet way to guard your heart and keep yourself safe from players.

Ready for more savvy dating advice for women? Get my free book 7 Dire Dating Mistakes That Keep You Single