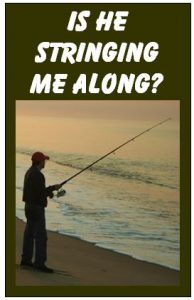 Is he stringing me along? The sooner you know the answer to this painful question the better so read on to discover the signs.

How Can I Tell If He’s Stringing Me Along?

I met this med student on a dating site and we’ve been chatting for 3 months through snapchat, instagram, facebook, and text. We have so much in common and he’s really nice. I’ve given him hints to meet multiple times, but he keeps playing games.

One time he was going to come to see me (he lives 2hrs away) and he flaked the day before. I know he’s busy with med school, so I was okay with it. I told him to let me know when he’s not too busy. He asked me a few times what my plans were for the weekend. He had activities in mind and got me really excited about finally asking me out. Then we’d go on to talk about other stuff and forget the plans.

I asked him again yesterday to go biking, he said he’d love to, but that was it. He didn’t even talk about when we could do that. I don’t get it!

Is he stringing me along? Sometimes I wonder if he’s really busy or he’s afraid that if we finally meet, he’d scare me away. (He said that’s happened before.)

What should I do? He still keeps on snapchatting and texting me. Should I stop communicating with him? Or give it another chance? I don’t want to be super attached because it will break my heart if this goes nowhere.

Thanks for your help,
Done in Denver

9 Signs He’s Stringing You Along

I know this isn’t easy for you. You’ve gotten emotionally invested and keep hoping he’ll come around and finally ask you out. At the end of your note, you say you don’t want to be super attached because you’ll be heart broken, that’s a clear sign you already are attached. There’s no getting around that fact.

Sadly, you don’t really know this man regardless of how much time you’ve spent chatting. You only know what he shares through text and social media. Honestly, he might not be a med student or live two hours away. When a man won’t meet you, most often he’s not who he says he is.

Could he really be afraid you won’t like him? Only if he’s not who he says he is. What about him has scared other women away? That’s a big red flag in my book and one I don’t believe for a minute.

You are not the only woman who has fallen for a guy who can’t seem to ask you out or keep a date. I’ve answered questions like this from many other women on my blog with this same sort of story. It’s an epidemic.

1. More Than 7-10 Days Without a Date – Seriously, no matter how much fun you’re having, don’t continue texting, etc. with a man who doesn’t have time to meet you. Read more about the problems with “virtual relationships“.

Either he already has a woman and is cheating emotionally, isn’t interested in a genuine relationship, doesn’t want to get involved, is wounded and not capable of a relationship, or is boosting his ego. None of these are good reasons since you are looking for love.

2. Too Busy to See You – Being busy is the perfect excuse not to see you. It might be work, school, a big house project, helping out a friend or something with this ex or his kids. Even if his excuses seem legitimate, he’s letting you know he’s not really available. A man who wasn’t a relationship WILL ALWAYS MAKE TIME.

3. Cancels Multiple Times – This guy makes plan but then something comes up and he cancels. And this happens more than once. That’s your signal he’s stringing you along. How many times should a guy flake on you before you give him the boot? Twice, then move on. Once- anyone can have plans change. Twice is the start of a pattern.

4. Tells a Sob Story – This is a trick often used by scammers. They tell you a tale of woe so you feel sorry for them. it could be health, family, legal or financial problems that a man shares to draw you in. He is playing on a woman’s naturally strong empathy so you want to stick by him, help him and show him the world is a good place.

5. Long Distance Encounters – So many women fall for guys who live in the far away. Whether he’s a few states away or in another country, he’s not geographically desirable. Having a simple date is out of the question. It becomes a big ordeal to see you and requires planning a trip, taking time off, and overnight visits.

This is great for fantasy and might be a highly romantic and fun fling. But the chances of something like this blossoming into a lasting relationship are just about…zero. The distance makes a simple date impossible, so don’t even get started. Look locally for love and avoid this heartbreaking trap.

Now, let’s say you actually are dating a man who you fear is stringing you along. Here are a few signs that’s happening as well.

7. He’s Separated – He may say he’s in the process of divorce, but a separated man is NOT divorced yet. It takes time to heal from divorce, but first you have to GET DIVORCED. Chances are you’ll be pulled into his drama and ride an emotional roller coaster that stresses you out. Therapists agree the best solution is not to date men who haven’t been divorced for at least a year.

8.  No Labels –  After a few months of dating you want to be “boyfriend and girlfriend” and don’t like when he introduces you as his “friend”. If you ask him, he might change the subject, be evasive, ask for more time or say he’s not into labels and doesn’t want to define the relationship.

This puts you on alert that he’s not serious about you because a man who wants to keep you around will do what it takes to make you happy.

9. Long Distance Relationships– Maybe you’ve actually gotten together with your long distance guy. Whether its one or a few times and regardless of how intense the romance is, a long distance guy might not be capable of or want more. The distance is perfect for him so you don’t crowd his style or try to take things deeper.

If he doesn’t start introducing you to friends and family, don’t involve you in his life or tell you his future plans (with you in them) you are at risk of heartbreak and wasting time.

So, Is He Stringing Me Along?

If you are thinking this, the answer is YES!

What should you do? Stop responding! Stop communicating and unfriend or unfollow him on all social media. Block him on your phone too.

OK, this happened to you had you’ll feel sad for a while. But you are not giving up anything because he was never serious about you. His actions have proved that. Let him go and move on to find a local guy who wants to spend time with you and asks you out weekly to find a lasting, loving relationship.

1 thought on “Is He Stringing Me Along? Understanding Men”