Home » Blog » Understanding Men » Is He Playing Me? Dating Advice for Women

If you wonder, “Is he playing me?” chances are he is. 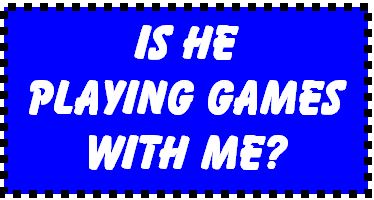 I actually experienced nearly every woman’s dream come true. I was approached by a hot male celebrity at an event. He came up to me and said ‘haven’t you seen the way I’ve been looking at you all night’ and I will be completely honest with you, we hit it off straight away.

We both were not interested in getting serious – it was just a friends with benefits relationship. After a month of us hangin’ together I never heard from him again so I messaged him to take care of himself and told him it was fun. I didn’t receive a reply and I never texted or called him again.

It’s a year later , and to my surprise I received an email from him asking for my new number saying that he hasn’t been able to get me out of his mind and how much he wants to see me again and make me his! I messaged him back my number without saying anything else.

He apologized for how he ditched me last year, I told him that as far as I was concerned we were not in a relationship so no hard feelings from my side and that I just got on with my life. He said wow! You are such a great girl. He said that he was very busy out of the country and he would take me out soon. He messaged everyday for three days, then I sent him two messages which he’s ignored for eleven days. I have not messaged or called him since.

What is going on? Do you think he has gone off me? Is he trying to use reverse psychology to make me want him more? I get the feeling I may have made him feel he is more into me than I am into him.

This guy could have any woman he wanted. Is he playing me? I still do not wish to be in a relationship with anyone, I have not been sexually active in 7 months out of choice which he also knows, could that possibly be off putting?

I was fine before he got back in touch with me, now he’s all up in my head! I am ignoring him back but starting to feel frustrated.. Am I doing the right thing?

I want to say that any man who contacts you to make you “his,” then ignores your texts and disappears is full of poop. He probably doesn’t have one drop of relationship integrity. When you find yourself wondering “is he playing me?” he probably is. It doesn’t really matter if he’s trying reverse psychology or what he’s up to, you don’t need a game player. That’s sure to bring you heartache.

If he does contact you again, don’t respond unless you want more of the same.  My dating advice is to drop him like a hot potato.

Let’s talk about how you seem conflicted about relationships. You say you don’t want to be in a relationship, yet you are all upset this guy is ignoring you. That’s a conflict right there. You can’t be both, so I suspect that you do want some kind of relationship. Be honest with yourself about what you really want from a man. Getting clear can help you avoid heartache.

Friends With Benefits by definition, is a no strings attached, casual relationship. That can work if you don’t want something serious. Trouble is, it seems like you like him more than you say and DO want more. You are excited at the idea of being “his”. Again, be honest with yourself about what you want. This celebrity isn’t the right man, but there is one out there for you.

If you want more dating advice about hanging out and hooking up, check out this post.

It’s possible that he got in touch with you because he remembered something nice about you and wanted to feel your adoration. Some stars are insecure like anyone else. Truthfully, that has nothing to do with him really wanting a relationship with you. If he did, he knows exactly what to do. The fact that’s he’s not in touch shows you he’s not serious.

I wouldn’t worry if you didn’t seem into him enough or if he’s playing games with you. He’s proved twice now that he is unreliable. Let him go. You had your time with a celebrity. Enjoy that fun and fond memory. Move on to look for a man who wants what you want – A RELATIONSHIP.