Are you wondering, “Is he into me?” about the man you’re dating? If his inconsistency is confusing the heck out of you, please read on so you can understand men who behave this way and learn what is going on. 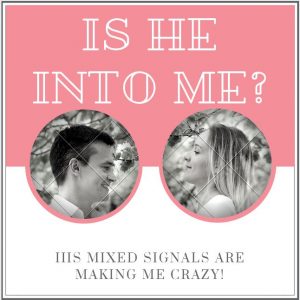 Is He Into Me or Wasting My Time?

I met this guy a year ago in a language course. From our first meeting there was a “spark” between us. During the course, we didn’t have any private interactions. Three weeks after it ended, he started texting and calling and finally we had coffee. He showed up 10 minutes late and told me he had one hour because he had to work.

After, he called and told me how he couldn’t stop thinking about me and that we should meet again soon but then he disappeared for 2 weeks! When he called again he told me he was super busy at work. I know he’s a workaholic, but this is BS, right? Is he into me?

During the next few months we met only twice, both times at my place – he offered to help with heavy lifting at my apartment. He didn’t even try to kiss me. He called after, telling me how he missed me already and that I am such a great girl.

We made plans to meet on several occasions, but he always canceled. I know for a fact he’s neither married nor in a relationship. He loves to contact me when he’s with his friends so that they can hear him flirting with a girl. When I text or call him, he sometimes he doesn’t respond. But if I treat him the same way, he calls me out on that.

To sum things up, he’s been hot and cold and sending mixed signals from the beginning, I know I deserve better, but I really like him. I still hope that maybe he just needs more time? I feel like such an idiot.

Please tell me what you think about this guy and what I should do.

Thanks,
Dangling in Denver”

So you’ve been communicating with this guy for months, but haven’t kissed. His pursuit of you is inconsistent. You also say he likes to show off his flirting with you – hmmm, could he be gay and keeping you around to look straight to his friends? Just a thought.

You ask, “Is he into me?” I have to say “No” or certainly not enough for true, lasting love.

When a man shows this much inconsistency, he’s letting you know you are not his priority and he is NOT serious about you. This will NEVER change or improve with time. Men are at their very best in the beginning and you are way beyond that point. You are holding out hope for a man that will never come around to be the boyfriend you long for.

Don’t be too hard on yourself about this situation. Plenty of women go on hoping for months and sometimes years that a man will somehow change to fit their vision of a good partner. It just won’t happen.

Your Strong Self-Worth Is Empowering

Here’s the good news! You already know you deserve better treatment. Strong self-worth will keep you from hanging on to this guy who is most definitely Mr. Wrong. You want to date a man who consistently sees you at least weekly and stays in touch as well.

Your Signal to Walk Away or Run!

When a man leaves you dangling and wondering, “Is he into me?” that’s like a big fat neon sign blinking NO HE’S NOT. A guy who disappears is telling you he’s nowhere near thinking about commitment and your signal to walk away. Who needs the emotionally unsatisfying, hot and cold and on and off again man? Not you!

How You Know He’s NOT “The One”

Even though you like him, he has proved over months that he’s not the right man for you. You have to like the man as a whole person. Stop focusing only on the parts you like and see the big picture of who he really is. NOT BOYFRIEND MATERIAL.

How to Know He’s a Keeper

There are plenty of men out there and you deserve to be with a man who wants to spend time with you. You want a man who cares how you are and doesn’t evaporate for weeks at time. You seek a guy who includes you in his life and introduces you to family and friends. You’re looking for a supportive fellow who doesn’t think only of himself.

The right man finds time to see you no matter how busy. He cherishes you, feels lucky to have found you and lets you know how he feels. That’s when you know you found a keeper.

So with compassion and kindness, I encourage you to stop engaging with this guy and move on to find the right man for you. Make a vow to yourself to stay strong and never allow yourself to be dangled on a string like this again.

6 thoughts on “Is He Into Me? His Mixed Signals Are Making Me Crazy!”