True Love Is One Thing, Flirting Is Quite Another. 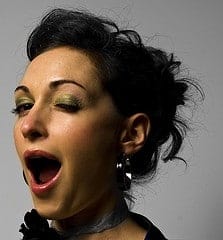 Flirting is fun and exciting, but it doesn’t mean anything. If you’ve been flirting for years with the same man hoping he’ll ask you out some day, here’s my dating advice for women.

I’ve been flirting with this guy from work for two years now. He flirts me back and seem very interested. He’s my dream guy .and acts like a gentleman when he is around me. Our co-workers see we have an attraction and sometimes tease us about getting together BUT he has never taken to next level. I keep on myself wondering why and what can I do to change this scenario? I even considered asking him out but had never the guts to.

To tell you the truth I’m quite tired of this flirting game, and reading your post about flirting, I need to consider if he really wants me. This is quite tough on me  – to realize the past two years was a waste of time and now I have to let him go for my own sanity.

Anyway, thank you for the post and I guess my next move is to ignore him and move on, right? Wow – this ll be quite a challenge as I see him everyday at work and, I was really hopeful to be in a relationship with him since I really like him. Somehow I thought we eventually would get together . I feel like a gambler that just loss all in a bet, quite sad, but I’m glad for a reality check.

If you have any tips please let me know because right now I feel quite lost.
Thanks,
Lost in LA

I realize this is hard since what you’ve been investing in emotionally and  hoping for over the last two years is now clearly not going to become the relationship you wanted. It is a real loss for you because you had all your dreams of love hanging on him.

This is why I tell women not to focus on one man until you discuss and agree to be exclusive. Until that point, you should keep your options open because you never know which guy will stick around, ask you out, treat you right, or want the long-term relationship that you do. You are living through what happens when you focus on one guy who doesn’t turn out to be your true love.

I do have one suggestion which you brought up yourself. While I ‘m not a big fan of asking men out, this is one time it might be worth it. This does take a bit of chutzpah and nerve. Next time he flirts with you, turn things around on him and say, “I always have fun talking with you. Let’s grab a drink Thursday night – are you free?”

By asking him in this way, you are taking the step he never has. Now it’s true, after two years of flirting you might think if he was going to ask you out he would have done so already. And I do agree with that. But by doing this, usually one of two things will happen.

1) He’ll go out with you and if things go well, he may ask you out for another date.

2) He’ll stutter, mumble, feel embarrassed and then leave you alone – because he never had any intention of dating you.

The truth about flirting is that its fun, it feeds the ego and its relatively harmless. So a man who is attached can flirt and not feel bad because he doesn’t cross the line on cheating.

Never Ask A Man Out Twice

Once is enough to get the ball rolling if he really needs that. Some guys are nervous about rejection. I’m frankly shocked to discover that today there are guys who just can’t get up the nerve to ask and face possible rejection. They want “feedback” from the woman before they take that risk. That makes me sad, but I haven’t encountered more an more men who feel this way. They have been beaten down by cruel thoughtless women who doesn’t respect what it takes to ask them out.

That’s doesn’t mean you owe a man anything just because he asks you out – except basic human courtesy. You can say no without being mean or heartless.

So I have become more aware that this is going on out there and as a result have softened on my philosophy of not asking men out. However, never ask more than once. If a man can’t get it together to ask you for a second date – WALK AWAY. Or you will have to do everything in the relationship for as long as it runs.

When you ask a man out more than once, you are chasing him. And truth be told, some men are flattered even if not completely interested. So they say yes to see what happens. maybe they’ll get lucky because you seem desperate. It wont’ be interpreted well or positively so just don’t do it.

As for help on how to let go of him and feeling sad, it will take a bit of time. Here are some steps you can take to move the healing along:

News Flash – He’s Not the Only Man Out There

The best news is that Mr. Flirty Pants is not the only fish in the sea! There are so many single men out there and the right one for you  does exist. When you are ready, you just need to get out there and mingle, smile and be friendly. Try online dating, singles dances, speed dating if that’s in your area, Meetup.com groups etc. You can find true love if you make dating a priority. The more men you meet, the better your chances for finding a good match.