This question, “If he texts me everyday does he like me?” plagues many single women. Learn how to read between the lines of how men think to get help understanding men. 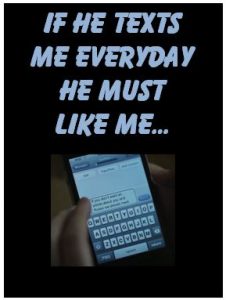 It’s a Good Sign If He Texts Often Right?

I have a male friend who was talking to his guy friend and I came up in conversation. Apparently I sounded interesting so the friend started texting me.

We’ve been talking for about a week and a half now, and he has made no move to try and hang out with me.

He’s had several opportunities, and even though he sounds extremely interested, he always has an excuse for why he can’t go.

We talk for hours and have talked about very real and deep subjects. He’s very intelligent and kind, but I’ve been told he’s kind of awkward with girls.

We see each other sometimes in passing, but we have never had a real face-to-face conversation.

If he texts me every day, does he like me? Should I continue to pursue him and ask him out? Or should I just let him go?

I know we are both interested in each other, and we seem to have a lot in common and a similar sense of humor. I’m just wondering why he isn’t making time to hang out with me.

Thanks for Your Insights,
Amy”

Sorry to say, you might be waiting a long time with this guy for several reasons. Many women mistake a man’s frequent communication for genuine interest.

When you ask, “If he texts me every day, does he like me?” that’s your tip-off something isn’t going right.

1. He Told You He’s Awkward with Girls.

That’s a HUGE excuse to keep you at arm’s length. This is your biggest clue he doesn’t want to date. He’s more comfortable virtually.

Think about it objectively so you can see what nonsense that is. How could a guy talk about deep subjects and at the same time be awkward with girls?

That’s a man’s way of saying he doesn’t want a relationship.

2. He Makes Excuses Why He Can’t See You.

More excuses! A man who is genuinely interested doesn’t make excuses – he MAKES AN EFFORT to see you and win you over.

He’s definitely not doing that, so it’s time to move on.

3. You’re a Sure Thing But He Hasn’t Asked You Out.

If this was about shyness, you’ve already shown interest in him. Let’s see, hours on the phone – check. Loads of texting – check.

Giving him opportunities to get together – check. But he hasn’t made a move, right? That’s your clear signal HE DOESN’T WANT TO DATE.

4. You’ve Passed Each Other But Still No Conversation.

This is yet another obvious sign this guy doesn’t want to see more of you.

There are so many reasons why he might not want to date you or any woman such as:

The Hard Part about Understanding Men

You are not the only woman asking me, “If he texts every day, does he like me?” So let me be very direct. Texting, long phone conversations,

Facetime, social media – none of these prove a man’s interest. Each one of these options doesn’t require a guy to put himself out or win you over.

He’s NOT DOING ANYTHING but talking and when it comes to love TALK IS CHEAP and MEANINGLESS.

Never take virtual conversation without dates to have meaning. Or interpret his time with you as his genuine interest.

Chances are he’s actually proving he loves the sound of his own voice or gets a kick out of texting. He might be bored at home and you fill his time nicely.

That has nothing to do with his feelings for you.

He Texts Me Everyday Does He Like Me? Learn How to Identify a Man’s Interest

So if the conversation isn’t the proof you need, what is? Pay attention to what a man does to win you over!

These are some of the ways to identify what a guy likes and a man’s genuine interest.

It’s about THE ACTION HE TAKES NOT WHAT HE SAYS. Some offer compliments like how beautiful you look or buy flowers, but not all men do.

Your guy has taken NONE of these important steps so stop letting him WASTE YOUR TIME.

Since he hasn’t asked you out after that much communication and 10 days, HE NEVER WILL. HE HAS NO INTENTION OF DATING YOU.

My last point relates to your question about, “Should you pursue him?” My answer to that question is always a giant NO. I tell my clients to never pursue men.

Instead, let men pursue you because that is the only way you will ever know if he is showing genuine interest.

When you pursue and ask him out – he may say yes and go, but that doesn’t mean he’s seriously interested. It could mean he’s bored and you’ll fill the time.

Or that he thinks he’s going to get lucky since you pursued him, etc.

Read this post on the Ballroom Theory of Dating to better understand men and dating gender roles which still persist.

So, the final answer to your question, “If he texts me everyday does he like me?” is no. This guy is not serious about you and he will waste your time for as long as you wait around for him to ask you out.

My advice is don’t let him waste your time. Cut him off. Stop texting and stop responding. Stop waiting for his nightly calls.

Go out to meet new men because if you want true love, this guy is not the one.

If you want to learn more of the signs that a man is wasting your time, get my Amazon bestseller Is He The One? Find Mr. Right By Spotting Mr. Wrong

20 thoughts on “If He Texts Me Everyday, Does He Like Me? Understanding Men”