You ask yourself, “If he keeps texting me does he like me?” Here’s the answer if you’re ready for the truth and want help with understanding men. 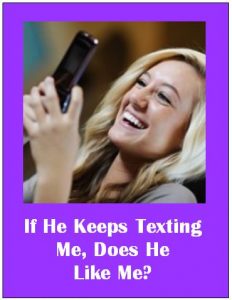 Does His Texting Mean Anything?

I met this guy online two months ago. The 1st month we texted and talked on the phone all day everyday! He was very flirty, started conversations and called me. He always said, “if I was there in person….” After a few weeks I suggested we meet in person. He said he liked that idea, but we live  7 hours apart. So we have not met yet.

After a month his texts began to border on sexual and I flirted back. Next thing his texts went over the edge for a  week. Then he became distant and 4 or 5 days would go by without hearing from him. So I’d text him.

At this point, I was very clear that I wasn’t into sexting and said we couldn’t continue this way. He said he respected that and was feeling the same way which is why he became distant. He apologized to me.

After a week of strained conversation I again suggested we  meet in person. This time he said he wasn’t sure if he wanted to. He was still interested in talking/getting to know me but wanted a clean friendship and then to see where things might lead later.

Since then we continued to text daily, but he was no longer flirty even in a clean way. During the 1st month we would text all day long and he’d call me as soon as he got off work. Some times we’d stay up talking til midnight.

Now He never initiates the conversations.  He usually responds to messages I send him quickly. i have attempted to talk on the phone but he always busy.  I have asked him several times if anything is wrong and he says we’re good.

I’m so confused. I feel like an after thought and he’s not pursuing me at all. When I ask him if he’s still interested he says yes I want to get to know you. But his day to day actions say otherwise.

I really like this guy a lot. If he keeps texting me, does he like me? Do I need to just be patient and give him time to figure out what he wants … or should I close the door and move on?

Wow there is a lot to talk about here!

First this guy was hot and heavy and you texted and talked all the time. He didn’t agree to meet because you live too far apart but shifted into sexting. You put a stop to that and asked to meet again. He said no and became distant. There are many clues about what he wants which I’ll point below.

When it comes to understanding men, this guy took his time showing his true nature. When you asked to meet him and he didn’t jump at the chance. That let’s you know he’s not serious no matter how much time he texts or talks on the phone. He wanted a virtual relationship – a fantasy, not anything real.

Think about it this way – if he were as into you as you were into him, why wouldn’t he want to meet? Men who do this are often married, in a relationship or aren’t capable of a relationship, so they text or talk on the phone instead.

This is what he was really after – sexual fantasy. But you balked and told him no way. Good for you! Boundaries are essential in dating so you did the right thing. Next time, you can get there even faster rather than waiting till a man goes over edge. Feel free to cut it off just at the start.

Clue #3 – He Withdrew and Stopped Initiating

After you set up the no sexting rule, he withdrew and days went by with no communication. In addition, while he does respond to your texts, he no longer initiates at all. That’s your clue things are over.

Here’s what you want to get clear about – he wanted to sext with you and once you put the kibosh on that, he was done. Now he’s too busy to even talk on the phone!

I encourage you to question a man’s integrity when he says something like this, “I want to get to know you and text but not meet you”. How does that make any sense?

What the heck is a clean friendship? Did you want to be his friend? That’s ridiculous.

Why Do Men String Women Along With Texting?

Let’s face it, you were both having fun! All that communication provided fertile ground for fantasy. Sexting is perfect for creating fantasy. A lot of men doing this are married, living with a woman or in a relationship. They do this thinking they aren’t “really” cheating. I disagree with that concept.

When You Ask Directly, Men Will Not Tell You It’s Over

Even though this guy was up to no good in terms of offering you long-term love, he still doesn’t want to be the bad guy. Instead, he withdrew hoping you’d move on. Men don’t come out and tell a woman go away even when you ask directly, “Are you still interested?” He didn’t want to hurt your feelings – he just wanted you for his fantasy. Of course that’s confusing, but it’s the truth.

You say that you really like him, but you can’t know him without meeting him face-to-face and spending time together. You haven’t caught on to who he really is. He’s not at all interested in an actual relationship with you. Otherwise he would have made an effort to meet you.

This guy gave you a lame excuse about distance. Here’s the clincher –  chances are a million to one that any long-distance guy is serious about meeting you. Unfortunately your desire for romance took over here and you got swept up in the fantasy.

A man who is genuinely interested does what it takes to win you over. They aren’t too busy or too far away. This is why I advise my clients and readers not to bother with long-distance men. Hit delete! There are a lot of out-of-state men who will try g BECAUSE it’s long distance which is perfect for excuses and fantasy. They have no intention of ever meeting you.

If He Keeps Texting Me Does He Like Me?

Many women fall into texting and create a connection, allowing feelings to grow. But his texting, emailing and calling mean absolutely nothing without face-to-face, live dates.

Experts call this “The Texting Trap” because it’s such a common mistake. Here are two posts about how texting means nothing and when to stop texting a man.

You asked if you should be more patient? No way! A man like this deserves no additional patience. He wants to fantasize and waste your time.

The very best thing you can do if you want a serious relationship is to stop texting this guy immediately and block him. He is nothing but a distraction for your goal of true love.

The next time you find yourself asking, “If he keeps texting me does he like me?” that’s your signal you’ve been texting for too long and it’s time to move on.

If you are serious about finding love, meet new men who are local. Don’t text with any of them for more than seven days. If you go on a date, then you can text a bit more. However, if there’s no second date within seven more days, stop texting again. Pull back and let the man pursue you. If he doesn’t, then you know he’s not the man for you.

Remember, men need to earn the right to take up your time. Texting for fantasy takes up a tremendous amount of time and emotional band width that will keep you from finding true love.

If you want more insights into understanding men and how to spot the guys who will waste your time, check out my Amazon Bestseller Is He The One? It’s packed with tips to spot Mr. Wrong super fast and only $3.99 US for the Kindle edition (also available as an audio book).