Here’s my best dating advice for women who want a casual relationship and don’t want anything serious. 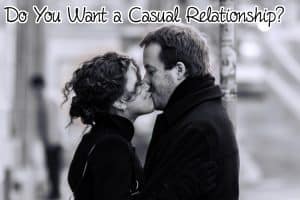 Dating Advice for Women about a Casual Relationship

I met a guy on an evening out when I was away. We got on really well AND had great chemistry. We were both very drunk. Assuming I would never hear from him again and being on holiday, I went back to his hotel and we spent the night.

He added me on Facebook and started chatting. He asked me when I’d be back in the UK and expressed he’d love to meet for drinks. We met up for drinks in London for a first date. It was really wonderful and I felt more positive about this guy than I ever have about a guy in my life.

He gave me a kiss on the cheek and texted me when I got home saying he had a great time. After that, we texted 1 or 2 times a day. Then suddenly he ignored me for 5 days. I messaged him asking if he wanted to meet for a second date, and he said, “Yeah, what were you thinking”. I offered some suggestions and haven’t heard from him for 3 days even though he knows I’m going away for 3 weeks next week.

Seems like he suddenly lost interest – maybe he’s found another woman? What are your thoughts? To be honest I don’t want anything serious, just casual and this guy is the funniest best-looking guy who has ever expressed an interest in me.

Yes I think you are correct – he probably found another woman. He has moved on. But you had a great time and knew the risks, so no big deal right?

Now, let’s talk about the “casual relationship” for a minute. While you say you want something casual, I don’t believe you are being honest with yourself. A casual relationship means no expectations. But this is the “best guy ever interested in you”. That doesn’t sound casual to me. You want more from him. The trouble is, women who say they want causal, often have expectations which is contradictory.

Maybe what you mean by not wanting anything serious is that you don’t want to marry right not. That doesn’t automatically mean you actually are looking for a casual relationship. You want to see a fabulous guy on a somewhat regular basis. That is NOT casual.

You can date a guy, seeing him every week or two even if you don’t want to get serious or marry. But this is not a casual relationship really. it is a committed relationship that doesn’t have to go to the next level.

But a true casual relationship has no boundaries, no commitments, and no definition. Being casual means you might see him when he’s in the mood and you are too. And you’ll never know if you’ll see him again. Now that is casual. Is that what you want? I doubt it since after two dates, you already want to know if I think you’ll see him again.

Casual sex is the same thing. No strings attached. No expectations. You might sleep with a guy every couple of weeks or even more often, but if it’s casual, you cannot realistically have any expectations or you will be sorely disappointed. So I just want you to get very clear about what you are looking for.

Do you still think you want a casual relationship? My bet is, that has shifted for you  if you read this whole post. So, please be honest with yourself. You want to see a guy regularly and enjoy dinners and activities together and that is NOT casual.

Given that, I recommend you don’t sleep with a man for the first few dates. This is not for him. It’s for you. Because eventually this will wear down your self-esteem as not many of these fellows will stick around since they are likely more casual than you are. Once your heart gets involved, you have moved beyond casual.

If you are curious to discover if a man is a player or interested in more than a casual relationship, consider taking my program Is he Right for Me? which starts Monday, May 12th.

4 thoughts on “I Want a Casual Relationship – Not Anything Serious”